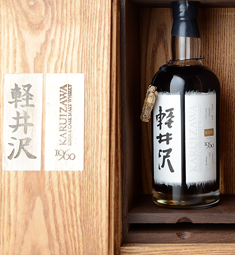 The Nagano Prefecture maker of the mature whisky, Karuizawa Distillery, was set up in 1955 but ceased production in 2000.

However, the UK firm bought the remaining cases of the whisky from the distillery in order to bring alcohol from smaller, independent distillers to a wider international audience.

Modelled on traditional Japanese puzzle boxes and handmade by a British cabinet maker, the Karuizawa 1960 box is adorned with pieces from the original ex-sherry cask head. In addition, the bottle and packaging have been designed by an Edinburgh-based studio.