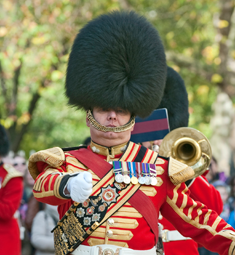 Bearskin caps are an iconic element of the band’s uniform.

As Japan and the UK celebrate 400 years of ties, a stalwart force in Britain’s musical culture is observing over 200 years of service to the Crown.

Founded in 1785, the Coldstream Guards Band is considered one of the most famous military bands in the world, perhaps in part due to the iconic bearskin caps worn by its members.

With only 12 roving musicians at its inception, today the group is 49-strong.

Over the past 20 years, the band has travelled to Japan many times. Most recently it was set to give honorary Japan400 performances between 5 and 14 October across the nation.

“The band is extremely fortunate to have a long-standing relationship with Japan”, said Major Darren Wolfendale, the current director of music.

The group last visited the country two years ago, to give a post-disaster memorial performance in October 2011.

Asked if there was any hesitation about coming to Japan in the wake of the catastrophe, Wolfendale said, “It was decided that the band should not cancel its visit but, instead, contribute to the recovery from that terrible event in whatever small way it could”.

This was not the only occasion in which the Coldstream Guards Band has shown solidarity with a nation in crisis. 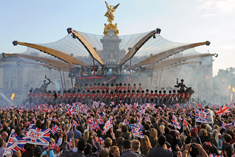 The band’s performance at the Queen’s Diamond Jubilee Concert in 2012, held at the Victoria Memorial, featured Robbie Williams as a guest singer.

The musical troupe was invited by the mayor of New York City in 2001 to perform in Times Square following the 9/11 tragedy that struck the US.

Named after the town of Coldstream in the Borders district of Scotland, the band was formed to support the oldest regiment in the British Army.

Under the leadership of founder General George Monck, the first Coldstream Guards were instrumental in restoring the monarchy after Oliver Cromwell’s demise.

Today, the band’s role is largely ceremonial. It has a higher profile than others of its kind, as it makes regular television appearances and performs at state events, such as the Diamond Jubilee celebrations.

Wolfendale said choosing and writing the music for, and then performing it at, Trooping the Colour last year was a career highlight during his 30 years of service.

The work of military bands, however, goes beyond official state functions.

“I believe that the armed forces represent their country. They are made up of the people and are directed by the government of the day”.

“Military bands are a public manifestation of the armed forces, and when they appear at an event, they represent their country, its government and its people in a professional capacity”, he said. “Music can also bridge gaps that language often cannot”.

The latter seems particularly evident from the reception the band has received in Japan, a nation renowned as a centre of music production and consumption.

“The Japanese people are very knowledgeable about music and culture, and seem to enjoy our blend of traditional British and military musical style.

“Coldstream Guards Band musicians ardently believe in their history and culture, and devote themselves to maintaining the standards of a world-class musical performance. My experience with Japanese musicians leads me to believe that we have a shared passion for high-quality performances”, he said. 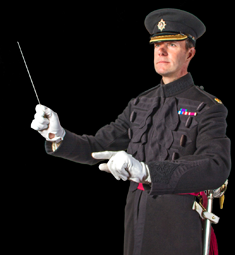 Director of Music Darren Wolfendale has been with the British Army for over 30 years.

When planning the score for a performance here, the band considers what “musical flavour” is the trend at the moment, according to Wolfendale.

He also credits the group’s sponsor in Japan for advice on assembling the repertoire. Bagpipes always seem to be popular.

For the October show, the band plans to feature numbers from Les Misérables, which recently enjoyed success at the box office.

It has been said that Japan is trying to modernise its military bands, primarily those of the Self-Defense Forces (SDF). Though Wolfendale has not had the opportunity to perform with the SDF, he mentioned that he would love to do so.

“Musicians in Japan are of a very high standard and I think we would work well together”, he said.

The Coldstream Guards Band has an eye on the future, a stance that must be closely balanced with the troupe’s historical role.

In fact, the Corps of Army Music has just rolled out a plan for the next generation of British Army performances. In it, the military band authority recognises that its bands currently are multifunctional, but must be repositioned for a more specific role.

“State ceremonial is one [role], whilst performing rock and pop music is another. Specialisation is the key driving strategy behind the latest plan”, he said.

In addition to their duties at popular concerts and state-sponsored events, Wolfendale believes many people may not realise that all army musicians are volunteer soldiers as well.

“Our musicians care deeply about their country and what it is trying to achieve in the fight for peace. Several have been to Afghanistan in a non-musical role, often in very dangerous circumstances and for six months at a time. I salute these individuals for their bravery and commitment”, he said.