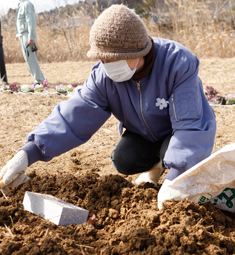 Sakura Namiki Network will use the proceeds from Sakura Front to plant cherry trees in devastated areas.

A charity founded by Japanese people living in London has been inspired by the UK’s Poppy Appeal, the Daily Yomiuri reported on 26 February.

To commemorate the Great East Japan Earthquake, Sakura Front has asked supporters to wear handcrafted brooches made from artificial cherry blossoms (sakura), similar to the artificial red poppies worn each November in the UK and Commonwealth countries to remember members of the armed forces who died in the line of duty during wartime.

About half of the proceeds will be donated to Sakura Namiki Network, an organisation that plants cherry trees in areas devastated by the triple disaster.