Takeshi Kamigouchi’s shirt is drenched, his face slightly sunburnt and his callused hands beginning to resemble those of a hardened labourer rather than a top business executive. “I think I might have overdone it a bit”, he said, leaning breathless on his spade and wiping away perspiration dripping down his forehead. “Sitting in an office all day, you don’t realise just how tough this kind of work is”.

Yet, despite spending the day digging trenches in a small and once-lovely corner of north-eastern Japan devastated by the 11 March disasters, the Unilever Japan president still manages a satisfied smile.

“I think this is an experience they will never forget”, he said, indicating the 35 Unilever employees and four BCCJ members labouring away around him. “I know I won’t”.

The mission with which the 39-strong group of volunteers has been charged is to dig up a corner of the vast 1.5 meter-deep blanket of sludge that was swept inland by the mega-tsunami that struck the area seven months ago, flattening about 100 households that had graced pretty Yagawahama village, on the south-east coast of Miyagi Prefecture’s Oshika Peninsula.

On the land where Kamigouchi and his colleagues work, there once stood a 15th-century temple called Dofukuin, located up a valley about 600m from the waterfront.

Pasted to the windows of the priest’s prefabricated office are photos showing a lovely, intricately carved wooden entranceway and ornate gardens, though the only evidence of that former glory is the hillside graveyard and a few dozen artefacts—Buddha statues, candlesticks, incense bowls—that have been dug up during recovery operations.

More of those treasured items remain buried in the mud, slowing progress and making the work of heavier digging machinery difficult. Yet the enthusiasm levels are high, says Ray Bremner, the firm’s senior vice-president for North-east Asia.

“Our big worry when we first announced this was that we would only get five or six people interested”, said Bremner, who began his Unilever career in 1979. “Incredibly, we ended up with 80 people volunteering and, thanks to that wave of enthusiasm, we’ll be organising a second group to come on another weekend, and hopefully others to follow”.

Despite the summer heat and difficult conditions, Bremner and Kamigouchi both expressed surprise at the work ethic of their charges—particularly the female staff. “You have to remember that these are people who work in the beauty industry, who are normally at the forefront of fashion”, said Bremner. “I hardly recognised them in their overalls and rubber boots—they really get stuck into the work”.

Yukiko Maeno, from the skin-products marketing division, said she had long wanted to take part in some kind of recovery work in the devastated area, but could never have done so on her own. “When I heard about the company’s plan, it gave me a sense of security and I signed up right away”, said Maeno, aged 29, as she filled up a sandbag, hundreds of which had already been piled up as reinforcements along the sides of the excavated channels.

“Nearer to the sea there are no locals around, which gives the feeling of a lost community, but here the temple priest is around and there is a sense of rebuilding. Temples are pillars of such communities so I feel we are making an important contribution”. 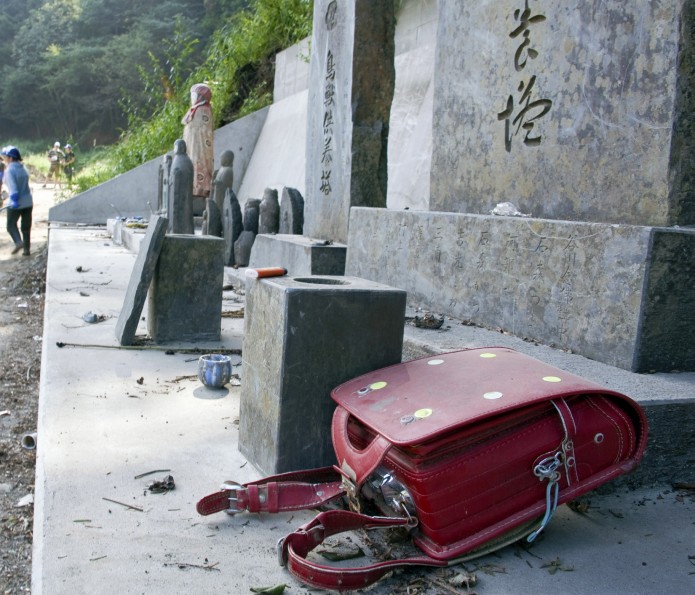 Manami Fukushima, who works in the firm’s customer development department, said she also was glad to be given the opportunity to help. The 22 year-old was only four when Japan’s last major disaster—the Great Hanshin Earthquake—struck her hometown of Kobe, but she remembers the kindness of volunteers who came from far and wide to offer help.

“I was only small then, but I remember the mess, the shock—but also the kindness”, she said, shovelling dirt from a blocked drain. “When I saw the footage on television immediately after the disasters in March, I could empathise with all of those distraught people as they relocated to shelters. I suppose this is a way of repaying the kindness shown to us back in 1995”.

Colleague Dylan Scudder said he was interested to see the influence Unilever’s mission—which, he explained, was part of its “small action, big difference” campaign—would have on a wider scale.

“It is interesting to see how one player’s actions can influence other companies. I see us as one of those massive ships in the Antarctic that break ice so that other ships can follow through. This is a very positive message”.

After a long day’s work, Bremner admits to being a little jaded, but believes the benefits are already tangible, not just for the firm, but for all participants. “I can already see that taking them out of their comfort zone has had very powerful side benefits, including the opportunity to bond with colleagues”, he said. “I can also see that there is something much more fulfilling about cleaning out a temple ditch than responding to 15 emails. It has given them a real sense of pride and purpose”.

Kamigouchi agreed, adding: “I find it extremely sad that so many lost their lives here, but I personally believe a lot of positives have been born from all that sadness, not least of all the values of families and colleagues. It has helped change the mindset of so many people”.