British veterans are returning to South Korea throughout 2010 to mark the 60th anniversary of the outbreak of the Korean War that killed 1,000 UK troops. One group attended the official commemorative ceremony in Seoul on 25 June, the day in 1950 that North Korean forces swept over the border.

South Korean President Lee Myung-Bak presented a plaque of appreciation to the representative of each participating nation. 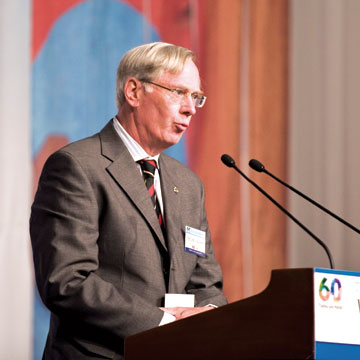 The British delegation was headed by Col George Gadd, president of the International Federation of Korean War Veterans’ Associations. “At the end of the war, Korea had been laid to waste and the people had suffered the trauma and depravation that war brings”, he said. “Korean people thank us, but I am of the view that the UN gave this country a start.

“The rise of South Korea is down to the spirit of determination and the fortitude of its people, and what they have achieved since the end of the war is miraculous”.

Speaking at the Demilitarised Zone, the heavily fortified frontier between North Korea and South Korea, Gadd said, “There is no doubt in my mind that what we did was worthwhile.

“The issue was stopping the spread of communism”, said Gadd, who was a 19-year-old corporal with the King’s Regiment of Liverpool when he arrived in Korea in April 1953.

“If the other side had won, then the heavens alone know what would have happened here in the South”.

In the first major conflict of the Cold War, Britain committed 63,000 troops. The war went on until a ceasefire was signed on 27 July, 1953, with historians estimating that the fighting caused the death of 2 million civilians.

The Duke of Gloucester said at a state banquet for the veterans on 22 June that the Korean War had been a formative event in the lives of many young British soldiers.

“It has continued to define who they are because our generation has never been tested”, he said. “We can see through the history of our armed forces the fact that soldiers today have had to match up to those who have gone before them, and the British public clearly believes they are doing that”.

Many veterans believe it was the West’s “Forgotten War” — with most remembering the bitter winter cold and the incessant summer heat.

“It brings back a lot of memories, particularly of the lads who never came back”, John Lees, 78, from Telford in Shropshire, told BCCJ ACUMEN.

“But it’s funny, I never remember being frightened when we were in the lines”, he said. “I never once thought it would be my time to die, even when I saw other men around me being killed”.
Standing at the DMZ and looking into the blighted North Korean countryside, Robison Brown agreed.
“There was a comradeship; we were proud to show that we were as good as any British soldier before us and it was the right thing to do”, said Brown, 80, of Consett, County Durham.

Lees and Brown have known each other for more than 60 years, a friendship that started before they boarded the troop ship from England to Hong Kong and which grew as they patrolled the border with China as members of the King’s Shropshire Light Infantry. The two men remained together after their platoon landed at Incheon on 13 May, 1951.

Many veterans have fond memories of R&R breaks in Japan—Robison even asking whether a particular shady bar still exists in Ueno.

The worry of war is not comp-letely gone for Lees. His son, Richard, is a colour sergeant with the Royal Signals Regiment in Afghanistan, due this year to complete his fifth tour of duty there.