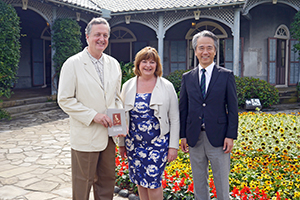 With Scotland’s exports to Japan worth £295mn and Japanese inward investment across the country on the rise, the bilateral relationship is continuing to bloom.

In her first visit to Japan, the Scottish Government’s Cabinet Secretary for Culture, Europe and External Affairs Fiona Hyslop set out plans to strengthen further those business and trade ties, and said Edinburgh was committed to encourage the “many existing relationships and cultural links”.

Indeed, numerous Scots may feel Japan’s influence keenly. Over the past decade, Japan has accounted for 5.8% of all inward investment, and, in 2014, it was the fourth-biggest source of foreign direct investment. Some 80 Japanese businesses with a combined turnover of £1.4bn are currently operating across the country, employing more than 4,500 people.

Meanwhile, between 2012 and 2014, Scottish firms secured six new projects with Japan, creating more than 150 jobs and securing more than 220 others.

Yet, speaking at events in Tokyo and Nagasaki Prefecture during her trip on 29 June–2 July, Hyslop said more could, and would, be done. The Scottish government is seeking to develop Scotland’s exports to Japan, focusing on the food and drink, life sciences and renewable energy sectors.

Worth £90.3mn in 2014, food and drink exports are on the rise, up from £81.9mn in 2013. As 2015 is Scotland’s Year of Food & Drink, the boom is expected to continue. Speaking to an audience of some 40 hoteliers, chefs and retailers in Nagasaki to celebrate the campaign, Hyslop said she wants to get more Scottish produce stocked in shops and featured on eateries’ menus in Japan.

“Scotland’s fantastic larder boasts some of the best natural produce in the world”, she said. “We are working hard to showcase the unrivalled provenance of our products; our unspoiled landscapes, fertile land and clean air … and our understanding of the growing demand for health-enhancing, functional and premium foods”.

To assist with promotion, that effort includes the addition of an in-market food specialist employed by Scottish Development International, the international trade arm of the Scottish government. 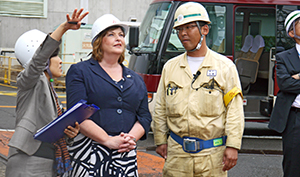 The data, which was documented with laser precision by a specialist team from the Scottish Ten project, will aid the crane’s conservation and management, while also serving as an educational resource.

A collaboration between Historic Scotland, the Glasgow School of Art’s Digital Design Studio, and non-profit organisation CyArk, Scottish Ten is digitally documenting UNESCO World Heritage Sites connected to Scotland—as well as those in the country—to build partnerships based on cultural links.

In this case, the crane was designed by the Glasgow Electric Crane and Hoist Company and built in 1909 by Motherwell Bridge Company. It is still in use, alongside three industrial sites with similar Scottish links: Kosuge Dock, No. 3 Dry Dock and Hashima Island.

Speaking at the presentation ceremony, Hyslop said the Giant Cantilever Crane is “the sister to cranes on the River Clyde, including the “Titan” Crane in Clydebank”. 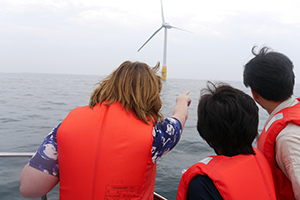 Hyslop opened a new facility at Nagasaki Dejima Incubator designed to help Scottish firms and stakeholders get a foot in the door in Japan’s offshore renewable and marine energy market. The aptly named Scotland House will provide space at no charge.

Obtaining energy from clean and sustainable sources is a high priority for Japan’s government and people following the triple disaster of 2011 and the subsequent controversy over the re-launch of the country’s nuclear power stations. Tokyo has pledged more than £200bn to assist the transition to new forms of power, and moves to deregulate the electricity market to speed up the development of these new powers are also being considered.

With record levels of green energy generation in 2014 and almost half of all electricity used coming from renewables, Scotland is particularly strong in this field. Edinburgh is, therefore, hoping Tokyo will seek Scotland’s expertise. Indeed, the Consul General of Japan in Edinburgh Hajime Kitaoka recently undertook a visit to the Outer Hebrides to research wind and wave power.

Hyslop said the work would build on the legacy of famous Scots such as Thomas Glover (1838–1911), who played a key role in the industrialisation of Japan. Glover helped found a shipbuilding firm, the forerunner of the Mitsubishi Group, and was involved in the establishment of Japan Brewery Company, which later became Kirin Brewery Company Ltd.

Such are his achievements that he was the first non-Japanese to be awarded, by the emperor of Japan, the Order of the Rising Sun.

“This new hub will open doors for the Thomas Glovers of today [who are] looking to use their green energy expertise and build business links in Japan at this exciting time”, Hyslop said.

Glover’s contribution to the Japan–Scotland relationship will be coming to life through a new exhibition at the Aberdeen Maritime Museum, as well as a booklet and trail. Hyslop presented copies of the cultural collateral to custodians of the Thomas Glover House and Gardens in Nagasaki Prefecture.

Designed to feature Aberdeenshire locations that are associated with his life, the trail is intended to interest more Scots in learning about Glover and Scotland’s links with Japan, as well as inspire Japanese tourists to visit Scotland.

“We are very proud in the North-East of Scotland of our connections to Thomas Blake Glover”, said Aberdeen Lord Provost George Adam. “He came from humble beginnings and forged an amazing life and career in Japan”. 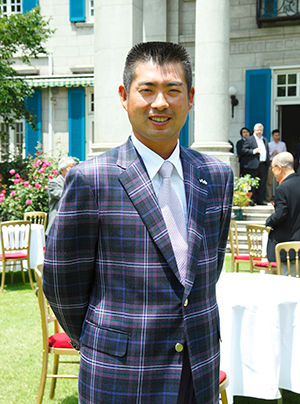 Keen to promote Scotland’s experience in successfully delivering major events such as the Glasgow 2014 Commonwealth Games and the Ryder Cup 2014, Hyslop attended private strategic meetings in Tokyo to discuss Japan’s upcoming sporting events. She said Edinburgh is looking for business and investment opportunities related to the Rugby World Cup 2019 and Tokyo 2020 Olympic and Paralympic Games.

Meanwhile, on 12–20 July, St Andrews, Fife, was host to The Open Championship 2015, where Yuta Ikeda, champion of the 2014 Japanese Open, played as Scotland’s first Goodwill Golf Ambassador. Ikeda accepted the appointment by Hyslop at a ceremony at the British Embassy Tokyo.

Sporting a jacket by Lochcarron of Scotland, a leading maker of wool tartans and tweeds, presented for him to wear during his visit, he said he was honoured to accept the position, describing Scotland as “the birthplace of golf”.

Katsuji Ebisawa, chairman of the Japan Golf Tour Organization (JGTO)—which Ikeda represents—said, “We at JGTO look forward to broader and deeper communication between Scotland and Japan through the game of golf”.