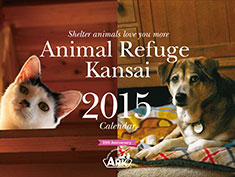 Photograph real animals, not postcard-perfect ones. That was the aim of Kyoko Harada, Animal Refuge Kansai (ARK) photographer when, eight years ago, she began taking snaps of dogs and cats rescued by the organisation.


A key way to show the recovery of the animals, images have always been an important part of ARK’s story. But the importance of the role they play looks set to increase, given the new partnership with car dealer Yanase & Co., Ltd.

During July and August this year, the Japanese firm hosted a special exhibition featuring Harada’s images of animals that the organisation has helped over the years.

A testament to the work of the volunteers and staff, the displays featured beautiful colour prints of the rescued dogs and cats, complete with the background recovery journey of each, and details of ARK’s wider work.

Held in Yanase’s Mercedes-Benz Setagaya Sakuragaoka branch in Tokyo, ARK expressed delight at the opportunity to promote their work in the showroom of a well-known firm that next year celebrates its centenary. Yanase also welcomed the collaboration, the first of its kind for the dealership.

“We wanted to do more than simply offer a collection box for charity”, Fukuo Tokuyama, branch manager, said. “We wanted to contribute to society and further a goal”.

According to Harada, in Japan, there is often a negative image associated with abandoned animals. Yet, through ARK, they can have a second chance in a new home with a new family. The photos celebrate this happy occasion, she explained.

“I didn’t want to take sad photos”, she said. “The animals have gone through difficult experiences but they are tough, and soon become full of vitality again. When I go to do a shoot, some animals even come right up to the camera, almost asking for me to take their picture”.

Harada hopes the pictures will go some way to encouraging people to reconsider their views on animal charities, which, in the past, perhaps have not had as high a profile as others.

Hiromi Iizuka, a spokesperson for Yanase, believes feedback from guests attending the special event shows this process of image realignment could already by underway.

“Many people commented that the animals seem cheerful, gentle and lively, and they were genuinely moved by that”, she said. “They also asked to see more photos”.

Having found the exhibition to be a big success, Yanase hosted another ARK photo exhibition in their Meguro showroom in October. A further display is scheduled to be held in Yanase’s Tokyo Shibaura showroom—where the main office is located—in December this year.