Simon Berry, the chairman of Britain’s oldest wine merchants, laughs at the first question I ask. As we sit down to our early morning breakfast meeting at The Peninsula Tokyo, I enquire what wine he would recommend pairing with the full English breakfast he has just ordered.

“Anything with eggs is difficult—besides you really ought to wait for elevenses, at least—or just get up a bit later. If you must drink with breakfast, Champagne is always a good choice”, he said, adding with his trademark dry humour, “You have to agree with Madame Bollinger who famously once said: ‘I drink it when I’m happy and when I’m sad. Sometimes I drink it when I’m alone. When I have company I consider it obligatory. I trifle with it if I’m not hungry and I drink it when I am. Otherwise I never touch it, unless I’m thirsty”.

Faced with leading a family-owned business dating back 310 years to when the Widow Bourne set up a coffee and tea-trading business on St James’s Street in London—a shop Berry Bros & Rudd (BBR) still occupy today—Berry says he turned to innovation and technology to lead the company into the future, a move that has led to phenomenal success over the past 20 years. “It is very simple, actually. The heritage side comes from time and you can’t escape it. The trick is to understand what is at the centre of all that. The first thing you learn is that you only last if you keep changing. But it is important to know what you are at your core”.

By the early 1990s, BBR’s traditional profile was as much an obstacle as it was an advantage in the wine business, with many people assuming they were old fashioned. “We had a shop front that, had it been able to talk, would have said ‘go away’”, he admitted. “It was intimidating, and if you were not wearing a pin stripe suit or couldn’t pronounce things, you thought you would be sent away. But that wasn’t what we were about. It was a dilemma, because we couldn’t change the shop—that wouldn’t be allowed because of conservation restrictions—but behind that we had fantastic staff precisely to help those who didn’t know anything about wine. You need to know your wine when shopping at a supermarket, but buying from us is all about getting expert help”.

Salvation came in the unlikely form of winning a bid to open a wine shop at London Heathrow airport. “I saw this as a chance to reinvent ourselves. We have always had a philosophy that the wine merchant should be the closest link between those who make wines and the people who drink them, so we realised it wasn’t important what we looked like at Heathrow but who we had working there”.

Berry laughs again as he recalls invaluable advice given by John Barron, their retail consultant on the day they were due to open. “He said he had one last bit of advice for us: ‘Everything I’ve taught you so far means nothing at all. You will only learn now from the people who walk through that door.’ And he was right. 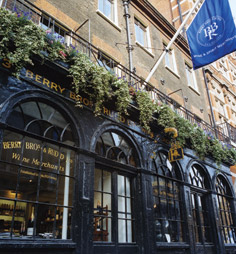 The family run firm for 310 years is embracing technology

“We thought we would sell to English businessmen travelling abroad but it was the opposite—most had never seen the shop in St James’s Street and we quickly discovered that the world was full of people fascinated by wine. Afterwards we went on to open in Hong Kong, Dublin and then, a bit later, in Tokyo. Our website also came out of this experience”.

BBR’s award-winning website is a treasure trove of useful information from its free app to “podcasks” and recipe matching. “We got into doing a website very early, around 1994”, says Berry. “We didn’t have a business plan, a budget or forecasts . . . but found it was the answer for people who were terrified of coming into the shop. In cyberspace, no one sees you blush. And so that is what it did for us”.

Berry says the website gave them a unique insight into how people bought online. “We also found that people only bought after the 7th time they had come to the website. So we decided to give them eight reasons to come back. We’ve drawn people in from different angles providing everyone from a novice to an expert with a reason to keep coming back. We’ve gone from an intimidating Georgian shopfront to a website with security but anonymity. If you can be intelligent about how you do it, you can reinvent yourself”.

But awards and accolades (the website is the second-most visited wine site in the world) are no reason to sit back and relax, observed Berry. “We have to continue to change and take into account that every culture has a different take on what we do—so we try to be as simple as possible and make sure that the people who want to have access to it, do. Some people take it all very seriously, but there is nothing worse than a wine bore. It is about fun—after all, it is only fermented grape juice”.

Other recent business endeavours include the Hong Kong collaboration with Dunhill’s flagship shop in the Princes’ Building, Central, which Berry describes as “a very good piece of shop design combining modern and traditional, so a perfect match,” and managing the Financial Times’ wine club. The latter has raised BBR’s profile, especially in other parts of the world, noted Berry. “We didn’t realise quite what an impact our advertising through them would have—it has had much more of an impact than we had expected”.

Despite these exciting modern developments, heritage remains at the core of the BBR’s business. “Our team is completely focused”, said Berry. “We encourage different ideas but we are very clear about the ones we do and don’t follow. For every one we do choose, we reject about 10. Some we choose are not always money generating, but we understand it is about supporting the rest of the business. This is the advantage of a family business; instead of thinking about profits next month you’re thinking about your children. It really is about a culture of passion.”