Head of the UK Diplomatic Service

Simon Fraser underlined the strategic importance of the political and economic relationship between the UK and Japan on a recent trip to Japan. Simon is the permanent under secretary and head of the Diplomatic Service, in other words, the senior foreign policy adviser to the foreign secretary, also responsible for managing the Foreign and Commonwealth Office in London, and British Embassies and High Commissions around the world.

Speaking ahead of his visit on 12-14 January, Simon said, “The UK is determined to deepen its relations with Japan. We share many values and work closely on the full range of international issues, including Afghanistan, Iran and nuclear non-proliferation. The trade and investment relationship between our countries is, of course, hugely important. The UK government is 100% committed to creating an open, welcoming environment for foreign investment, and Japan is a crucial partner in this. Japanese firms are vitally important to the UK’s economy and economic recovery, and we will welcome and support new investment alongside existing commitments”.

During his visit to Tokyo Simon met with a range of government officials, Japanese business organisations, British businesses and inward investors. At events organised by UK Trade & Investment (UKTI), he heard from representatives of the British and Japanese business worlds about the benefits and challenges they face. 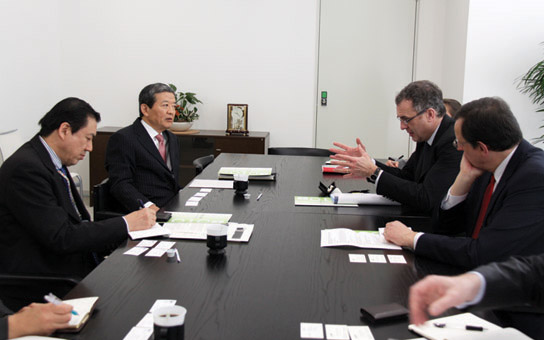 Simon reiterated the government’s commitment to helping British firms take advantage of opportunities worldwide. British firms told him that their top request of the UK government is that it create a positive environment for investment—including through infrastructure—so that it might benefit the economy, local firms and investors alike. He reassured them that this would be a central part of the government’s new UKTI Strategy and the Growth White Paper.

British firms also welcomed the Japanese government’s more proactive approach to consultation in developing their policies. Foreign firms in Japan seem delighted to provide the Japanese Ministry of Finance and the Ministry of Economy, Trade and Industry with evidence and ideas concerning tax arrangements for foreign investors. As a result, foreign investors and R&D investors are to receive tax breaks in the future, according to new legislation designed to boost the economy here.

Japanese firms welcomed the outcome of the recent consultation on visas for intra-company transferees and the government’s Patent Box initiative, which they believe will make the UK highly attractive for knowledge-intensive investment. Simon noted that, although the government can create the right climate for business, it is the private sector that creates wealth and jobs.

In his meetings with Japanese officials, Simon highlighted the importance of Japanese investment into the UK, given that some 1,200 Japanese firms employ about 100,000 British workers. He pointed out that there is immense potential for further strengthening the relationship. Increasing UK-Japan and EU-Japan trade would benefit all, he said, and creating an environment that would allow for negotiations on an EU-Japan Economic Integration Agreement is a high priority. An element of this is tackling non-tariff barriers to improve market access, particularly in relation to pharmaceuticals and medical devices. He also underlined the UK government’s support for BAE Systems’ role, as part of the Eurofighter consortium, in bidding to supply Japan’s future fighter aircraft.