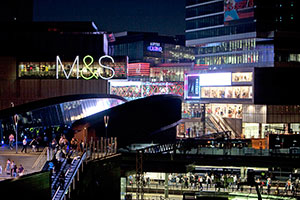 Taking on the world’s largest sporting events is a feat that has, traditionally, required significant development and adjustment for the host nation.

With Japan about to play host not only to the Tokyo 2020 Olympic and Paralympic Games, but also to the Rugby World Cup 2019 and the Kansai World Masters Games 2021, one of the crucial issues that needs to be tackled is providing venues for each.

On 27 July, Neil Levett, managing director of Alad Limited and publisher of the magazine Panstadia & Arena Management, spoke to members of the British Chamber of Commerce in Japan.

He outlined the models required in venue management and operation in Japan, and his plans to facilitate idea sharing through Stadia & Arena Pacific 2016, a sports venue conference and exhibition to be held in September in Yokohama.

Looking at venue owners and operators in Japan, Levett hopes to involve British firms in imparting service knowledge from both the Games and other successful sporting events that have taken place in the UK.

Japan context
“It may seem like a strange thing to say”, said Levett, “but we came here [to host Stadia & Arena Pacific] predominantly because Japan has got a basketball league, successful three-tier football league, and baseball league, some with 50,000-seater or over audiences. That gives us a sustainable business model after the party of the Olympics has gone”.

With the government placing an emphasis on the development of the national sports industry, the time is ripe to begin building Japan’s sports venue capability, according to Levett. He said that interest in global arenas expressed by representatives from some of Japan’s top venues is evidence that things are changing in Japan.

For Levett, the core issue is re-assessment of the financial models: the necessary shift from a cost centre to a profit centre.

“Venue owners in Japan tend to be prefectures and local and national governments, whereas in the Western model there are more that are privately owned”, he said. There needs to be a move from a prefecture-based funding model to a revenue-generating model he added.

Venues such as the O2 in London are run along the lines of a revenue-generating model. With this model, “the venue operator would come in on behalf of the owner, prefecture or government to run the facility”, he explained, adding that there is a requirement for “venue based revenue, where we are actually sweating an asset”.

He gave the example of the Singapore Sports Hub, a public–private partnership (PPP) model and a venue that hosts a 56,000-seat football stadium, 12,000-seat arena, shopping centre, aquatic centre and facilities for other sports.

“Content is king”, Levett said. “You can either have an anchor-tenant, such as a football club or basketball club, or a more transient venue … the Royal Albert Hall, with different performances and with a different finance model”.

Global talent
Levett hopes that inviting global stakeholders in the sports industry to share knowledge with Japanese delegates will lead to best-in-class management.

“It’s a real sharing exercise”, he said. He explained that UK Trade & Investment have organised “meet the buyer” sessions to match Japanese delegates with British firms in the hope of forming advantageous partnerships.

Levett selected West Ham United Football Club’s old stadium, The Boleyn Ground, as a prime example of the kind of transient venue model that Japan should look to adopt.

“It’s a typical model”, he said. “They have corporate hospitality; there’s restaurants, bars and meeting facilities”.

In addition, the stadium’s 80 corporate hospitality boxes, become hotel bedrooms on non-match days, he explained. This transforms the stadium into a meetings, incentives, conference and exhibitions venue.

Future-proofing global sporting event venues, to ensure that they do not simply become ghost remnants of a great event, was also on the agenda. This could be achieved through use of the smart venue concept, which is similar to West Ham’s hotel model, Levett explained. The concept looks at sport as a focus for community development.

He compared the concept to that of a European market square, with businesses surrounding the trading area. The Olympic Stadium is next to Westfield Stratford City, one of the biggest shopping centres in Europe.

“You’re going to go to that area and spend a day there”, Levett said, pointing out the value of the location. For this idea to work in Japan, there is a need to switch to a PPP model, which has been successful in the Yokohama arena, he added.

Regional views
Japan’s population is heavily concentrated in the cities of Tokyo, Osaka and Yokohama, but the government wants to maintain its regional and local population level. It then “needs to make sure that people out in the regions have got work”, Levett said.

One way of doing that is to look at the role facilities play in communities in these regions. Levett said that the Japan Sports Agency (JSA) is looking at models, such as that of Madison Square Garden in New York City.

By doing this, said Levett, the JSA can understand “what they can do to replicate or better it”. In addition, “the UK has signed a memorandum of understanding with Japan to share best practice on the provision of security at major sporting events”, he said.

Get involved
Bringing together over 50 global industry experts and delegates, Stadia & Arena Pacific 2016 will explore topics such as the design and construction of sports venues, operations, technology and security.

Tours of the Yokohama Arena, Nissan Stadium and Yokohama International Swimming Pool are also in the programme. The exhibition will offer delegates the opportunity to meet leading product and service suppliers.

“The thirst for knowledge certainly exists”, Levett concluded. “There is the embryo of this happening in Japan; knowledge-sharing is coming through”.