The unwavering love of British apparel among Japanese consumers has boosted the confidence of two up-and-coming global designers with an eye on the market. And, with their potential recognised in the form of awards presented at Fashion Week Tokyo in October, their hope for success would seem not unfounded.

Making his debut at the capital’s top fashion event was Henry Holland. Creator of House of Holland, the London-based designer fought off competition from applicants in 36 countries to win the DHL Exported Award, thereby enabling him to showcase his collection.

As part of the initiative, aimed to help designers—who are expected to flourish globally—to expand across international borders, Holland will return to Tokyo next month for a second show. 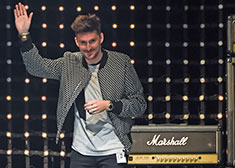 Henry Holland greeted guests at the end of his runway show.

Talented hopeful
Chosen by a committee of experts as the designer who would benefit most from the programme, Holland is firmly established in his home market.

After entering the UK limelight in 2006 with a line of ’80s-inspired, irreverent T-shirts, the Briton showed his collection for the first time in London Fashion Week just two years later. His brand, House of Holland, is now marking its 13th successful season.

“We are hopeful that the support we provide these ambitious and talented young designers to expand their business into Japan through the DHL Exported programme will lead to increased choices for fashion consumption in Japan”, said Taketo Yamakawa, president and representative director of award organiser DHL Japan.

Although, as part of the global programme, showcase options include the Fashion Weeks of New York, Milan and London, Holland said Tokyo was the natural choice.

“Tokyo really feels like the most relevant for me and my company, for our evolution and our growth”, he told BCCJ ACUMEN.

“We want to focus on Japan and bring our business here in line with the rest of our business in the Asia–Pacific region. Aesthetically, Japan suits our look quite well, and we have some good stockists here, but I think there is a lot more penetration in the market that we can achieve here”, he added.

As winners of the award, the firm will now receive help from DHL, in collaboration with IMG Fashion, to do just that.

While support is to cover the fields of logistics, marketing, digital and social platform development, as well as e-commerce, Holland believes a key benefit is the opportunity to do two runway shows in consecutive seasons.

“I think we have a lot of work to do between now and March to try and grow our business here”, Holland said in October. “But that is the beauty of doing it twice: we get to come and meet the people. We do it once, get things in motion, and then have the next six months to try and cement it”. 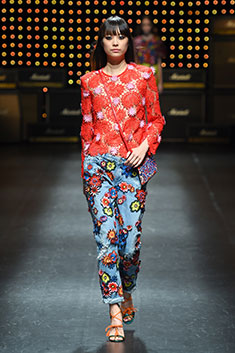 Bright colours and florals are key in Holland’s 70s-inspired designs.

Tokyo muse
After his “really fun, calm and enjoyable experience” of doing a show at Fashion Week Tokyo, compared with the experience at its London counterpart, the designer is keen to incorporate the country in his work.

Speaking of his love for Tokyo, Holland said that, aside from plans to organise a photo shoot here for his new collection, he will be coming back for research.

“Japan has always been about street fashion: the Japanese coined the term”, he said. “I think Japan—and Tokyo—is a really fascinating place for that. There are lots of trends that come from the street and different areas of the city”.

Perhaps not surprisingly then, inspiration for the 31-year-old’s latest collection came after he had been watching a documentary about groupies in the 1970s. He loved the fashion choices of the girls, who followed rock stars from gig to gig.

With them as his muse, Holland updated the clothes’ shapes and silhouettes to create pieces that were modern and floral, designed with a savvy London-girl aesthetic in mind. The result: a vibrant, ’70s-inspired collection, dominated by bold prints and glaring colours.

Cater to market
Yet, conscious of the need to localise his brand for success, Holland enlisted a local stylist to adapt his collection for the Japanese market.

Speaking of his Tokyo show, Holland said “we got rid of some of the longer-line pieces and we went for more of the shorter pieces; we added a bit more colour and removed some of the print.

“We added some accessories that we thought were more key to the market”, he added, emphasising that the overall look was unchanged. “There were subtle changes, very minimal, and we stayed very true to the aestheticism of the show”.

Given the demand for, and appreciation of, British fashion in the Japanese market, it could be said the Greater Manchester-born designer has an advantage in maintaining and promoting his British style.

According to UK Trade & Investment, Japan is the largest market for UK fashion outside the EU and the United States. With “Made in the UK” considered by many as a sign of authenticity, British fashion is highly regarded and admired among Japanese consumers.

“They are keen in the story behind the brands, and respect those hidden parts of the brands a lot”, Miyazawa explained. “They buy fashion not only because of prices, designs or brand names but because of the brand’s ethos or beliefs. And, it is British fashion that can offer those authentic values”.

Holland agrees: “I definitely think there is an appetite for UK fashion in Japan”, he said. “Anything British—tartan, heritage fabric, tweed—has always resonated with the Japanese market”.

Collab attracts attention
Fashion designers Steven Hall and Yurika Ohara have experienced this first-hand. In fact, it was the Japanese appreciation for UK designs that brought the husband-and-wife team to Tokyo, where they set up their business.

Graduates of Central Saint Martins of the University of the Arts London, London-born Hall and his Japanese wife began their career making T-shirts. At first, they sold them solely to boutiques in the capital, but then their design caught the eye of Japanese buyers.

“I think there is something slightly English but also something very Japanese about our style”, Hall told BCCJ ACUMEN.

“Then I went to Tokyo to visit and I really liked the fashion. That’s why we ended up here”, he explained.

From those humble beginnings, the duo established In-Process by Hall Ohara in 2006. That same year the brand made a splash at London Fashion Week, where Hall and Ohara won the New Generation Award for new designers. They have continued to flourish since the brand began showing at Fashion Week Tokyo in 2010–11. 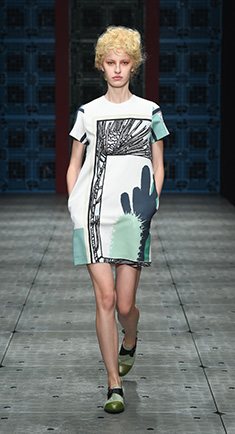 Like Holland, In-Process had its international potential recognised at the capital’s high profile event in October, with their receipt of the 7th DHL Designer Award.

Selected by DHL and the Japan Fashion Week Organization from 48 brand collections presented at the show, the judging panel said the Anglo-Japanese team had “original ideas characterised by modern nostalgia”.

Reflecting Hall and Ohara’s love of Mexico, the runway show drew on inspiration from tiles, architecture and other cultural pieces from the country, while maintaining their overall design approach “to capture the aura of a garment that is in the process of being made”.

Created to support young, up-and-coming fashion designers to expand overseas, the award includes overseas shipping credit from DHL valued at ¥500,000, which will support the couple’s aim to further develop their brand.

Perhaps what Hall describes as the “natural mix of British and Japanese fashion” in his brand is symbolic of the wider interest and collaboration in fashion between the two countries.

“There are a few shops in London that are very interested in Japanese style, and you have really cool [Japanese] brands that may feed off the English side as well. In terms of style, sometimes Japanese fashion is inspired by London, and England in general”, he said.