Another old Tokyo hand has joined that great British expat community in the sky. Doreen Simmons passed away on April 23, aged 85. I used to bump into her at Japan-British Society events and Irish pubs in Tokyo, and she was always friendly and funny.

Born in Nottingham, East Midlands, she read theology and classics at Girton College, Cambridge, when opportunities for women in higher education were very limited.

After living in Singapore, she returned to the UK to teach before moving to Japan in 1973.

Her July 2012 BCCJ ACUMEN interview says: “As well as NHK and her main job at the Foreign Press Center, Simmons also works at the House of Councillors and the House of Representatives, as well as the National Diet Library, checking English-language materials and occasionally helping negotiations with overseas entities”.

NHK had recruited her as a pundit in 1992 to bring “colour and character”—and her self-taught specialism—to its new English-language sumo service.

She soon became a cult-like figure for foreign fans, and a heavyweight fixer for visiting journalists when gambling, bullying and corruption scandals rocked the tight world of sumo.

Who could forget her classic BBC interview in 2011 when she spoke of “scuffles and grunts” from the sumo stable opposite her home as she took out the rubbish? Despite the ban on females in stables, except wrestlers’ wives or daughters, Doreen was a regular at her local dohyo in Ryogoku, sumo’s spiritual heartland. One can only imagine her reaction in early April after nurses trying to save a man’s life were ejected from a dohyo in Kyoto because women were considered “impure”. 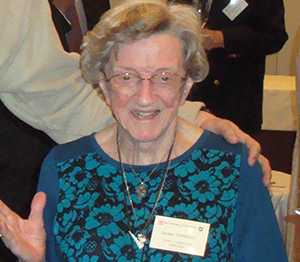 A Mensa member, Simmons was also a Mastermind contestant, bungee jumper at age 68, Irish and African drummer, audiobook voice of Miss Marple, tattooed volunteer, and lone traveller to remote places such as Mongolia several times with Habitat for Humanity.

She regularly worshipped at St Alban’s Anglican-Episcopal Church in Shibakoen, Tokyo, performed with the Tokyo International Players and sang in the British Embassy Choir.

Phil Robertson told me that she was very sociable and rarely missed gatherings of the Cambridge & Oxford Society or Brits at Lunch where her erudition, kindness and wicked humour won her many friends and admirers.

In November 2017, the government awarded her the Order of the Rising Sun, one of Japan’s highest honours. Doreen will be sorely missed.

More awards
Doreen would have been delighted at six more Britons being gonged by Japan one week after her demise. Recipients earned an Order of the Rising Sun for their priceless work as diplomats, writers, artists and academics.