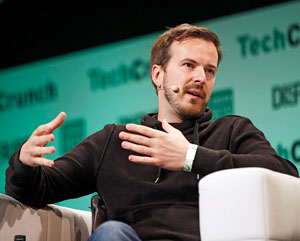 Taavet Hinrikus has spoken at prestigious industry events such as TechCrunch Disrupt.

Most of us have to work pretty hard for our cash. Which makes it all the more galling when banks or other financial institutions charge us so much for even the most minor of transactions, such as moving money to an account overseas.

Living in London a decade ago and getting paid in euros, Estonia-born Taavet Hinrikus felt the pain every time his pay cheque arrived with significant deductions. So he set out to solve the problem, for himself and the millions of other people who regularly need to send cash across borders.

“I started work with Skype and moved to London in 2002, and every month I would go to my bank and tell them that I wanted to transfer €1,000 from my account in Estonia, where I was paid, to London”, 35-year-old Hinrikus told a British Chamber of Commerce in Japan luncheon at the Shangri-La Hotel Tokyo on 8 September.

That straightforward transfer cost him €20 each time. But there were other catches, he quickly realised.

“It was also taking three or four days to arrive, and I thought to myself, ‘Are we really living in the 21st century?’”

Even more frustrating, he said, was the banks’ application of a “hidden margin” that meant the €20 fee actually came to €50. In their defence, however, such fees cover, at least in part, risks associated with foreign currency transactions, as well as regulatory costs.

Keeping it local
A chance conversation with Kristo Käärmann, another Estonian expat in London, revealed that he was experiencing the same problem in reverse. Käärmann was being paid in pounds, wanted regularly to send funds back to Estonia, but felt he was being ripped off.

The solution they devised was to avoid costly international transactions. Käärmann simply transferred pounds from his UK bank account to that of Hinrikus, while Hinrikus checked the day’s mid-market exchange rate—the rate that banks use when trading currencies with each other—and move the equivalent amount from his Estonian account to that of Käärmann.

“Local transfers are free and fast and we saved a lot of money on the exchange rate”, he said.

The next realisation was that tens of thousands of people in London alone—where nearly four in every 10 people are foreign-born—would almost certainly wish to send funds abroad at some point.

“It quickly became a question of what we could do to make the life of the consumer easier; we knew the problem and just needed to find a way to solve it”, Hinrikus said.

In 2011, Hinrikus and Käärmann created TransferWise, which is based on their simple original currency swap, although not all transactions are the result of matches between two consumers with contrasting currency needs. When there are no matches, the firm uses its own money to complete the deal.

Still, the premise was so promising that one of the initial investors was Sir Richard Branson, and the firm has gone on to achieve so-called “unicorn” status—a valuation of more than $1bn. Today, the firm claims more than 600,000 people transfer some £800mn every month. And in the year to 31 March, revenue hit £28mn, an increase of 187% year on year. 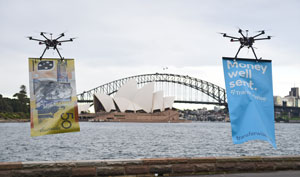 The firm has expanded internationally into countries such as Australia.

The service uses more than 645 routes and operates in 38 currencies, delivering funds to about 90% of the world’s bank accounts. Money can be sent from 36 countries to 55 recipient countries. The US and Australia joined the network in 2015.

The latest additions—this year—to the firm’s network are Canada, Brazil and Japan.

“We started by solving our own problem and focused on sending money between London and Estonia, but we started our global expansion two years ago”, Hinrikus said.

“Japan is one of the largest economies in the world, with 1.3mn Japanese living abroad and 2.2mn expats here in Japan”, he said. “And banks here are under-developed, under-delivering and over-charging”.

On top of that, Japan is internationalising rapidly and is the fastest-growing tourist destination in Asia. It expects 40mn visitors in 2020, the year Tokyo will host the Olympic and Paralympic Games.

TransferWise charges ¥500 for a transfer of up to ¥50,000 and 1% of the total amount being transferred for transactions above that figure. In comparison, Sumitomo Mitsui Banking charges a flat ¥4,000 fee per transaction as well as ¥2,500 to the recipient bank. Banks also make a commission on advertised exchange rates, with Sumitomo Mitsui, for example, placing a ¥1 surcharge on its daily exchange rate, which costs a customer ¥1 for every dollar that is sent. That figure can be discounted, however, for large sums or corporate customers.

Still, Hinrikus points out that TransferWise charges no commissions on exchange rates and underlines the fact that the cost is merely 1% of the total amount being transferred.

New territory
The firm has a three-strong team in Japan at the moment, but intends to ramp that up to 10 staff in 2017.

“Every country that we expand into, we have to tackle the local regulations and find a banking partner”, Hinrikus said. “The Financial Services Agency here has been relatively straightforward for us because the government is putting a lot of emphasis on fintech now.

“We knew that it was going to be hard and take time to get it right in this new market—but the more interesting [part] is … marketing and getting people to trust a new company, convincing people”. 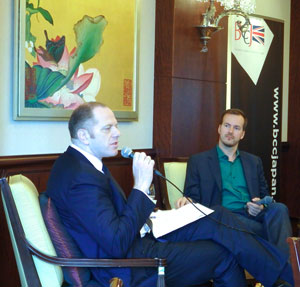 And while an aggressive advertising campaign on the London Underground—images of customers sobbing as they emerged from their bank—convinced British people to try out the fledgling firm, Hinrikus believes that viral growth through word-of-mouth recommendations “by people who have been pleasantly surprised with the service” is the best approach for the Japanese market.

TransferWise currently has an 8% share of the British market—impressive for a firm that is only five years old, but a figure that Hinrikus says “is only the beginning”. In Japan, he has set a target of 5% of the market within three years.

“That is pretty ambitious”, he conceded. “But if you look at our growth in the UK and, more recently, Australia, then I believe it should be achievable”.

And in the same way as Skype has revolutionised the way in which we communicate internationally—largely free of charge—Hinrikus believes that TransferWise will have the same impact on the way we bank across borders.

“If we look at the banking industry, we have not seen a lot of innovation since, perhaps, the introduction of ATMs—and that was about 50 years ago”, he said. “That means there is a lot that can be done to make retail banking more focused on consumers”.

And as more fintech firms encroach on banks’ traditional territories, those banks “have to go through the hard process of reinventing themselves and becoming as nimble as the technology companies that they are now competing with”, Hinrikus said.