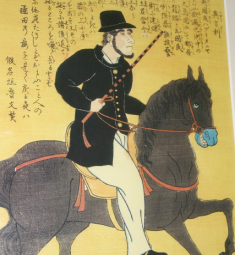 A traditional Japanese woodblock print depicting Charles Richardson, who was killed by samurai in the clash.

This year marks the 150th anniversary of the Namamugi Incident, the conflict in which samurai killed a British trader, resulting in feudal Japan being brought into the modern era.

To commemorate the event, which occurred on 21 August, Takeo Asaumi gave his 248th public lecture on the episode that is considered a turning point in Japanese history. However, the episode remains little known in the UK.

“Before this happened, Japan was an almost completely closed country, shut off from the rest of the world”, said 82-year-old Asaumi. “But the repercussions of this incident demonstrated to the leaders of Japan that it had to open up to outside influences, to develop foreign trade and relationships with other countries.

“That is why it is so important to our history”, he added.

Asaumi, a retired businessman, believes the death of Charles Richardson on 21 August, 1862 is so pivotal to Japan’s emergence that he has spent 36 years and his own savings on building the Namamugi Incident Museum in Yokohama’s Tsurumi Ward.

He also renovated the graves of the two other Britons who were seriously wounded by samurai of the Satsuma clan.

Named after a small coastal village south of Tokyo that today is a suburb of Yokohama, the clash of cultures arose when four Britons on a sightseeing trip to a temple refused to dismount from their horses when they encountered the 400-strong entourage of Shimazu Hisamitsu, the regent and father of the clan head.

The terms of the 1854 Anglo-Japanese Friendship Treaty exempted Britons from the obligation to demonstrate the deep respect shown to leaders by the average Japanese person. However, the agreement meant little to the samurai’s bodyguards.

As the four Britons neared the covered litter at the centre of the procession, one of the clan’s escorts slashed at 28-year-old Richardson and his companions. The Yokohama-based merchants, Woodthorpe Clark and William Marshall, as well as Margaret Borradaile, fled on horseback, but were pursued by the samurai.

A simple plaque marks the spot where the clash occurred— today a suburban street of houses and shops. There is a larger, road-side stone monument some 640m away, where the mortally wounded Richardson finally fell from his horse.

“He had 10 deep cuts from swords to his body but was still alive on the road when the samurai who had been chasing him arrived”, said Asaumi. “It was clear that he could not survive, so Kaieda Takeji killed him with a single sword thrust to the throat”.

When word of Richardson’s death reached London, the government demanded compensation of £75,000 (today equivalent to £48mn) from the Japanese government, and a further £25,000 from the Satsuma clan. The UK government also ordered the trial and execution of the perpetrators.

The clan declined London’s demands so, in August 1863, a seven-strong fleet of Royal Navy warships approached the Satsuma stronghold of Kagoshima in Japan’s southern island of Kyushu. Fired on by shore batteries, the British replied with a bombardment that destroyed three steamships, five junks and approximately 500 wooden buildings in the city. Casualties were light on both sides, and Satsuma’s representatives later agreed to pay the reparations that London was demanding.

Ironically, the Satsuma convinced the Japanese government to lend the clan £25,000 of the compensation, and subsequently refused to repay the debt.

Satsuma cannonballs performed poorly against those of the British navy, which were designed to explode after travelling over two miles. The clan was thus convinced that they needed to forge alliances with powerful nations.

Within five years, the shogun’s government was replaced, and the Meiji era established (1868–1912). In the rush to modernise, fundamental changes were introduced in Japan’s social structure, internal politics, military, economy and international relations.

Asaumi’s museum receives approximately 300 visitors each month. Copies of The Illustrated London News, the world’s first illustrated weekly newspaper, can be found at the museum and details the killing of Richardson as well as the aftermath.

The amateur historian also paid to renovate the graves of Clark and Marshall, and to move them to a new site alongside Richardson’s grave at the Yokohama Foreign General Cemetery.

“Their graves were not being cared for and, as they are all still in Japan, I thought it would be nice if they could all sleep alongside each other”, he concluded.