From nori to sake, wasabi and the freshest fish, enterprising Britons are turning their hands to producing foodstuffs that are more the traditional staples of a Japanese kitchen.

And while these entrepreneurs the length and breadth of the country are tapping into the growing appreciation in the UK for Japanese cuisine, they are also producing such high-quality products that their firms are either already exporting to Japan or are on the cusp of a breakthrough. 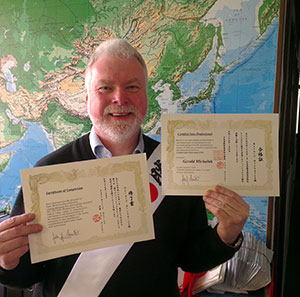 Gerald Michaluk of The Isle of Arran Brewery is certified in sake production.

In January, the owners of The Isle of Arran Brewery purchased a site in Dreghorn, North Ayrshire, which is to be turned into Scotland’s first sake brewery.

The site of a former primary school, the repurposed facility will include a beer hall, a brewing school, a bottling plant and a research and cultural centre devoted to spreading the word about Japan’s most famous beverage as well as its art and culture. The firm behind the project expects to attract 30,000 visitors a year.

“The whole idea was a result of a conversation in a local public house on Arran, The Ormidale, when we noticed that Japanese whisky was on sale even on Arran”, said Gerald Michaluk, managing director of the brewery. “And we wondered if a Scottish sake was on sale in Japan, would a bar there be as equally well stocked [with the drink].

“We contacted our Japanese wholesaler, who said it would and the idea took flight”, he told BCCJ ACUMEN. “I then went on a course to learn about sake production in Japan and, after a few years of trials, we are ready to start serious production”.

The beer side of the operation produces 12 different styles of beer, ranging from Indian dark brews to its best-selling Arran Blonde and exports to Japan, Spain and France, with US operations in the pipeline. It has high hopes for its sake, too.

“There is increasing interest in sake, mainly in London. And this, along with Japanese-style restaurants, make up our UK target market”, he said. Unfortunately, one obstacle may be the relatively cheap—and often considered inferior quality—sake that is already being imported from the US.

To show the Americans how it should be done, the Arran Brewery intends to export premium quality sake to both the US and Japan.

“We have had several visits from other sake makers in Japan and Norway and they have all complemented us on our approach”, Michaluk said. 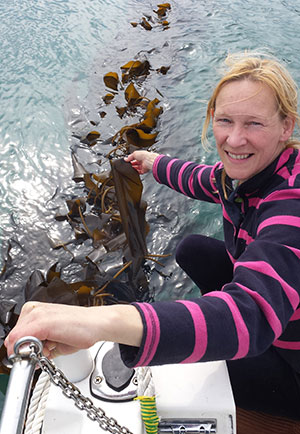 Alongside sake, there is little that is so quintessentially Japanese as nori. The only producer of ready-to-use kelp products in Europe is based on another British isle, Rathlin Island, County Antrim.

“We set up the company in February 2013 and secured the full licence for the kelp farm in July 2014”, said Kate Burns, managing director of Ocean Veg Ireland Ltd.

“This year is our first proper harvest, but it has taken us two years to work out the best way to process kelp as a ready-to-use freshly frozen ingredient, and we have had to commission the building of specialist equipment to process it”, Burns said. “The toughest part of the production process is the manual handling, between harvesting and being prepped for cutting into products.

“The kelp which grows round Rathlin is special”, she said. Testing has demonstrated that there is no heavy metal pollution of the products, the rope-grown kelp is biofoul free, and microbial analysis has also shown the product to be pollution-free.

“As this is only our first full year of production, we are not sure what our harvest will be on our 18 ropes, of which seven are wild seeded”, Burns said. “But last year we had four tonnes on three ropes, which were all wild seeded”.

Most of the crop was sold for dashi production to a large soup stock manufacturer in Ireland, for both the Irish and UK markets. The firm, which is also selling some processed product in Scotland and England, has orders from Switzerland and is currently negotiating with a potential large buyer from China.

Burns had initially hoped to supply kelp to Japan in the aftermath of the disaster at the Fukushima Daiichi Nuclear Power Plant in 2011, when sale of local stock was limited due to the public’s fears of radioactivity. However, opening the door to the market has been more difficult than she had imagined.

“We are not currently selling to Japan, which has seen quite a reduction in demand for sea vegetables over the past few years”, she said. “While we think there may be a market there for quality products, we have not been able to secure a buyer.

“We understand that the decline in Japanese seaweed consumption is probably a mixture of change in eating habits to a more Western diet, unfortunately, and also some concerns about pollution in the Japanese product”.

Burns has not given up on Japan entirely, but the firm is focusing its efforts on the market for raw laminaria, a species of kelp, for production of foods with umami flavour in Europe. She particularly hopes to take advantage of a boom in new, innovative and healthy foods.

Remarkably, it appears that Japan’s domestic nori industry has a Briton to thank for its very survival. In 1948, a series of typhoons combined with high levels of pollution in coastal waters had caused the collapse of the local nori industry. With little scientific knowledge of a crop that had become a staple part of the diet, the outlook was bleak until Dr Kathleen Drew-Baker stepped in.

A scientist based in Manchester, in 1949 Drew-Baker published a paper in the international weekly journal of science, Nature. She outlined her discovery that a tiny algae known as conchocelis was actually a young nori, rather than an entirely different species. After reading her research, Japanese scientists were able to devise ways to artificially seed the tiny spores onto strings and rebuild the nori industry.

Drew-Baker is revered in Japan’s nori-growing communities as “Mother of the Sea” and Osaka hosts a festival in her honour each April. 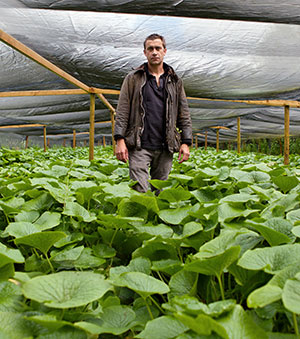 Jon Old, project manager of The Wasabi Company, with his wasabi crop

One British firm that is enjoying a degree of success in Japan is Shetland Catch Ltd., which processes mackerel, herring, horse mackerel and blue whiting for export all over the world.

“We have sold varying amounts to Japan since we started in 1989”, said John Angus, sales director for the Lerwick-based business. “We sell to Japanese importers who arrange for reprocessing to be carried out, usually in China, before selling to Japanese retailers”.

While the Norwegian industry has benefited from the support of a well-funded national marketing campaign for many years, UK organisations such as the Sea Fish Industry Authority and Scottish Development International are starting coordinated promotions of Scottish seafood in the Far East, Angus said.

“Our mackerel is caught in the same fishing area by the same vessels that land in Norway, so there’s no quality difference, but ‘Norwegian origin’ still commands the best price and the highest profile in Japan”, he added. “We hope that in five years our product will have price parity with Norwegian mackerel in Japanese supermarkets”.

There are compelling precedents for British firms making inroads into a market that can, on occasion, be very protective of its culinary heritage.

Take, for example, The Wasabi Company, which was set up in Dorset in 2010 and featured in the January 2013 issue of BCCJ ACUMEN.

“We have just held our second farm invitation day for chefs and the press and it was very well attended”, said Jon Old, project manager for the company. “It helped that we were on the BBC and The Mail on Sunday have done a piece on us, and sales are so good now that we’re not taking any new customers simply because we don’t have enough wasabi to go around right now”.

The firm sells directly to chefs in the UK, and through a distribution company to supermarkets and specialist stores. It also provides wasabi throughout Europe.

“We have also had interest from Japan, which is pleasing because we met a lot of resistance from wasabi growers and Japanese chefs when we first started”, Old said. “One of the restaurants we visited at the very beginning—that I can only describe as being hostile to our approach—sent representatives to the recent open day and they were very complementary.

“That resistance has melted away and we’re finding that Japanese wasabi farmers are coming to us and inviting us to visit them in Japan”, he added.

A Japanese trading firm that dispatched sales representatives to Dorset to sample the company’s products concluded that it is growing the crop in the most authentic way anywhere outside of Japan.