As a teenager, Jane Best MBE says she was “terribly shy”. That is a little hard to understand, given her position today. As president and CEO of Refugees International Japan (RIJ), she is constantly required to meet people in remote—and sometimes dangerous—parts of the developing world, and to be equally at ease in settings with high-flying businesspeople, diplomats and other officials who support the organisation.

Best, aged 58, says any lingering shyness was banished by a combination of college and three years in the mid-1970s driving a battered Datsun through the Zambian bush to promote community programmes with the VSO, a charity that sends volunteers to poor countries. It also instilled a love of learning about countries and cultures that explains how, in the early 1980s, she arrived in Tokyo where she went on to open perhaps Tokyo’s most well known English restaurant. 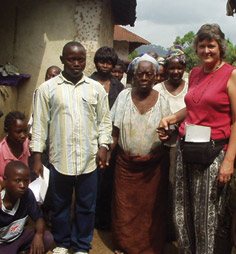 “I discovered I had something to say when I was in college, where I became student president, and plenty of people say I haven’t stopped saying it ever since”, she said.

Following a frustrating year working in an accountant’s office after completing her studies in Institutional Management at Llandaff College of Education, now part of the University of South Wales, she went to Zambia to teach in a school for budding hotel staff. The experience changed her life, she said, and laid the foundations of her charity work.

“I was fortunate in that I was allowed to pursue other undertakings aside from the teaching and, with the students, we set up projects to study school meals and catering in hospitals”, she said. “I had to learn how to fix the car when it kept breaking down in the bush and I’m certain some of the people I met were in the African National Congress (then banned by South Africa), as Zambia was a hotbed for the organisation at that time”.

After five years back in Britain, Best says she was itching to go overseas again and, through a friend, found work teaching in Japan in the early 1980s. Initially, the plan had been to just visit Japan before spending more time in South-East Asia. “I’m drawn to developing countries”, she said. “There’s something about the chaos there that appeals to me”. But Japan became more of a permanent base in 1988 when she opened the restaurant 1066 with her husband Steve, in Naka-Meguro.

“We met some amazing people through 1066 and in the first year we had a phone call, out of the blue, from the Tokyo Dome asking if we could make Shepherd’s Pie”, she recalled. “We said we could and they ordered enough for 80 people and asked us to cater for The Rolling Stones on one evening of their Steel Wheels tour”.

Keith Richards’ favourite dish, apparently, was Shepherd’s Pie and he once refused to go on stage until his needs had been met. Back stage with the Stones, Best says Richards hardly ate as he was too busy playing pool, although Charlie Watts was more chatty. Mick Jaggers’ London accent preceded him and, for a performer with such a huge stage presence, she thought he was less imposing offstage.

The restaurant also catered to Eric Clapton when he performed in Tokyo, as well as serving up fine English fare at British Embassy Tokyo events. The restaurant became a venue for a number of charity fundraising events, to which Best was able to devote herself more fully after taking the decision to close the restaurant in 2000.

The role of funding director of Refugees International Japan is ideal, Best says, as it enables her to monitor where funds are going and to verify they are being used in the most appropriate and effective way. She took on the role in 2000 in a voluntary capacity and became president and CEO on a full-time contract in 2006. About twice a year, she travels to projects to see the progress that is being made. 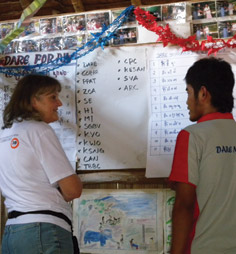 Set up in 1979 in response to a surge in the number of people fleeing conflicts around the world—not least in Vietnam, Cambodia and Laos—the not-for-profit organisation set itself the target of raising funds to assist those who had lost their homes and livelihoods. Based in offices provided by Showa Shell in Odaiba, the charity is virtually completely staffed by volunteers and has a network of about 100 people who help out.

RIJ is currently preparing for its annual charity auction—A Bid For Hope—that is one of the biggest fundraising events on its calendar. It will be held at the Ritz-Carlton hotel.

Sony Corporation, for example, donated tickets to the 2010 FIFA World Cup South Africa that included accommodation; another generous donor laid on a private jet to take eight people to the Park Hyatt Hotel in Shanghai—for which trip the winning bid was ¥6 million.
The funds raised are provided to organisations operating projects in some of the most troubled parts of the world.

“Our aim is to build the capacity of these communities that have been displaced by conflict, where the people have lost their confidence and their dignity”, said Best. “Water and food are obviously essential in these situations, but if you ask a refugee what is most important to them, they will say they want their dignity again”.

The funds go to projects such as the successful drug and alcohol rehabilitation programme set up by a Canadian woman and run by the refugee community in camps on the Thai-Burma border, where nearly all the residents are refugees from the regime in Burma. The scheme has an impressive 65% success rate and there has been an associated programme for teenagers, who are encouraged to get involved in sporting events, as well as dance and music performances using traditional instruments.

And Best—appointed MBE at Buckingham Palace by the Queen in 2002 for improving bicultural relations—is proud that 85% of the money pledged to the RIJ goes to those who need it the most.