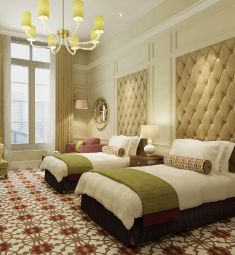 A British architectural firm played a key role in the interior renovation of one of Tokyo’s most important and historical landmarks.

Work to restore The Tokyo Station Hotel got under way in 2006, and the iconic building reopened to guests on 3 October.

With a total floor space of more than 20,000m2, 150 rooms, three banquet halls, a fitness club and spa, a lounge, bars and restaurants, the hotel—which first opened in 1915—aims to provide a blend of the historic with modern Japanese hospitality.

Managed by Nippon Hotel Co., Ltd., a JR East firm, the task for London-based Richmond International was to create a hotel that incorporates not only the stately dignity of a building that is officially designated an Important Cultural Property, but also the functionality that is expected of a contemporary hotel. 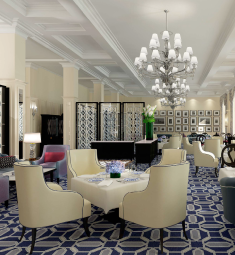 “We invested time and thought into researching the history of the building and Japanese culture, in order to discover the essence of Japan and create calming interiors with flavours of Japanese tradition.

“We wanted to create an environment that embraces the heritage of the building and the period of such a prestigious station hotel, while providing the comfort and services demanded by the 21st century guest”, she added.

The main station building has undergone extensive restoration of the designs created by renowned Japanese architect Kingo Tatsuno (1854–1919). The undertaking has included work on the third floor of the building, as well as on both the north and south domes, that has both preserved and utilised the existing structures.

Relief decorations that were added include numerous Japanese-style motifs, including eight of the 12 creatures of the animal zodiac on the walls of the domes, flower decorations and eagle reliefs in the eight corners of the ceilings of the domes, each with a wingspan of more than 2m. 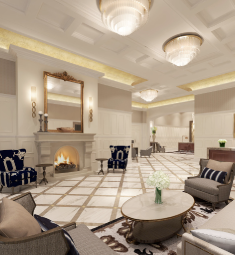 Roof slates on the two domes are Japanese and were selected because identical slates had withstood the worst effects of the tsunami triggered by last year’s Great East Japan Earthquake.

Richmond International has 40 architects and has previously worked on the interior of the Sendai Palace Hotel. The firm has carried out projects all over the world, ranging from the Boca Beach Club in Florida to The Langham Hotel in London and The Trianon Palace and Spa in Versailles, thereby having built up a strong reputation in the industry.

“We set the benchmark for international hospitality design more than 40 years ago and we have been at the forefront ever since”, said Rawlinson. “We believe intelligent design can bring life to each and every individual space, allowing global brands to deliver outstanding, world-class experiences. We are cultured in the art of ‘designing hospitality’”.

Hitoshi Fujisaki, general manager of the hotel, is looking forward to the opening of the newest addition to Tokyo’s luxury-end hotels, said: “We are extremely fortunate to have a heritage hotel that is strategically positioned at the heart of Tokyo’s central business district.

“With the support of Richmond and our partners, we aim to continue its proud 100-year legacy of providing an authentic hotel experience that both our local and foreign guests will talk about for the next 100 years”.

The spacious lobby incorporates marble flooring and a fireplace, while the high ceilings and large, vertical windows are designed to enable travellers to forget the hustle and bustle of neighbouring Tokyo Station.

The completion of restoration work and the opening of the hotel was marked with a night-time illumination of the entire structure. The updated station facilities include a new travel service centre for JR East and a new gallery, spread out over 2,900m2.