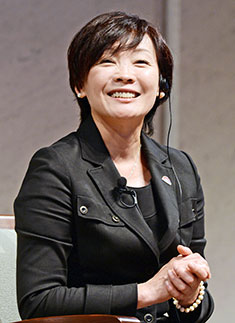 Akie Abe shared her views on growing up in Japan as a woman.

Diversity, inclusion and female empowerment. These are the new buzzwords infiltrating Japan’s ultra-conservative business culture, the cardinal virtues of which long have been the very opposite: assimilation, conformity and deference to a patriarchal hierarchy.


Yet, the leader intoning this radical mantra is none other than Shinzo Abe, Japan’s conservative prime minister.

Abe’s conversion to the cause of womenomics—or how to halt economic free fall by letting the other half of the population into the male-only employment club—came in January at the World Economic Forum in Davos, Switzerland.

Here, he announced a target of “30% female representation in leadership positions across Japanese society by 2020”. A tall order, considering only about 9% of current senior managers in Japan are women, compared with a global average of 24%.

Following up on his Davos debut, Abe spoke at the World Assembly for Women (WAW) in Tokyo on 12–14 September, an event hosted by the government of Japan, Keidanren (the Japan Business Federation), Nikkei Inc, and the Japan Institute of International Affairs.

Running concurrently were more than 100 related events under the umbrella initiative Shine Weeks, which aims to create a “society where women shine”. One such event was a womenomics forum held by the British Chamber of Commerce in Japan (BCCJ) that gathered together school students and women managers working for British firms in Japan.

Blair, who was criticised by the British media for being “outspoken” during her time in 10 Downing Street, described how she had been raised to be ambitious. “I was brought up by two very strong women when my father abandoned my mother when I was eight”, she said. “They had not much education but were keen for my sister and me to have better chances”. 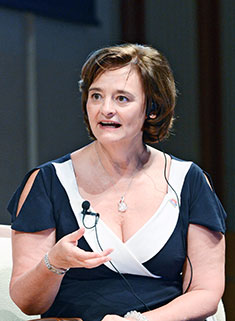 Appearing on stage with Ms Abe, Blair explained how she went on to become the top law student in the country in her graduating year, and competed directly with her husband, Tony, for jobs in law and politics. “We agree that he is the better politician and I am the better lawyer”, she added.

Ms Abe, despite a radically different upbringing, agreed that it does prime ministers no good to have a subservient spouse.

“I had to marry before age 25”, she said, “because women were called Christmas cake—after 25 you are left over. I did not have big ambitions. My father cautioned me not to have strong views when I spoke with boys”.

Today, Ms Abe is affectionately known as “the domestic opposition” for her frequent questioning of her husband’s policies.

Reinforcing the personal anecdotes were some damning statistics on the chronic under-representation of women in leadership roles in Japan, delivered by Lagarde: Japan’s gender–wage gap is 29%, while 60% of women abandon their careers when they have their first child. They are then sidelined into “informal, temporary, or part-time work”.

For those who would argue that part-time work is women’s choice, she made it clear that it’s a choice born of desperation.

An August report by independent brokerage and investment group CLSA states, “If a woman returns to work [after having children] as a non-regular employee, she earns 49% less than a male regular worker … So, the labour market is being hit by a wall of women charging half-price for their labour”.

Family-friendly hours do not exist at the majority of large Japanese firms. “Companies demand long hours, insist on face time, and tie pay to seniority rather than merit”, said Lagarde.

Only 2.6% of Japanese fathers take their paternity leave entitlement, compared with nine out of 10 British fathers. This culture of presenteeism, rather than results-focused work, has left Japan with a productivity rate 34% lower than the G7 average.

Women who do not wish to accept low-grade, part-time work increasingly remain childless, with devastating consequences for Japan’s future. The working age population, which was at a peak of 87mn in the mid-1990s, is expected to fall to 55mn by 2050.

The argument of the IMF, the Organisation for Economic Cooperation and Development, and a host of investment banks is that Japan simply can’t afford to continue keeping women out of the workplace.

There are financial benefits to taking women seriously, said Lagarde. “The Fortune 500 companies with the best records of promoting women have been shown to be 18–69% more profitable than the median firm in their area.

Lagarde recommends liberalising the childcare market (currently dominated by state providers), and switching to a system in which pay and promotion are based on performance and productivity, not overtime or years served. Both sexes should be incentivised to take parental leave.

Finally, she is a reluctant advocate of quotas, saying they are necessary, “not for ever, but for a long enough time that the gap is reduced to the point where we can let the expression of talents finish the job”.

Her view was supported by most of the women senior managers who shared their experiences with school-leavers at the BCCJ forum on womenomics.

The panel discussion on 19 September, supported by the Ministry of Foreign Affairs of Japan and the British Embassy Tokyo, was the latest in a series of diversity-related events held by the BCCJ over the past two years.

According to Lori Henderson MBE, executive director of the BCCJ, these seminars have been particularly popular with Japanese firms.

Julia Longbottom, deputy head of mission, said that the British Embassy had helped to organise the BCCJ event because it considered gender equality to be a core British value.

“We believe strongly in the importance of diversity and the ability of every individual to fulfil their potential”, she said. “We are missing out if economies like the UK and Japan are not maximising the potential of women”.

“We hear a lot about those ‘pull factors’—women choosing to leave [employment] to spend more time with their families. What are overlooked are the ‘push factors’. Women tell us that they leave because they’re stuck, they’re not being promoted, they’re frustrated”.

The problem, she said, is that “women are often assumed to be suited to supporting roles, and are overlooked for promotion”. Christine Wright, Asia managing director of Hays plc, a global recruitment firm, agreed, saying, “we see a lot of women moving at mid-career because they are not getting the same opportunities as men”.

Several young women present said that they were pessimistic about the future. “The advice I’m given a lot is that Japan is not the best place to job hunt if you’re a woman”, said Nodoka Oyama, an intern at the British Embassy Tokyo.

Corine Shimazu, a pupil at the British School in Tokyo, outlined the basic problem as she sees it. “Japan cannot get over conventional expectations of women. Nice women are like AKB48—silent and pretty”, she said. “My guy friends tell me I’m very male and cocky when I express my opinions”.

Japan—with its big-eyed moe (cute) characters, maid cafes and schoolgirl fetish—can be said to idealise and infantilise women to an even greater extent than the global norm.

Mr Abe inadvertently played into this in his speech at WAW when he listed examples of women’s business success—a handbag designer, a childcare provider, a designer of a laptop that allows women to “open it without damaging their fingernails”.

This list of stereotypes provided the perfect illustration of his subsequent statement that “the most difficult part [of empowering women] may be transforming the division of roles based on gender, something that is, unwittingly, firmly ingrained within us”.

Yet, the fact that these issues are even being discussed by a Japanese prime minister represents progress, and has been warmly welcomed internationally.