At more than 4,500 years, the Great Pyramid of Giza is the oldest of the Seven Wonders of the Ancient World. But despite years of study, mysteries about its origin and purpose continue to deepen.

In 2017, a team of Japanese and French scien­tists announced they had studied the structure for two years and discovered that it contains a cavity some 30m long. To make this discovery, they used a power­ful new tech­­nique called muography that promises to open new areas of collaboration between the UK and Japan for scientific research and commercial applications.

The discovery of two voids has been controversial, and some experts question their significance. With no way to access the cavities, it’s impossible to say what they may contain or why they were incorporated into the monument to Pharaoh Khufu, who reigned from 2589 to 2566 BC as the second pharaoh of the Fourth Dynasty of ancient Egypt. One theory is that they were designed to relieve weight from the roof of the Great Gallery, the passage that ascends to the King’s Chamber.

Those secrets may be revealed by muography, a technique that makes use of particles called muons, the heavier cousins of electrons. Muons are created when cosmic rays flying through space collide with air molecules in Earth’s atmosphere. Every square centimetre of our planet is showered with muons at all times. But as they move at near the speed of light and interact weakly with matter, we do not notice them. Compared with imaging techniques such as X-rays, muons are freely available and can be found just about anywhere. 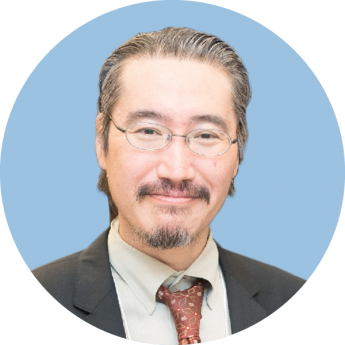 “High-energy muons can penetrate as far as 2km within solid rock and, therefore, similar in prac­tice to X-ray machines, can be used as an imaging tech­­ni­que to see within gigan­tic objects such as volca­­noes, pyramids and nuclear reactors,” Hiroyuki Tanaka, a professor and director at The University of Tokyo’s International Muography Research Organization (MUOGRAPHIX), told ACUMEN. “Along with being capable of imaging potential minerals or energy resources under­­ground, muography is also a non-destructive technique”.

Tanaka has been studying muography for decades and is a pioneer in the field. He has collaborated with other researchers—including those from the UK—to study a range of uses for muography. These include scanning under­ground water tables as well as seismic fault zones and volcanoes—an important application for a seismically active country such as Japan, which is home to the still-active Mount Asama.

Aside from shedding light on geological features, muography also has industrial applications. In 2016, Japanese researchers installed a muon detector—about the size of a washing machine—in the Unit 2 reactor of the crippled Fukushima Daiichi Nuclear Power Plant. The researchers were able to get a virtual peek inside the highly radio­active pressure vessel and deduce the presence of nuclear fuel debris.

“Social infrastructure—including silos for nuclear waste, bridges, highways, underground pipe systems—constructed in the 1950s is getting old and needs to be maintained, but there was no practical method to evaluate the degree of ageing,” explained Tanaka. “Muography can offer a completely new visualisation tech­nique for non-destructive evaluation and testing of these structures. Muography will, in particular, contri­bute to industry, innovation and infra­structure for global safety, part of the United Nations Sustainable Development Goals (SDGs)”. 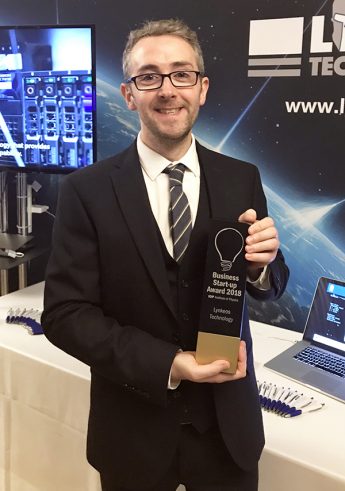 Since the SDGs were established in 2015, research into muography has led to the develop­ment of possible commercial applications. These include scanning the following:

There are just a handful of muography firms in the world, and only a few are at the stage of providing services.

One innovator winning awards and making a name for itself is Lynkeos Technology Limited, a Scottish firm spun off from the University of Glasgow’s nuclear physics group. It’s funded by the UK Nuclear Decommissioning Authority through Sellafield Ltd, which is overseeing the decommissioning of the Sellafield nuclear fuel reprocessing site.

In conjunction with the university, Lynkeos has developed the Muon Imaging System to better detect and manage radioactive waste. Because muons scatter when they hit uranium, the system can be used to determine whether ageing nuclear waste containers remain intact. It’s a relatively inexpensive way to test nuclear waste materials and provides an option where no other technologies exist.

“When we spun out Lynkeos, we were very quickly successful with Innovate UK funding to commercialise our Muon Imaging System, which has now been deployed at Sellafield,” said David Mahon, a researcher at the University of Glasgow and a director at Lynkeos. “This has been used for imaging trials on waste samples for the nuclear industry”.

Mahon believes that muography will benefit industries such as mining and security, as well as carbon capture and storage. Meanwhile, the field will benefit from increasing scientific collaboration between Japan and the UK—muography scientists attended conferences in both countries last year.

Cosmic-ray muography is being applied to various areas of business 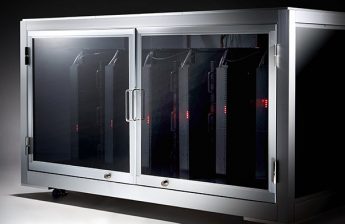 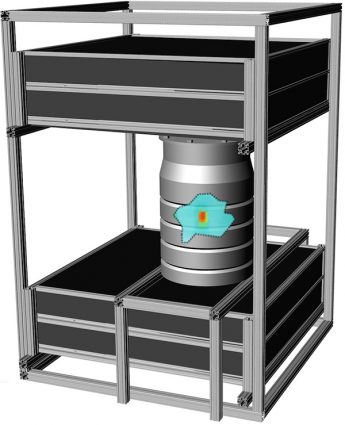 The UK has made carbon capture and storage (CCS) an important part of evolving energy policy initiatives. In 2018, the UK government pledged £21.5m to spur innovation in CCS as part of one of seven Mission Innovation challenges that came out of the COP21 Sustainable Innovation Forum 2015, held in Paris.

In 2015, scientists announced that carbon dioxide levels in the Earth’s atmosphere had reached 400ppm, up about 50% from pre-industrial levels. To slow atmo­spheric warming and climate change, researchers and industry are experimenting with CCS, a field in which researchers in continental Europe, as well as those based in the UK, are taking a leading role.

For instance, Norwegian energy firm Equinor ASA captures about 1mn tons of CO2 annually from the Sleipner West natural gas drilling plat­form in the North Sea and stores the carbon 1km below the seabed.

One problem with CCS is leakage. Checking for leaks from underground reservoirs is expensive, but muography may prove to be a game-changer.

In 2012, researchers in the UK and the US developed a simple muography model that could detect a change of as little as 0.4% in the mean density of a reservoir at a depth of about 1km.

In a related study published in 2018, scientists at the University of Sheffield and other centres described their successful development of a solid-state muon detector designed for underground CO2 reservoirs. The study also followed the detector’s two-month testing in a 1.1-km deep borehole at the Boulby Mine in northern England.

“We wanted to see how the equipment worked in this dusty environment of elevated temperatures, as well as getting the signal out of the detector itself,” said Lee Thompson, a professor of particle physics and astrophysics at the University of Sheffield and a co-author of the study.

“At those depths, the muon flux does get attenuated some­what, but we were able to clearly see muons passing through the system at a frequency that we expected. We’ve kept the work going through other avenues, one of which is quite exciting because we’ve filed for a patent for muography use in a commercial application in a key UK industry,” explained Thompson, adding, “Unfortunately, I can’t say anything more about it right now!”