In the business press, there is no shortage of articles lionising the latest “disruptive” startup. Whether it is in the world of tech or finance, there is always some hot new business attracting praise and attention. But what can be lost in the noise is that there are firms with long, rich histories that continue to play an integral role in underpinning business today. What these may lack in terms of eye-catching IPOs or product announcements, they more than make up for in serious business and a quiet innovation of their own.

One such firm is Johnson Matthey Plc, which got its start as a gold assayer in 1817 and today specialises in sustainable technologies. With products that can be found in everything from cochlear implants to oil refineries, the firm this year celebrates its 200th anniversary. To mark the occasion, Chief Executive Officer Robert MacLeod embarked on a breakneck, round-the-world tour to visit a number of the firm’s offices.

On his stopover in Japan, where the firm has had a facility for 24 years, MacLeod attended a ceremony to celebrate the firm’s history and achievements. During his brief visit, he sat down with BCCJ ACUMEN to discuss Johnson Matthey’s operations and what the future holds for the business. 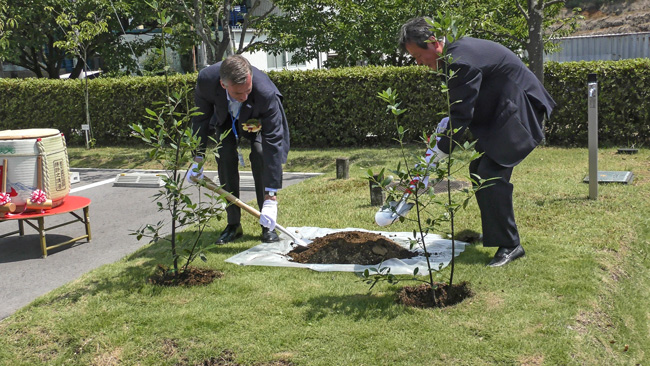 Cleaning up
Johnson Matthey comprises four divisions, however the vast majority of its operations in Japan fall under the rubric of clean air—others, such as those dedicated to improving health, are primarily focused on Europe and North America. The portion of the business in Japan is concerned with controlling emissions, and for Johnson Matthey that means their catalytic converter technology, which has found its way into cars the world over.

But the impetus for the firm’s start in Japan came from the other side of the Pacific Ocean, after enhanced restrictions on car emissions were put in place in the United States following major amendments to the Clean Air Act in 1990.

“They put regulations in place and, for a while, they could start off by meeting the regulations just by tweaking the engine and the engine management system. But then, as the regulations got tighter, they had to find another route, and that’s how they started to get involved in catalysts”, MacLeod explained. “It started in the United States, and it’s all very well having the production plant there, but the decisions on the technical side were made [in Japan].

“Even today, for all the Japanese car companies—Honda, Toyota, Nissan, Suzuki—the purchasing decisions are made here in Japan, because they’re made on a technical basis”.

To get the technical approval the firm needs, it carries out various tests at its research centre in Sakura, Tochigi Prefecture. And that facility has since been joined by a manufacturing plant, which was established 15 years ago. One of 10 Johnson Matthey factories around the world, it annually produces about 3mn of the 50mn catalysts that the firm makes globally.

“What happens is typically that you make the product in the market, the country or the time zone in which the customer’s manufacturing plants are—you don’t ship these products overseas because that’s just too expensive”, MacLeod explained.

That’s because they contain valuable precious metals, and even though the amount of metal used is quite small, the value is high. This, in turn, affects the value of duties that need to be paid. The parts would also need to be transported by sea, meaning that working capital would be tied up for a substantial amount of time. With Japan’s adoption of its own emissions regulations, it became necessary to have a manufacturing base in the country.

“It’s grown a little bit over the years because the regulations have tightened, and as the regulations tighten, it has required a bit more complexity of the catalyst and more parts per car”, MacLeod said. “But the Japanese market over the last few years has been relatively stable, so we haven’t had to add much manufacturing capacity recently”.

What expansion has occurred has been driven by the expansion of regulations for trucks and motorcycles. But the firm has been working to make its catalysts more effective and, thus, more competitively priced. This is achieved by researching and developing new products that contain less metal, but give the same performance. Reducing the amount of metal, in turn, generates a cost saving that can be passed on to the customer.

“For example, if we can reduce metal to give a five dollar cost saving in a car costing $15,000, that sounds very little. But for a car company, $5 per car for several hundred thousand vehicles or a million vehicles—it just all adds up.

“But, of course, regulation has tightened at the same time. And normally, as regulations get tighter, the easiest way to meet the regulation is to put some more metal on it”. 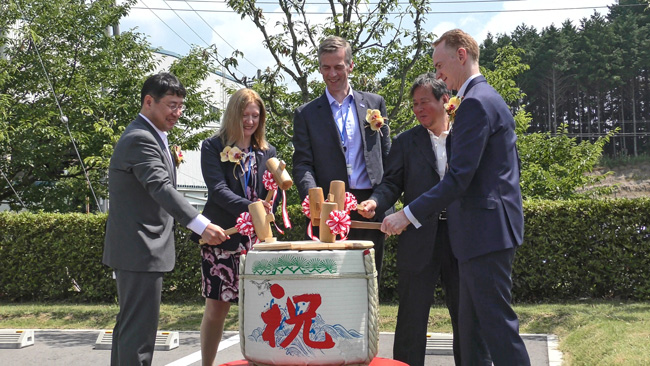 Catalyst for change
The big change on the horizon for Johnson Matthey comes from electric cars. While hybrid vehicles will still require catalysts, fully-fledged electric vehicles won’t, due to the absence of an internal combustion engine. To adapt to that change, the firm is having to call on its knowledge of chemistry and apply this to the materials that go into vehicle batteries. In particular, it will mean focusing the firm’s research on the material used for the cathode—what MacLeod describes as “the clever bit, the hard bit about a cell”.

“Johnson Matthey is never going to be a cell manufacturer; that’s not what we do. That will be for the likes of Panasonic, a Samsung, LG maybe, some big Chinese firms.

“We are actively looking at, and already have a business that makes, cathode materials—lithium-based cathode materials. But this market is growing very rapidly and the opportunities are very significant, so we’re investing in more and more technology to come up with better material to make the cell last longer, charge quicker, have more range and, of course, be of lower cost”.

Currently, very little of that research is done in Japan—Johnson Matthey’s main research centre is in the UK—but that could change, particularly if a Japanese firm emerged as a leader in batteries.

“I suspect in the future we will want to have some capability here, whether it’s manufacturing capability or research capability—I don’t know yet”, said MacLeod. “It’s more likely to be manufacturing than research, if I was to bet today. And again, is it going to be Japan? It might be Korea, it might be China. It depends where the cell companies are because, ultimately, it’s going to be the cell companies—the cell manufacturers—that will want the material and we will want to be fairly close to where they are. 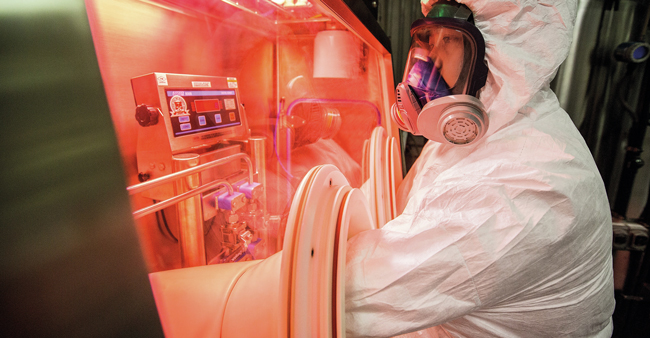 Johnson Matthey’s knowledge of chemicals is central to its innovation.

“But it’s probably relatively transferable—once you know how to make a material and you’ve got some [intellectual property rights] over that material, then you can transfer it to another part of the world quite easily and quite quickly, as long as the production process is broadly similar”.

Although the imminent demise of the internal combustion engine is now widely predicted as battery technology improves and governments throw their weight behind electric vehicles—the UK government has announced a ban on pure diesel and petrol cars and vans starting in 2040—MacLeod nonetheless predicts his firm’s catalyst business will continue for the foreseeable future.

“It will certainly start at the smaller car, where you’ll end up with batteries first. But that’s where we’ve got an opportunity to be part of the world’s evolution in power train development”.