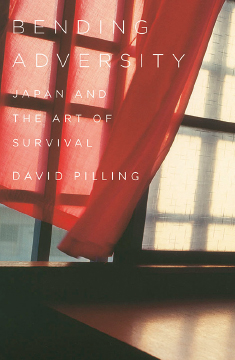 Bending Adversity: Japan and the Art of Survival. Allen Lane, £20.00

I have always been a great admirer of David Pilling’s journalism. As a thinker, analyst and stylist, he is outstanding. Further, he is one of the main reasons the Financial Times (FT) is required reading for anyone who aspires to understand this region.

I have a particular respect for the fact that, when he was an FT Tokyo correspondent, he made a serious (and successful) effort to study the Japanese language. Few of his fellow scribes were as diligent, and the results are demonstrable.

Time and again, his columns made the ever-complex maze of Japanese economics and politics accessible to a readership that had few other interpreters to whom to turn. It was inevitable—as one hoped—that a book would ensue.

What we have is the most important book on Japan to be published in the last two decades.

This is not a book about 3/11—although it deals with the triple disaster most thoroughly and with tremendous insight—and yet you feel it could not have been written in quite the same way if the earthquake, tsunami and subsequent nuclear meltdown had not occurred.

Pilling explores with great acumen such issues as the controversial ministerial visits to the Yasukuni Shrine in Tokyo’s Kudan district and the varying attitudes of the prime ministers who have gone through the notorious revolving door of late.

He considers in detail the recent debate over whether Japan’s use of “comfort women” merits the attention it is getting, and recounts a chilling meeting with the granddaughter of Hideki Tojo, the wartime leader who ordered the attack on Pearl Harbor and was later executed.

Closer to home, Pilling looks at the background to the ongoing argument over what the Japanese call the Senkaku Islands, the uninhabited islets in the South China Sea that the Chinese also claim. His explanation of the history surrounding the issue is most illuminating, but leaves us with a sense that this dispute will not soon be resolved.

The chapters that deal with Fukushima, post-disaster, are vivid and distressing.

Many of us who were on the ground here on 11 March 2011 suspected we were not being given the truth. We were right. The extent of the cover-ups and distortions is alarming.

Tokyo Electric Power Company comes out of this extremely badly and Pilling makes no bones about why. But the Japanese government should not exactly think of itself smelling of roses.

Frankly, the 3/11 experience really serves as an illustration of just how poorly the Japanese government is placed to serve the people. Pilling’s book brilliantly illustrates the shortfalls.

What it doesn’t do is to suggest in concrete terms how this might be remedied—and maybe that is not what the role of a foreign observer ought to be.

Pilling’s book covers much more than this and is a commanding read. It is entertaining and enjoyable as well as informative. Truly, a special find.