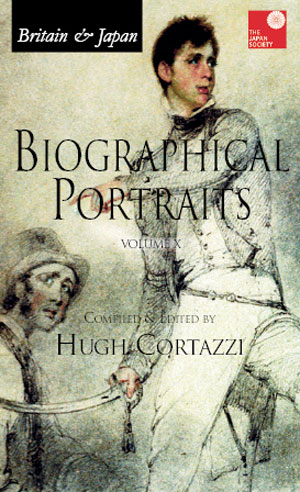 All of the volumes in this magnificent series of publications are weighty, but this latest volume is the weightiest of all. It includes no fewer than 69 contributions, covering a very wide spectrum indeed. In total, to date, some 600 “portraits” have been published and, as Hugh Cortazzi writes in his introduction, “The result is a unique record of people, firms and other bodies who in ways great and small have contributed to the quality and enduring value of our bilateral relationship. I do not know of any similar series in any other country …”.

The scope of the latest book is impressive. Part one looks at Britain’s presence in Japan, and the section headings give some idea of the breadth of coverage: “Personalities and Entrepreneurs”; “Writers and Broadcasters”; “Missionaries”; “Politicians”; “Officials and Diplomats”; “Scholars”; “Business, Trade and Investment”; and “Culture”. Part two, which looks at Japan’s influence in Britain, is similarly comprehensive.

The contributors—all of whom write for no reward—are a mixed collection. They are academics, current and former diplomats, lawyers and people from other walks of life. Thus, the style of writing varies from chapter to chapter, though each is never less than interesting.

Former British Chamber of Commerce in Japan (BCCJ) Executive Committee (Excom) member Yuuichiro Nakajima pens an entertaining account of the life of the late Chris McDonald, while his former Excom colleague Tony Grundy contributes a worthy piece on English lawyers and Japan from the 1960s to the present. There is even a chapter devoted to a history of the BCCJ from 1948 to 2015, though modesty forbids any comment on its merits.

By way of balance, Patrick Macartney offers a portrait of the Japanese Chamber of Commerce in the UK from 1959 to 2015. Sadaaki Numata writes knowledgably about young Japanese diplomats studying at British universities, and Hugh Cortazzi himself—in one of his many contributions—offers a moving portrait of the late Kazuo Chiba, former Japanese ambassador to the Court of St James and whom he describes as an “outstanding Japanese diplomat”.

It is highly unlikely that anyone will choose to read this book from cover to cover. It is ideal for dipping into, which is why I have one small gripe: the index could be better. For example, I looked up Sir John Boyd, a former British ambassador to Tokyo and was directed to a chapter on another former ambassador, Sir Michael Wilford, written by yet another, Sir David Warren. But this is a small niggle. The chapters on the former UK ambassadors are highly entertaining and informative, and the entire volume is a must for anyone with an interest in UK–Japan relations.