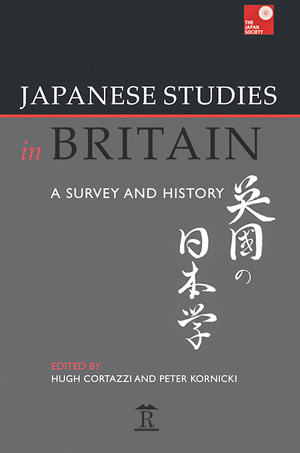 The British are not particularly known for their embrace of foreign languages. Compared with our cousins in Continental Europe, we fall a long way short; while many people there speak several languages with comparative ease, relatively few in the UK have fluency in a second language. So it may come as a surprise to many to learn that Japan (in terms of its language, history and culture) is a thriving area of study in many UK universities and institutions.

This handsome new book from the Japan Society sets out to put that into perspective, with contributions by a number of scholars from universities across the country. It takes an in-depth look at the study of Japan in contemporary Britain, concentrating on the universities where Japanese studies are an honours degree subject. It also manages to summarize most effectively the history of Japanese scholarship in Britain and draws attention to the key players and benchmarks that facilitated and underpinned the quality of scholarship achieved.

The list of contributors is extremely impressive: keen followers of the Anglo–Japanese relationship will recognize many of them. And the editors could not have better credentials.

Sir Hugh Cortazzi GCMG, who was the UK’s ambassador to Japan from 1980 to 1984, was also a long-serving chairman of the Japan Society. He studied Japanese at SOAS University of London, and has authored and edited numerous publications on Japan, several of which have been reviewed in previous issues of BCCJ ACUMEN. His co-editor, Peter Kornicki, is emeritus professor of Japanese at the University of Cambridge. In the past he has taught at Kyoto University.

If all this sounds rather dry and academic, be reassured. The number of contributors involved ensures that there is variety among the chapters, and the editors are skilled enough to ensure that the book makes for comfortable reading. It is a convenient snapshot of the present state of Japanese studies in Britain and is also a very useful reference regarding the present options for studying Japan at British universities.

Further, it offers a broad perspective on the role, relevance and future direction of Japanese studies. More generally speaking, the book should prove relevant to any reader with an interest in the on-going development of the relationship between the UK and Japan.