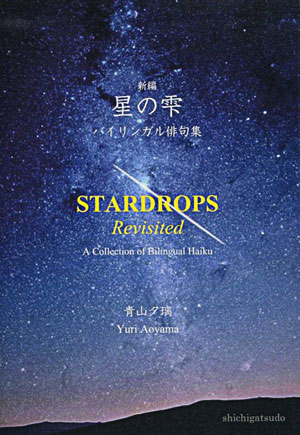 Haiku is an expressive, concise form of Japanese poetry, but for those who are not specialists in the field, the meanings of haiku may not be easily understood. However, Yuri Aoyama’s Stardrops Revisited: A Collection of Bilingual Haiku, on the theme of stars, may provide readers a chance to pry open the door to this literary form.

Born in Tokyo, Aoyama published her first poetry book, Albion Wind, in 2006, and her first haiku book, Stardrops, in 2009 in Japan. As a member of The Poetry Society in London and Tokyo’s Haiku International Association, her in-depth understanding of the Japanese poetic genre comes through clearly in this new volume.

Aoyama’s love of the stars can be traced back to her childhood, when she was drawn to watching the night sky. Her belief that the stars—forever forming—offer rays of hope in a world constantly at war and vulnerable to nuclear threat comes through in many of the verses.

Although Aoyama was born after World War II, she includes haiku that depict the desolation brought about by the atomic bombings of Hiroshima and Nagasaki. These poems are scattered throughout the final chapter, “Shooting Stars”, although the first reference to the national disasters is in the first chapter, “Winter Constellations”:

But verses of hope and peace also pervade the pages. The stars act as glimmers of optimism, while strong voices bear messages of peace.

The haiku of “Winter Constellations” embody a feeling of connectedness that takes the reader on a journey through the seasons, including winter snow, autumn winds and spring cherry blossoms.

Throughout the anthology, Aoyama’s choice of words and imagery lend themselves to individual interpretation. Meanwhile, particular phrases, such as, “hearing the wind”, “a soundless night” or “your voice is no longer heard” in the depths of snow, silence everyday thoughts, resonate and transport the reader.

In “Shooting Stars”, one haiku on the theme of national disaster particularly stands out as a profound remembrance piece:

Throughout the book, Aoyama references remembrances and anniversaries that had a personal resonance during her life.

Travel is another theme, and Aoyama takes us on a journey from London to Kyoto, Tahiti, the Maldives, the Aegean Sea and the Caribbean, as well as to the Tropic of Cancer and the cosmic Milky Way.

On a more personal level, she bears witness to musical movements, changing relationships and the journey that is life. “The Star Festival” chapter includes verses mentioning her mother and father and the colourful combination of both their characters and personalities.

Beginnings and endings feature throughout the volume, be it through the end of seasons, human life, relationships or emotions.

to the living
to the dying
spring moon

The juxtaposition and seasonal themes that are characteristic of Japanese haiku are honoured, even in translation. It is easy to go through each translation, verse by verse, visualising the meaning of each, and pondering further the origin of Aoyama’s thoughts. And, perhaps, even how those thoughts relate to our own lives.