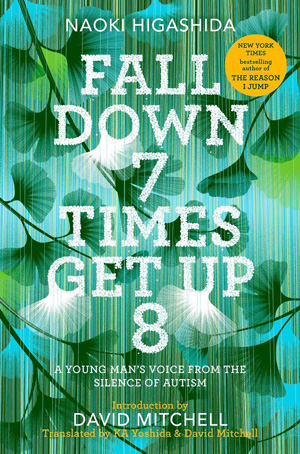 Fall Down 7 Times Get up 8:
A Young Man’s Voice from the Silence of Autism

According to the US advocacy organisation Autism Speaks, “Autism, or autism spectrum disorder, refers to a range of conditions characterised by challenges with social skills, repetitive behaviours, speech and nonverbal communication, as well as by unique strengths and differences”.

Naoki Higashida was only 13 years old when he wrote The Reason I Jump, his account of autism from the inside by a non-verbal child. It became an international bestseller and was reviewed in BCCJ ACUMEN at the time. Now comes another illuminating peek into Higashida’s world, this time from his perspective as a young adult.

As with the previous book, it consists of concise and revealing pieces on a broad range of subjects, from Higashida’s school experience to his family relationships. It is full of insight into what it is like to live on the spectrum. For example, Higashida describes in detail the mental steps he has to take to register that it is raining; for most of us, it is something we do not even have to think about.

As with Jump, David Mitchell—himself the father of an autistic son—provides yet more insight in his excellent introduction: “I met [Higashida’s] writing before I met [Higashida]. My son has autism and my wife is from Japan, so when our boy was very young and his autism at its most grimly challenging, my wife searched online for books in her native language that might offer practical insight into what we were trying (and often failing) to deal with. Internet trails led to The Reason I Jump … Our bookshelves were bending under weighty tomes by autism specialists and autism memoirs and, while many of these were worthy, few were of much ‘hands-on’ help”.

Mitchell goes on to say that his wife took a punt on Jump, largely because their son and Higashida are roughly the same age and both are non-verbal.

“Many of its short chapters shed immediate light on our son’s issues: why he banged his head on the floor … why he would be seized by fits of laughter or fury or tears even when nothing obvious had happened to provoke these reactions. The Reason I Jump offered plausible explanations directly from the alphabet grid of an insider”.

Higashida is incapable of a free-flowing conversation, but through patience and perseverance he has learned to communicate by “typing out” sentences on an alphabet grid—“a QWERTY keyboard layout drawn out on a sheet of cardboard with an added YES, NO, and FINISHED”.

An arduous way to complete such a work, no doubt. But Higashida is nothing if not determined, and his new book is another attempt to foster a better understanding of the sometimes bewildering spectrum he lives on and to encourage society to see people with disabilities as people—not as problems. Higashida demonstrates with tenacity and good humour that no matter how often he falls down, he always gets back up.