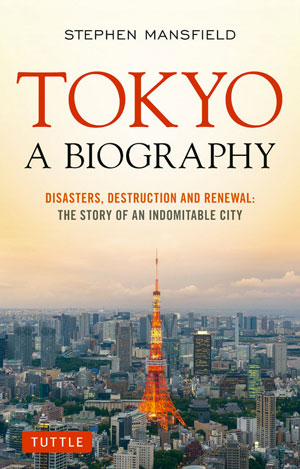 There must be dozens—if not hundreds—of books out there on Tokyo. Almost everyone in Japan with aspirations to be a writer has produced one. But there always seems to be an appetite for more, especially for one as insightful and well written as Stephen Mansfield’s latest offering. He has broached the subject before (Tokyo: A Cultural and Literary History), but in this volume has proved himself beyond doubt. His photojournalist eye and facility with language make this British-born, long-term resident of Japan an ideal observer of, and commentator on, Japan.

Here is his wonderful introduction to the book, which is subtitled Disasters, Destruction and Renewal: The Story of an Indomitable City:

“The flocks of Grus japonensis, the red-crowned crane, wading in the winter salt flats and tidal marshes were not alone among avians nesting or sojourning along the swampy inlets of the bay. There were kestrels, egrets, Mongolian plovers, curlews, hawfinches, and the Japanese crested ibis, but it was the migratory crane—omnivorous consumer of crabs, snails, salamanders and dragonflies—that would acquire special distinction as a Taoist symbol of immortality and fidelity, before it, too, like the city destined to rise here, would pass through cycles of growth, near extinction, and transformation”.

Tokyo has a long history and Mansfield manages to cover it succinctly in his book, which spans its earliest days through to the present, recounting how often the city has faced almost complete destruction—everything from natural disasters to regime change—only to rebuild itself and rise again.

Not surprisingly, Mansfield touches on the Great Kanto Earthquake of 1923 that within minutes levelled two-thirds of Tokyo and much of neighbouring Yokohama. The second tremor and resulting fires only added to the damage.

“Builders at the Imperial Palace, tasked with reconstructing damaged sections of the old fortifications in the aftermath of the earthquake, would come across a number of skeletons standing erect within the walls. Known as hito bashira (pillar men) the gruesome sight, adding to the already phantasmagoric character of the city, recalled an ancient custom whereby human sacrifices were incarcerated within river embankments, bridges and castles in the belief that such offerings would appease the gods and reinforce the structures”.

In Tokyo, there is quite a story to tell and Mansfield manages to do it with great skill. He paints a picture of a city that is perhaps unrivalled in its uniqueness. As he puts it, “Tokyo … does not need a past for its future to flourish”. And so it would seem.

The book is wonderfully illustrated and has a most helpful bibliography. Rather more unusually, but equally useful, it has a filmography, which is quite extensive.