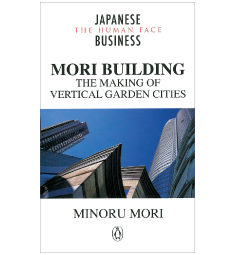 “People who live in glass houses shouldn’t throw stones”. Shouldn’t there be a similar aphorism for people who build increasingly higher structures in earthquake zones? Were there such a thing, no doubt the late Minoru Mori (24 August 1934–8 March 2012) would have had a ready answer.

Mori’s vision of creating a world of vertical garden cities has been explored, admired and respected (and, it has to be said, in some quarters criticised) for decades, and as an articulate defender of that vision and what it meant for people living in cities, he frequently was the subject of media interviews.

Now there is a definitive English-language exploration of what Mori intended and how he believed it would radically change urban life-styles—and for the better.

Since the concept for the design of Mori Hills was launched, many issues have been raised in the public forum. Is the acquisition of large swathes of city land at the expense of small domestic and commercial communities ethical? Do such large-scale projects damage or benefit the environment? And what about the social responsibilities of those who would seek to make revolutionary changes in terms of city planning?

In Mori Building, which comfortably addresses most of these issues and more, powerful and influential building tycoon Mori is not afraid to answer his critics in a well-researched and considered way. It is especially interesting to read how the concept of double-deck lifts (two vertically connected cars that stop at two floors simultaneously) came into being.

Interestingly, at the time the English-language version of the book was being prepared, the Great East Japan Earthquake struck, and so the book incorporates a fascinating prologue that centres essentially on what happened at the Roppongi Hills complex. It makes for intriguing and reassuring reading.

Somehow comforting, albeit in a naive way, are seemingly small points, such as the fact that in the 51st-floor Roppongi Hills Club, not a single glass or piece of crockery was broken. At a time when we are told to expect further major tremors, it is greatly to be hoped that other building managements are as equipped and prepared as are the Mori Building Co.

March Was Made of Yarn
Reflections on the Japanese Earthquake, Tsunami, and Nuclear Meltdown
Edited by Elmer Luke and David Karashima
¥1,800 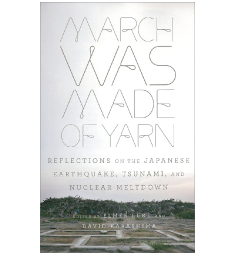 Certain events have such a profound effect that the dates associated with them become iconic. We all know where we were when JFK was assassinated; man first walked on the moon; planes hit the New York Twin Towers.

Now among these events, the Great Eastern Japan Earthquake, tsunami and nuclear meltdown are writ large—certainly for those of us who were on the ground then, for that ground shook as it had never in our lives shaken before, and few would wish it to so shake again.

There is no doubt that something profound happened to the national psyche as a result of the triple blow of 11 March 2011, but Japan has yet to come to terms with what that really means.

March Was Made of Yarn is an attempt to do that. A collection of non-fiction pieces, stories, poems and even manga, these reflections—on what has inevitably been named 3/11—make for sometimes uncomfortable, yet heartening reading. The roll call of the writers and translators involved is most impressive. Some, like Japanese novelist and filmmaker Ryuu Murakami, are already household names outside Japan, but even the less recognisable names have impeccable credentials—while Elmer Luke and David Karashima, as editors, have done a masterful job of bringing the whole together.

The collection is all the more powerful because few, if any, of the pieces are predictable; there is always something else going on beneath the surface. True, the disaster is the backdrop for the scenes that are played out, but the drama lies in often unexpected places. The tension on which storytelling depends, if it is good and holds the reader’s attention, is frequently cleverly generated in ways that are not immediately obvious at all times.

It is unlikely that many will have the stomach to digest this volume at one sitting, but it is an enthralling compilation of highly readable pieces that repeatedly draws in the reader.