If your experience of Japanese alcohol extends to mass-produced lager, generic sake or a dash of blended whisky diluted to within an inch of its life, then Drinking Japan may be the book for you. I would offer the same advice for the growing number of foreign residents already familiar with Japan’s myriad craft beers, and its better-known premium sake and award-winning single malts.

Painstakingly researched and solidly written by Chris Bunting, a Yorkshire-born journalist living in Tokyo, Drinking Japan doubles as a history of the country’s relationship with alcohol and a guide to some of the best places to imbibe it.

And all for the price of a couple of pints of decent Japanese craft beer.

Bunting leaves no stone unturned. As you’d expect, there are extensive chapters on sake, whisky and today’s popular distilled spirit, shochu. But the year Bunting spent travelling the length of the country also turned up a selection of less celebrated Japanese contributions to the global booze supply.

Generous space is given to Okinawa’s awamori and there is a lengthy nod to Japanese wine, some of which are surpisingly good. Bunting also discusses Japan’s quirkier tipples, notably Denkibran, a Meiji-era concoction best sipped with caution alongside a draught beer among the shitamachi crowd at the Kamiya Bar in Asakusa.

Each selection of bar guides is preceded by a short history of the beverage concerned, its cultural context, and plenty of anecdotes. It was somehow heartening to discover, for example, that the French philosopher couple Jean-Paul Sartre and Simone de Beauvoir swigged their way through litres of Japanese whisky during a visit here in 1966.

Replete with maps and easy-to- follow directions, geographically and alphabetically arranged indices of bars on the inside of the front and back covers, as well as a glossary of essential vocabulary and tips on etiquette, Drinking Japan should be required reading for anyone interested in looking beyond big-name brands and immersing themselves in Japan’s rich and varied Bacchanalian tradition.

As Bunting, a convivial host throughout, might say: kampai!

Why did you decide to write about Japanese alcoholic drinks?

My interest started when I arrived in Japan about six years ago. I have never been an alcohol expert, but I have a healthy interest in booze. I think I started out here with a horrible hangover on some industrial-grade sake that I had knocked back in great quantity without a clear idea of how strong it was or how bad it was compared to the real thing.

I slowly started to get my bearings and began to realise the diversity of Japan’s alcohol culture. An early enthusiasm was Japanese whisky. As I found out about the excellence of the Japanese drams, which were winning international competitions against the best Scotland and the US had to offer, I started to look at other Japanese alcohols more closely and realised that there were some extraordinarily high-quality products.

Will the book turn foreign drinkers into connoisseurs?

I really hope it can open a few doors to different types of alcohol in Japan. It is definitely not written as a book for alcohol boffins. I like my booze and am fascinated by the amazing energy, culture and history of the alcohol scene in Japan. I hope the book opens some doors on that.

Which part of your research did you find most educational?

The visits that had the most impact on me were to Kagoshima and Okinawa. Everybody knows about sake, but Japan’s indigenous spirit traditions—awamori and the various types of shochu—are less understood by foreigners. 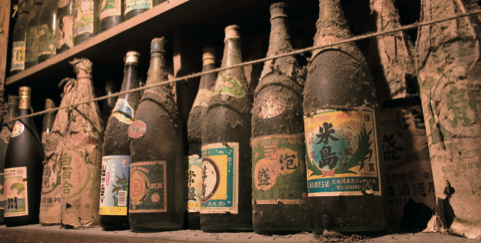 I found tiny two- or three-man operations in the backwoods lovingly producing and ageing their spirits. In Kagoshima, they had wooden stills. I couldn’t understand it at first. Why would you use a wooden still? But they have been making it that way for centuries. They have traditions that are comparable to those of whisky or brandy in the UK or France. And then you start digging into wine- and craft beer-making, and you start to realise that Japan is a real hive of alcohol- related activity.

Your book contains a long list of watering holes. Do you have any favourites?

There are so many bars to choose from, but my current fad is for Japanese craft beer. The really famous pub for this is Popeye in Ryogoku, Tokyo, which has an extraordinary selection. I would urge people also to try out its young challenger, Ushitora in Setagaya ward. It is run by two young owners, Akio Terasaki and Shinsuke Yoshida, and usually has a very good selection of Japanese and foreign craft beers.

For sake try Akaoni, also in Setagaya, or Shusaron (which specialises in koshu aged sake and really opened my eyes to that scene), near Shinagawa Station. Shinagawa Station also has The Zen, which carries a good selection of shochu and awamori.