How a healthcare firm’s staff are helping with disaster relief

The windows on two floors of the Tokyo offices of GlaxoSmithKline (GSK) Japan are blacked out. Most of the lights are turned off in the spacious lobby, while the air-conditioning has clearly been set to operate at a higher temperature than might be expected in summer—although it is still comfortable. And, instead of a throng of employees coming through the front door shortly before 9am on a regular working day, there is only a steady trickle. 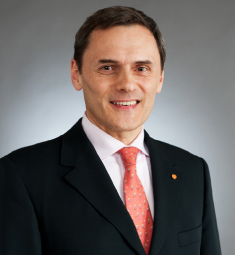 Management and employees of one of the world’s leading pharmaceutical and healthcare firms are clearly making efforts to reduce the amount of energy that is consumed throughout their Japanese operations, in order to reduce the burden on a grid that it was feared would struggle to meet demand after 11 March. Many have been asked to work at home, while posters gently remind everyone to turn off appliances when they are not being used.

Other firms are taking similar measures to reduce the energy consumed, but GSK—a Brentford-based firm that dates back to 1715—has taken its commitment a step further. The money it saves on reduced energy bills will go to Tohoku students who want to study pharmacy at university.

This generous and innovative gesture is typical of a firm created through the merger in 2000 of Glaxo Wellcome and SmithKline Beecham. The merger of the Japan operations was completed in April the following year.

“This year is the 10th anniversary of that merger and we were planning to mark it in April but, less than three weeks before then, we had these disasters in the north of Japan and cancelled all the events”, said Yoshiaki Komatsu, manager of the Corporate Communications Department.

“It was the biggest earthquake that I have ever experienced”, Komatsu said. “Some floors at our offices sustained damage and the whole thing was very frightening”.

After the initial shock at the strength of the tremor, GSK’s disaster plans swung smoothly into operation.

“Our first tasks were to confirm the safety of all our employees and to understand what had happened where, and how serious the damage was”, said Komatsu, a member of the firm’s emergency team. “My role was to gather information and we were able to do that mainly from the media. Luckily, there was no blackout in this area, so we had access to TV and radio broadcasts”.

Staff were temporarily evacuated to the grounds of Meiji Jingu, although more than 400 people had to stay in the office overnight because of damage to transport links. 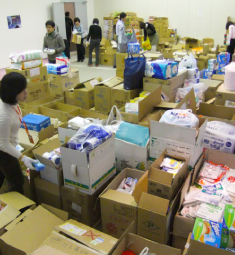 Efforts were immediately started to locate GSK’s sales staff in Tohoku, although it was not possible to confirm that all 174 and their families were safe until Sunday evening, more than 48 hours later.

“Before the weekend was over, we were having discussions about the impact on our business—assessing supply chains, the amounts of medicines available at our production facilities and so on—but we were also very worried about people in the disaster zone and so decided to contribute supplies and help to the rescue effort”, said Naofumi Hara, head of the Communication Division.

The first bus left the firm’s headquarters late on 18 March, laden with bottled water, food, torches, blankets, stoves, batteries and 12 volunteers. Clad in the firm’s distinctive orange windcheaters, the volunteers were quickly dubbed Team Orange, a title that has stuck.

“I was very shocked by what we found”, said Hara, who has volunteered for two missions: one to the isolated Onagawa Peninsula north-east of Sendai, and the other to Higashi Matsushima.

“Small communities on the Onagawa Peninsula were surrounded by low mountains close to the ocean, so when the tsunami came in they were soon under water”, Hara said. “I saw trains, ships, houses and cars all in the same place and not where they should have been.

When asked the reaction of local people to the arrival of the GSK team, Hara goes quiet for a few moments.

“Some of the people came to us bowing and expressing their deepest thanks”, he said. 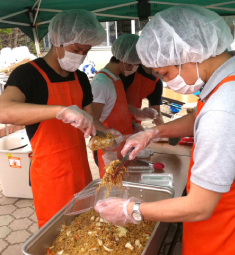 “I considered myself to be just an ordinary member of the team and I was very happy to see our colleagues in Sendai and some of their family members”, he said. “In the city, there were long lines of cars waiting for several hours to get petrol from the few stations that were open. People queued for a long time outside shops to get essential goods”.

The team visited the delivery depot of a business partner in Sendai, where employees were cleaning up the warehouse.

“We could see on our way back—and just a few hundred metres from the warehouse—evidence of the incredible strength of the tsunami”, said Fauchet. Elsewhere, wholesalers’ facilities bore the signs of the natural disasters.

“There is much to do in the region and, as GSK, we will continue to contribute and try to do more”, he added. “I also believe that, as individuals, there is a call of duty to serve the country and help the reconstruction. I encourage all those who are fit to take the Team Orange bus and bring smiles and hope to those in need”.

In terms of the medicines that GSK could provide, the rules are very strict—even in a disaster. Medicines can be delivered only to doctors and medical institutions. One of the first drugs urgently required was Flolan, used to treat a rare and specific form of hypertension. And, because land transport links were so badly damaged, helicopters were chartered to deliver supplies of the drug that were needed at hospitals in Fukushima and Miyagi prefectures. Other drugs were delivered by sales representatives travelling by taxi.

To date, the firm has provided more than 800,000 packages of medicine, valued at ¥184mn, on top of an initial donation of ¥210mn to the Japanese Red Cross on 15 March, and ¥23mn later collected from two further donation drives among staff.

The activities and requirements of the medical institutions in areas that were affected are gradually returning to normal, although GSK is still operating its volunteer programmes. The firm has instituted an “Orange Week”, in which employees who want to participate in recovery efforts are granted five days of paid vacation.

The Japanese arm of the firm has also benefitted from a volunteer programme provided by headquarters in the UK, the first time that it has offered assistance to the Japan branch.

“Many employees from around the world have done a lot of work in less developed countries but, as this was such a big incident, our headquarters offered support through use of their programme”, said Hara. “Using this programme, we sent two employees to the area; one was tasked with coordinating relief efforts with an NGO, while the second volunteer worked for two months at an evacuation centre in Natori”.

Ongoing projects include “Kokoro no Kizuna” (Bonds of the heart). GSK supports the project which provides health consultation services via doctors and specialists at evacuation facilities across the affected region.

And, while recent events have taken the firm’s corporate social responsibility in new directions, GSK has a long history of assisting those who are less well off, both in Japan and around the world.

“As a pharmaceutical company, we are already contributing a great deal to society, since we are able to provide cures and disease prevention for people”, Komatsu said. “On top of that, we support student scholarships and conduct information and study meetings with groups of patients.

“We are also concentrating a great deal of our efforts on devising cures for rare diseases”, he said. “Not many companies are interested in that field due to the hurdles of maintaining a sustainable business, but we at GSK believe we have the responsibility to find cures. Flolan is one example. In Japan, there are only a few hundred people who need that medication and the illness is rare worldwide, but without this medicine, the disease would kill those people”.

Globally, the firm provides medicines and vaccines to people in developing countries who are ordinarily not able to access them, including many free of charge.

Recovery and reconstruction work will continue for several years and locals will continue to require assistance for the foreseeable future, but GSK is committed to applying its corporate motto—“Do more, feel better, live longer”—to that effort.