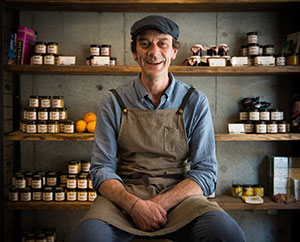 Ian Gibbins, in his shop in Kudanminami, Chiyoda Ward. PHOTO BY ALEXANDER TREVES

To sample the very best food and drink—full of flavour and a richness that is impossible to find in mass-produced, supermarket fare—you need an artisan. Fortunately, the craft food and drink movement is catching on in Japan—with some Britons in the vanguard.

Craft gin and ale, as well as Christmas puddings, mince pies, meat pies and preserves, are being made nationwide by Brits with a taste for the finer things. And not all of them expected to forge a career in the food and drink industry.

Ian Gibbins, for example, qualified as a solicitor in London before moving to Sydney, where he worked as a lawyer and executive producer in the film business. In 2010, “looking for a new adventure”, he moved to Japan. While continuing his film career, he decided to branch out in a decidedly different direction.

“The business started as a hobby”, Bristol-born Gibbins told BCCJ ACUMEN. “I quickly realised there was a lot of interest in British food from Japanese people—but also a lingering negative image.

“It became a goal to show Japanese that British food is not just fish and chips, and that modern British food can rival French, Italian and other cuisine”, he said.

Gibbins launched the Swan & Lion brand in November 2013, initially selling homemade chutneys, pickles and marmalade at weekend farmers’ markets. He then added traditional Christmas puddings and mince pies to the range, before the offerings were expanded to include British cakes and desserts and, subsequently, a range of gourmet meat pies. 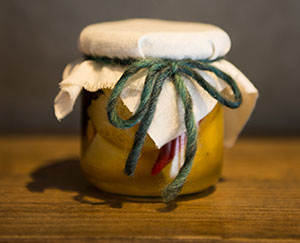 Offerings include homemade chutney and preserves. PHOTO BY ALEXANDER TREVES

Business was so good that Gibbins opened the Swan & Lion British Deli and Bakery in Kudanminami, Chiyoda Ward, in November 2015. The shop offers takeout lunch-sets, meat pies, salads, cakes and a range of jarred products, which now includes the popular lemon curd and brandy butter.

Gibbins insists on using natural ingredients, adding no preservatives or colouring. He uses Japanese meat, vegetables and fruit, and all the butter comes from Hokkaido.

In addition to the shop, he participates in events and food fairs at Mitsukoshi and Isetan department stores, and provides private catering. Fellow British Chamber of Commerce in Japan member Berry Bros. & Rudd is his most regular client. He also teams up with firms such as Party Bus Tokyo to provide food for their customers’ trips around the capital.

The latest addition to the shop’s offerings is a “care package” delivered to expats at their offices.

“The majority of my customers are Japanese—people working in the locality—as well as Swan & Lion fans we have met at markets, department store events and so on, but the expat customer base is growing”, Gibbins said.

And he has significant future plans, such as developing business done via his Internet shop, offering a traditional British breakfast at the deli on Saturday mornings and opening a separate modern British casual dining restaurant.

Gibbins is optimistic about the outlook for offerings that, in the not-too-distant past, were looked at with caution.

“Some people need a nudge when they come across typical British fare”, he conceded. “But a surprising number do understand what British food is”. 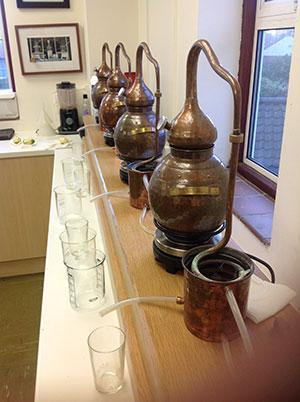 Gin flavours impress
Elsewhere, the Number One Drinks Company Japan was set up in December 2014 by David Croll and Marcin Miller. They have been granted a distilling licence and are developing a gin at what is believed to be Japan’s first artisan gin distillery.

Located in Kyoto, the gin will use local ingredients mixed with British know-how. The first batch is expected to be launched in Japan in October 2016.

Asked the reason he is planning to produce Japan’s first craft gin brand, Croll was as clear as the spirit he so admires.

“First and foremost, all of the partners in the business absolutely love gin”, he told BCCJ ACUMEN.

“We all come from a whisky background, and it’s a little-known fact outside of the industry that most whisky people will start the evening with a G&T”.

Croll has lived in Japan for more than 20 years. He set up Whisk-e Ltd., a firm that imports one of Scotland’s most famous products, and exports some of the finest whiskies produced in Japan.

But he believes that drinkers who enjoy premium-grade spirits can be tempted by something new.
“We believe there is huge potential here, and are already starting to see this with the rise in interest in some of the imported craft gins like Sipsmith”, he said.

Drinkers have, until now, largely been insensitive to brand, simply ordering a gin and tonic or a dry martini, with either gin or vodka. The trick, it seems, will be to educate minds and palates.

A name for the new gin has been selected and is to be announced in August, according to Croll.

The name is expected to be one that has credibility in Gion, while being memorable in drinking establishments from Taipei to Tunbridge Wells to Cape Town and beyond.

“Consumers [in Japan] are just now at the start of a long and fascinating journey to discover the range of flavours and aromas available through the array of newer craft brands: a trend not dissimilar to that seen with craft beers and, more recently, craft sake”, Croll said.

The aim, he added, is to “make the best gin we possibly can—something that will be a match for anything already in the market.

“Having said that, we want to utilise local ingredients as much as that goal allows. For example, with the citrus elements, as well as by looking at imported oranges, lemons and limes, we will evaluate domestic [citrus] fruit like green and yellow yuzu, sudachi, kabosu and hebesu”.

“We have already done some tests at a friendly UK distillery using ingredients sourced in Kyoto, and the results were amazing”, Croll added.

“The dilution water used to take the final gin down from distilled strength to bottling strength will come from a well in Fushimi, Kyoto’s sake-brewing quarter. I really can’t think of a better place to try to produce a high-quality Japanese spirit”.

More than simply creating a new gin, Croll and his team want to “make a product that the people of Kyoto can be proud of and feel is true to the values of their wonderful city”.

And, if Japan’s bar-visiting community catch on to the flavours and some of the 20mn annual visitors from abroad see it as a tasty souvenir to take home, then so much the better.

Before that happens, however, the finishing touches need to be applied: the master distiller arrived in January 2015, the first still is in position and the licence has been granted. Now, the firm is working with a glass business in Osaka to create a distinctive bottle incorporating the embossed distillery logo. Gin test production is to commence in August.

“We are drawing inspiration from the incredible history of Kyoto and its combination of the traditional and the contemporary”, said Croll, who says his favourite use for gin is in the cocktail, Negroni. He did admit, however, that a classic dry martini might be the best way to savour gin’s flavour.

Craft beer appeals
In January 2016, Japan-based brewer Bryan Baird made a trip to Edinburgh to produce a special batch of Rising Sun Pale Ale for the Caledonian Brewery. The finished product was then sold exclusively at pubs in the J D Wetherspoon chain. 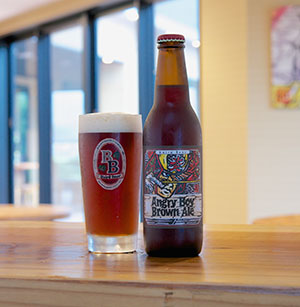 The firm’s ales are popular.

Baird had an early “flirtation” with beer during his university days in the US. Since arriving in Japan in 1989 to teach English, it has blossomed.

“The love affair moved to an even deeper level as I subsequently discovered the distinct and expressive flavours of beers that were being crafted by the passionate artisans of the American microbrewery movement”, he said.

Since then—and despite a number of hurdles along the way—Baird Brewing has evolved into one of the largest craft breweries in Japan, and has earned a reputation for consistently high-quality ale. 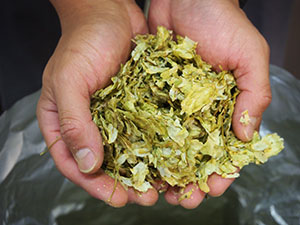 Quality dried hops are used to make the products.

Baird Brewing is also known for its variety, ranging from the snappy 5.5% Numazu Lager and fruity Wheat King Wit to the rich Red Rose Amber Ale and silky-smooth Kurofune Porter.

Growing demand and brand recognition has led to the opening of four additional taprooms, the most recent of which is the Baird Brewery Gardens Shuzenji. Located on the banks of the Kano River in Izu City, Shizuoka Prefecture, it opened in 2014.

Facilities include a tasting room, an outdoor beer deck with spectacular views, gardens and an observation area where visitors can admire the next batch of ale being crafted.