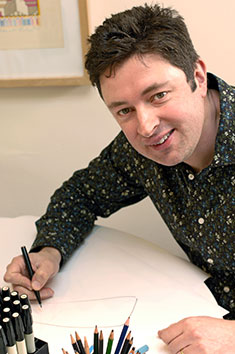 When David Keech joined the musical instrument division of Yamaha Corporation in 2003, he became the first non-Japanese designer to work for the firm. Yamaha was beginning to internationalise its design team and capabilities at the time.


Keech and his young family spent a little over two years in Hamamatsu, Shizuoka Prefecture, before moving back to the UK to start his own design business—Keechdesign UK Ltd. He had a clear vision of one of the key markets in which he wanted to operate.

“Having developed an in-depth knowledge of Japanese design and business culture, as well as a passion for the culture of Japan itself, it was clear to me that supplying British design to Japanese companies would be the unique strength of the business”, Keech said.

Critical to achieving that, he said, are patience and diligence, along with the ability to build strong, long-term relationships. To do that, Keech needs to provide a high-quality service while remaining mindful of Japanese business culture.

“I wouldn’t say it was easy, because the ‘long game’ associated with doing business in Japan can be, in a sense, contradictory to the needs of immediate cash flow in the early days of a new business”, he said.

“Having said that, I believe that my personal passion and interest in Japan, gained from living there, has helped enormously. For example, I practice kendo to this day—and there are few things more Japanese than that!”

Based in Great Portland Street in central London, Keech employs several designers, one of them Japanese, and is able to create tailored design teams from a wide array of backgrounds to tackle various types of projects.

The firm works across a broad platform of disciplines, including product design and interiors. It also conducts research into trends and organises ethnographic and user studies.

As well as continuing his strong working relationship with Yamaha, Keech has forged new ties with Aoki Inc., one of Japan’s largest menswear retailers, and electronics giant Seiko Epson Corp.

The partnership with Epson has become so strong that Keechdesign is now the firm’s primary European design consultancy and was behind the look of the groundbreaking Moverio mobile communications device.

Keech remains appreciative of the support and advice provided by UK Trade & Investment (UKTI) Japan in expanding his footprint in this market. The UKTI team first introduced him to Epson on one of his trips here.

“Having been on several design trade missions to Japan, it is very useful to know where the help is and how to get it, when needed”, he said. “Most of the direct assistance focuses around the missions themselves, which feature very valuable PR created by UKTI, direct hook-ups with interested Japanese potential business partners, and use of the excellent facilities at the British Embassy in Tokyo.

“The UKTI team at the embassy has always been hugely supportive, both on a practical level and also in their ongoing championing of the British design industry”.


The full version of this article can be viewed online at www.exporttojapan.co.uk
Helping UK companies succeed in Japan

More articles in Export To Japan

Working with a local distributor has proved successful for a Bristol-based firm.

A British firm is instilling leadership in Japanese businesses.

Showcasing the Best of British

Top-quality, experienced candidates are increasingly needed for both Japanese and foreign firms.