Three of Princess Diana’s dresses have temporarily returned to the UK after having inspired hundreds of students at Mejiro Fashion & Art College (MFAC) in Tokyo for more than 20 years.

On 26 April, Kensington Palace re-launched its “Diana: Her Fashion Story” exhibit, show­casing the princess’s iconic outfits, including some that have never been shown before. For the occasion, Akihiko Kojima, principal of the MFAC, sent three of Diana’s dresses from Tokyo back to their homeland.

James Kojima, a New York art dealer and Akihiko’s cousin, acquired the three pieces of her couture on Akihiko’s behalf on 25 June, 1997, at Princess Diana’s charity auction in Manhattan, New York, where he was living at the time. The princess gathered nearly 80 of her dresses at Christie’s auction house, and the proceeds were donated to charities supporting the fights against cancer and HIV. The event, attended by more than 1,000 people, was fully booked and had James not been a customer of Christie’s and an art dealer, he would have never had the chance to attend.

The same year happened to be the MFAC’s 60th anniversary, so with direction from an aunt and previous principal, Reiko Kojima, James attended the auction with a mission to send Diana’s dresses to Tokyo.

While James was provided with a list of five or six dresses to bid for, he was informed that three were of particular interest and were worth bidding for to a much higher price than the estimate. Despite the highly competitive nature of the auction, he successfully obtained the most desired dresses. 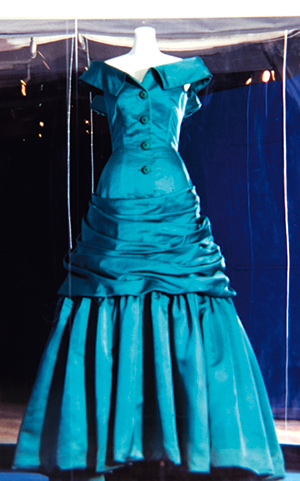 The dresses have been an inspiration to students at Mejiro Fashion & Art College.

While for students the dresses all stand as grand examples of fashion design, Torimaru’s dress is particularly special. Chieko Kojima, Akihiko’s wife and faculty member of the MFAC, said, “I picked this one because it is evidence of UK–Japan friendship … when the [Japanese] media wants to talk about Diana, this is the most famous dress because of its Japanese designer.”

Torimaru came to be the designer of Princess Diana’s dress through a good friend who knew of the princess and knew about her visit to Japan in 1986. The designer proceeded to create a dress for Diana, and presented it to her in red, blue and white, out of which she chose blue.

Chieko recollected that, in his design, Torimaru expressed consideration for Diana’s preference for generous coverage in clothing.

During her time in Japan in May 1986, Torimaru kept an eye out for the Princess of Wales appear­ing in his dress. When the visit was passing by without her appearing in the dress, the designer assumed she had had a change of heart about his design. But to his surprise and glee, she had saved the outfit for the final and most special engagement: a banquet with Emperor Hirohito.

In the months following Diana’s death in August 1997, the dresses and their story were shared in exhibitions, TV programmes and papers such as Nikkan Sports, Sunday Mainichi, and Asahi Shimbun. The following October, the story was featured by Fuji TV and TV Asahi. In December 2006, TV Tokyo dedicated a two-hour special to Diana. To this day, Diana’s story is relevant and significant to Japanese people, and continues to be featured on TV programmes.

A number of Diana’s dresses were auctioned in 1997.

Optimal conditions
Since Diana’s death, the Kojima family has taken even better care of the dresses and paid special attention to the lending and displaying of the pieces.

According to Akihiko, the dresses are displayed on the first day of school and on 10-year anniversaries for students to admire, but are normally kept in a climate-controlled room. While “media, designers and teachers at national art uni­versities” commonly request to view or even borrow the treasures, the value of the dresses makes their keepers selective about the kind of interaction the items encounter, to preserve their optimal conditions.

However, when Kensington Palace contacted principal Kojima about borrowing the dresses for “Diana: Her Fashion Story”, he was more than happy to send them over. “Kensington Palace is used to this kind of thing. They wouldn’t let anybody wear it”, he said, expressing his trust in the expertise of the Royal Palace and in its returning the dresses with the colouring, beading and condition just as when the dresses had been sent.

The principal, who spent five years growing up in London, added, “I also feel special about it spiritually, how the dresses she once wore are back in England and facing British people.”

James agreed: “This is something she wore and this is the closest you can get to the person.” He said that any kind of tie between the UK and Japan, such as Diana’s three dresses, is valuable for maintaining the cross-cultural relationship.

The family’s extensive efforts to care for the dresses also reflects on the great impact that Princess Diana had on Japanese people and on their hopes to pass her legacy on to the next generation. “I think that all the generations like myself or older might be inspired by Princess Diana”, Akihiko said.

James added that Diana was well respected for selling her dresses to raise money for charity, and that the image of her visiting African mine­fields in protective vest and headgear had cemented her status as an icon for his generation.

The exhibition is being held at Kensington Palace, London. The palace is open daily (except 24-26 December). Entry costs £19.50 for adults and £9.70 for children. 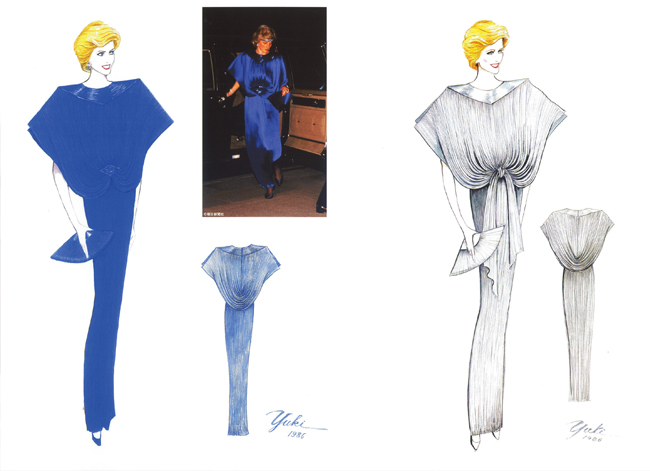 This dress was worn by Princess Diana to a banquet with Emperor Hirohito.