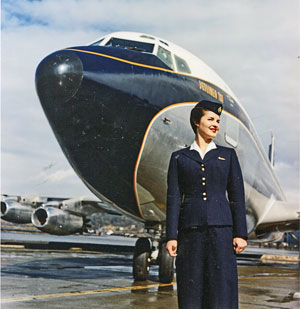 During the 1960s, BA staff wore uniforms designed by the dressmaker to Queen Elizabeth II.

While air travel today is often felt to be more drudgery than luxury, in the 1960s it was a notably upscale experience. Think Champagne on tap, delicate crudités, caviar, oysters and personal service, something that was no doubt helped by the fact fewer people were able to take to the skies at that time.

Right in the middle of this, from 1960 to 1969, was Hilary Derouet, née Farish, an air stewardess for the British Overseas Airways Corporation (BOAC), one of the two forerunners of British Airways (BA). And decades later she has left her mark on the industry. Inspired by Farish’s suitcase, British brand Globe-Trotter has launched a new spring–summer 2017 collection, which is available in Japan.

“My only, unwitting contribution was to stick the hotel labels from around the world on the inside of the lid of my Globe-Trotter”, Farish told BCCJ ACUMEN.

Having given the suitcase to the BOAC Heritage Centre at Heathrow after 50 years in her loft, Farish did not expect it to attract much attention. But it was soon noticed by Globe-Trotter designer Charlotte Seddon. “It was she who made it the amazing story it has become”, Farish said.

The suitcase’s interior is covered in vintage and classic hotel and resort labels and stickers from her globetrotting days working for BOAC, including those from Tokyo, Rio de Janeiro, Buenos Aires, Singapore, Rome, Beirut, Honolulu and New York. Unlike others, she put these on the inside of her suitcase, ensuring they were well preserved.

“There were only two flights a week to the Far East and the flight was in sectors—nothing direct—and the crew changed at nearly each stop”, she said.

It is no wonder then that Farish developed such a collection of hotel stickers, as stays of three to four days were commonplace.

“The BOAC saying was that flying ‘is a good way to get from one party to the next’”, she added.

Hilary Farish and a colleague at Haneda Airport during the 1960s. Farish had given her suitcase to the BOAC Heritage Centre at Heathrow.

With a collection of more than 50 travel stickers from around the globe, the bright and colourful inside of the suitcase contrasts neatly with the simple and unassuming exterior design of Globe-Trotter suitcases from the 1960s.


“As soon as I received Hilary’s and opened it up it was just full of personality, glamour, colour and excitement”, Seddon said, recalling when she received the suitcase from the BOAC archive, which has cases from the 1960s, ’70s and ’80s, all with a similar exterior.

“It’s like something maybe we would have tried to create if we wanted to make a story, but the story was already there, so it was just such a lovely starting point for us”, Seddon explained.

First class
Moran Birger, regional general manager for BA in Japan explained that the airline embraced the luxury of travel during the 1960s and has a variety of ways to maintain that heritage today.

“Spacious cabins, haute cuisine, fine wine and smartly dressed cabin crew to serve on board for the first time all contributed to adding a touch of glamour to the travel industry”, he said, describing the BOAC offering in the 1960s.

The airline also introduced the first flat beds and lounges on board the trans-Atlantic Monarch Service on Boeing Stratocruisers. Today, Birger explained, the airline continues to adjust to the needs of travellers. In particular, the 787-9 Dreamliner “offers an integrated LED mood-lighting system that reflects daylight and night time brightness and helps passengers adjust to different time-zones.

“Customers flying the 787-9 will notice an increased amount of oxygen and moisture in the cabin air, which help to reduce the effects of jet-lag and dry eyes”, he said. 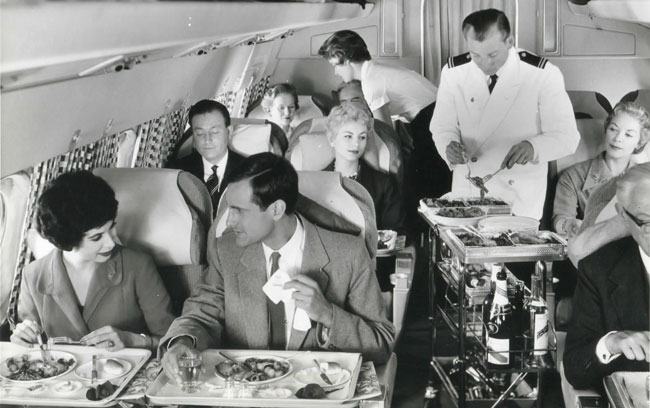 Air travel in the 1960s was a famously luxurious experience.

All of these adjustments are in keeping with passenger demands for what Birger calls “wellness travel”, something that is evermore important with business executives frequently jetting off to various company headquarters.

In addition, Birger suggested, “Technology has transformed the aviation industry by responding to travellers’ greater demand for convenience and choice”, referencing easy check-in via the British Airways app.

Reminiscing about travel in the 1960s, Farish described the time as “the Golden Age of Flying after the austerity of the 1950s”.

However, she said it was a very different time for air stewardesses, too. “Only 2% of applicants were accepted in 1960 to become BOAC stewardesses. We could only fly for 10 years, could not be married and had no seniority”. “All grades of stewards were above us, which was fine, as we did not know any better in those days”, she said.

Despite this, the job was still a glamorous one, and Farish recalls feeling very special at the time.

The uniforms added to this, said Birger, explaining that BA continues to pride itself on dressing crew in the best uniforms, and that “British Airways has continued to dress its cabin crew in uniforms designed by some of the leading designers of their time”. 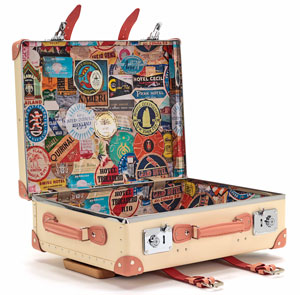 Packing
In the 1960s, Globe-Trotter was the suitcase of choice for BOAC crew, and Farish suggested they were the “strongest cases on the market”. Which they needed to be.

“Our trips were three and a half weeks long, going round the world, so we needed summer and winter clothes. With all the shopping the stewardesses did, the cases became very heavy and, of course, we did not have wheels”, she said.

With a 120-year history, Farish believes Globe-Trotter has remained true to its basic concept while at the same time “bringing modern design and a range of accessories to complement the range of colours and shapes of their suitcases”.

And with the new range, Globe-Trotter did not stop at suitcases.

“Some of the pieces that I designed, I’ve literally taken some of the stickers themselves and [applied] them onto items such as passport covers, bags, scarves and accessories”, Seddon explained.

Along with the range of accessories, the collection includes suitcases for ¥210,000 and mini trotter cases at ¥126,000 (plus tax), both of which are on sale at stores in Tokyo.

For Seddon, it was a different kind of project and one that touches on both the old and the new.

“This project in particular is really special to me, because working as a designer you might have to create a theme, whereas with this project I found something that’s been put together by Hilary Farish, who is really fun, has impeccable taste and I’ve been able to transform that into new, modern day products”.