Determined as ever to promote the Fashion is GREAT campaign, the British Embassy Tokyo hosted a women’s fashion showcase of UK designers for members of the fashion industry and the media. The 1 February showing of the collection—creations offered by the 19 participating designers—represented but a few of the many British brands available in Tokyo.

BCCJ ACUMEN spoke to Kae Miyazawa, senior trade advisor for consumer and retail at the embassy, who explained that the show was triggered by a survey taken last year of 1,000 Japanese female consumers—including those in their teens through to those in their 40s—to understand the perception of British women’s fashion.

“The survey showed that British women’s fashion was still not fully understood in terms of features and the diversity on offer from luxury items to affordable, yet edgy high-street fashion”, she said.

Best of British
While three rooms of the Ambassador’s Residence showcased the best of the brands’ products, models strutted the hallways as guests sipped sparkling wine and marvelled at the glamour and quality.

Although identifiably British, the clothing had a Japanese twist designed to appeal to the discerning Japan market. As a representative of Hunter’s explained, designs loved by the British—such as a typical pair of Wellington boots—need to be adjusted to suit Japanese tastes.

The sentiment was echoed by other brands. Fred Perry, which has its largest shop in the capital’s Omotesando district, had some Tokyo limited editions on display. Here the twist on British women’s fashion was noticeable: more loosely draped skirts and fewer sporty designs.

Miyazawa noted that patience, good relationships and staying true to your brand—all the while listening to your customer—are key in the Japan market.

“There are some particular issues with the Japanese market, such as quality and sizing”, she said. “I suggest you listen to what the Japan side tells you, but not to try doing everything as you may lose your originality”.

Originating in a small Suffolk village, outfitter Lavenham creates jackets that convey a quintessential British country feeling. The firm’s roots are in the manufacture of horse blankets, some of which have been designed for use by the reigning monarch. It was not long before the makers recognised the need for light, durable, heat-retaining coats, some of which were on show at the embassy. Meanwhile, Daks, founded in 1894 and currently owned by Sankyo Seiko Co., Ltd., provided some of its neutral-toned clothes and high-end accessories to entice buyers. 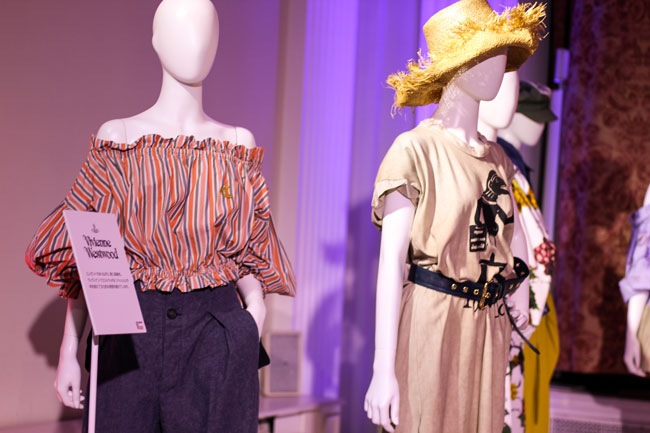 Also taking pride of place were some pieces of distinctly British jewellery. These included Alex Monroe’s Beauty and the Beast-themed items and Backes & Strauss glittering, classic timepieces. Then, standing out from the colourful leather items on display were several Radley London Handbags, each with their signature dog logo.

Belstaff—maker of leather jackets and one of the first firms to use waxed cotton to make waterproof apparel for motorcyclists—displayed some of its jackets, which proved that, even in fashionable Tokyo, British designs need not forfeit their edgy look. And for those who might wish to brave the elements with style, Mackintosh provided a selection of coats.

The presentation would not have been complete without Japan favourites Vivienne Westwood, Burberry, high street brand AllSaints, Ted Baker and accessories by designer Anya Hindmarch. There were also items by Aquascutum (which has proudly dressed the likes of former Prime Ministers Margaret Thatcher and John Major KG CH), Gloverall, GOAT and Robinson Pelham.

Private view
“The event was a great success showcasing the latest collections of 19 leading British fashion brands to more than 150 high-profile business and celebrity guests”, said Miyazawa. “The event received great media coverage from the Nikkei and WWD Japan, and began to generate a buzz on social media through the invited influencers sharing their live experience of the showcase”.

In addition, the showcase was filmed in 360 degrees by the British firm 360events.

“This content will be launched on 20 and 21 March to a consumer audience at Shibuya Hikarie 8F COURT as part of Amazon Fashion Week Tokyo, giving the public the chance to experience the event themselves and buy the products online”, she added.