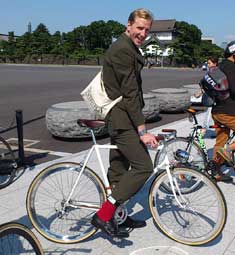 Originally founded in the UK, the “home of tweed”, the outing celebrate the traditional British fabric, with local sponsors such as The Woolmark Company, United Arrows Ltd and Virgin Atlantic.

This year’s route started in Kita-Aoyama and traversed the Minato, Chiyoda and Chuo wards before finishing at Ginza’s Mitsukoshi department store, another patron of the event. Nagoya hosted its own Tweed Run on 26 October.

Combining cold-weather fashion with cycling, the Tweed Run began in 2009 in London.

The ride through the “fashionable heart” of the city was designed to coincide with Mercedes-Benz Fashion Week Tokyo, which ran from 14 to 19 October. Prizes for the best-dressed participants, were distributed after the race.

Here, the organisers said, bicycles are part of daily commuting, but many cyclists shirk traffic rules and regulations. Thus, in addition to promoting tweed fashion, the annual ride aims to foster cycling safety and the culture of bicycles.

Japan is reportedly the largest market for tweed, particularly authentic Harris Tweed. As a result, several local designers have incorporated the fabric into their lines to make exceptional pieces.

Christopher Raeburn is a UK-based fashion designer who participated in the event.

“The Tokyo Tweed Run is a fantastic initiative, a chance to celebrate British heritage, craft and provenance. It’s an amazing opportunity to see Tokyo in a unique fashion. The Japanese were very welcoming, particularly our host Kurino-san from United Arrows”, he said.

Tweed runs are currently held in other cities across the US, Canada and Australia.