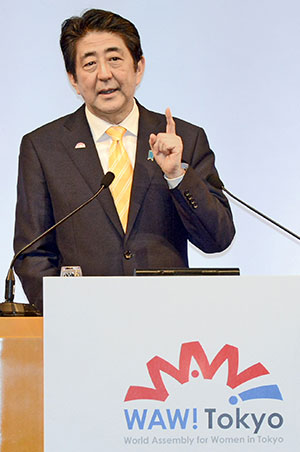 “Abenomics is Womenomics”, Prime Minister Shinzo Abe told delegates of WAW! 2015, the second World Assembly for Women in Tokyo. Opening the two-day government-hosted forum on 28 August, Abe pointed out his work to promote the engagement of women and how those efforts have borne fruit.

Not least is a new bill—enacted on the same day—to encourage and inspire women to return to, and stay in, employment.

“From April 2016, companies will be required to draw up and announce voluntary action plans incorporating numerical targets for promoting the hiring of women and the appointment of women to executive positions”, Abe said. “The national government and local authorities will also draw up action plans”.

According to Abe, placing more women in positions that have decision-making authority, together with changing long—and often firmly-held—mindsets on gender roles will help realise social reform.

“Husbands will actively take childcare leave and couples will share responsibility for household chores and child rearing”, he said. “We will make this ordinary practice in Japan”.

Yet, with a corporate culture that tends to value presenteeism and hierarchy more highly than efficiency and results, creating a work environment that gives both men and women a work–life balance will not be easy.

Given that it is a global challenge, Abe is keen to increasingly learn from abroad, particularly from northern European countries that have been “superbly successful at reconciling economic growth and rising birth rates under the banner of active participation by women”.

While WAW! 2014 attracted more than 100 people from 26 countries and six international organisations, this year’s assembly drew some 150 people from more than 40 countries and eight international organisations. Participants were asked to help deliver three goals: to consider proposals to create an ideal global society; to discuss and transmit messages to the world; and to network beyond gender and borders. 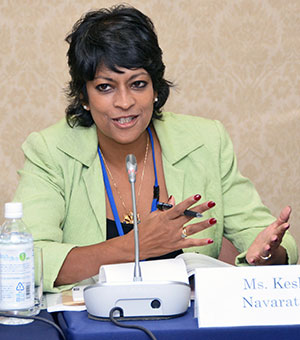 Keshini Navaratnam spoke in one of the sessions.

Among the international experts who contributed in the sessions, held under the themes of “Women and Economy” and “Global Challenges”, were Cherie Blair QC CBE, founder of the Cherie Blair Foundation for Women, and former BBC World TV news anchor Keshini Navaratnam. Navaratnam welcomed Abe’s work to demonstrate how the empowerment of women is directly linked to not only the growth of Japan’s economy, but also that of the world.

“His emphasis on public- and private-sector collaboration in harnessing the strength of all the population shows great vision”, she told BCCJ ACUMEN. “It has inspired men and women across the globe”.

With the goal of providing further inspiration, a new website called Women Will has been launched. Designed to promote WAW! 2015, it features wide-ranging practical ideas, contributed by members of the public, on how to make working women happy. These include equal distribution—among mothers and fathers—of attendance at school events, applying management skills gained from child raising to work and creating a positive work environment by reaching out to help others.

“The final curtain has been drawn on the era in which people ask why we promote the dynamic engagement of women in society”, said Abe. “Now is the time for us to discuss how to bring it into reality”.