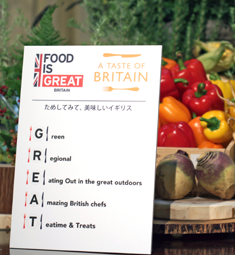 The British Embassy Tokyo launched the Food is Great campaign on 28 August at the ambassador’s residence.

For many years, British cuisine has had a reputation for being, if we’re completely honest, something of a joke.

But our critics increasingly are becoming silent.

The Great Britain edition of the Michelin Guide 2013 awarded stars to 138 establishments across the country, including 60 in London, while the editor of the foodies’ bible warned that London is close to overtaking Paris and New York for starred restaurants.

Anyone who has spent time in the UK recently will agree that huge strides have been made across the board in the quality of food being served.

The task is to get this message across to more people, so they can go to the UK without fearing that they will find something unrecognisable and inedible on their plate. This would also give British firms that produce quality food access to the market here in Japan.

To help achieve the second of these aims, the trade team at the British Embassy Tokyo recently launched the Food is GREAT: A Taste of Britain campaign, which aims to bring together UK firms with clients in Japan.

The campaign includes a number of events at which Japanese consumers can experience English food and drink. Partners include retailers, hotels, cooking schools, recipe websites and firms that produce cooking programmes.

“We are helping about 240 companies in the food and drink sector that want to come to Japan, and those numbers are increasing”, Mariko Hasegawa of UK Trade & Investment (UKTI) told BCCJ ACUMEN.

“[UKTI is] trying to set out various platforms for UK companies to introduce their products and to create opportunities to enter the market here, as well as helping others to expand their business”, Hasegawa said. 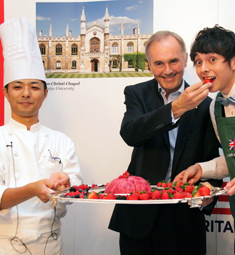 The 2012 London Olympic and Paralympic Games and the birth of Prince George have piqued interest among Japanese consumers, while the trustworthiness of Japanese partner firms is seen as a big plus for British firms.


There have already been some notable successes, such as Westaways Sausages Limited. Based in the West Country, the firm signed a contract earlier this year to supply Japan with up to three tons of sausages every month.

“Japan is traditionally a difficult market for selling sausages”, owner Charles Baughan told the Western Daily Press. “[Japanese] are very protectionist, very suspicious about foreign food, but we managed to get our products in there”.

Westaways is the only European meat firm to get a foothold in Japan and is now in talks with a major Japanese producer about a contract that could be worth £1mn per year to the Devon firm.

“[UKTI] have a tremendous number of schemes that you can use, as well as a trade show access programme that gives you one long-distance flight per year”, Baughan said.

“The continuing emergence of Britain and the Union Jack as a recognisable symbol, the quality of the products and their uniqueness have all helped with this increase”, said Simon Thomas, manager of the Kobe branch of Hobgoblin British pubs.

Thomas is delighted that the UK is slowly managing to distance itself from the image of “greasy, tasteless food served up with warm beer”.

“I’d be lying if I said all British restaurants are great now, but the range and quality of the products have improved as the population’s tastes have clamoured for more”, he said.

“To cook British food well is an art. And with the introduction of guest beers in many pubs, brewers have to be diligent in their production and careful of their product”.

David Croll, chief executive of Whisk-e Ltd., agrees British food and drink has “laboured under a certain stereotype for a long time”. However, he believes his business is benefitting from a number of factors fuelling growing appreciation of our culinary heritage.

According to Croll, these include travellers to the UK having a better-than-expected experience; an explosion in the number of small artisan producers with niche, high-quality products that appeal to the Japanese palate; and the combined efforts of UK exporters, Japanese importers and various trade promotion bodies to make more of the products available here, ensuring they are showcased in a suitable fashion.

Croll has seen a sharp increase in demand for his niche products since the turn of the year.
“There are any number of boxes that must be ticked, including, for example, pricing, flavour, packaging, provenance and back story”, he said.

“Then there’s the sometimes-not-insignificant factor of the Ministry of Health, Labour and Welfare—one of our soft drink products took two-and-a-half years to gain approval—and, finally, the complicated distribution system.

“[Japan] is not a market for the faint-hearted or those lacking will, determination and buckets of patience. But, if all of this can be got right, it offers tremendous opportunities”, he said.

“I think it is vitally important to associate well-known British brands in a push to impress the Japanese people”, Drewery said.

“Having worked in the food and beverage business in Japan, I am well used to the blinkered view we have here of food in Britain.

“Changing perceptions is difficult without spending millions of yen in the media, but I truly believe that word of mouth is the most powerful tool in Japan today”.

Drewery advocates opening a number of small delis in central locations that sell the very best British produce to make “a big splash”. He believes a well-known name, such as Fortnum & Mason or Jamie Oliver, would help the campaign.

“A great British deli in Shibuya would help us to target the young people, and one in Ginza would certainly help the perception of the high-net-worth individuals who shop in the area [and] who would be the market to hit for potential tourism to the UK”.

And it is this sector on which VisitBritain has set its sights. “Curiosity about British food and drink has increased as famous British chefs become known here—Jamie Oliver, Gordon Ramsay, Heston Blumenthal”, said Katsue Takeshima, public relations manager at VisitBritain.

“Since the food scene in the UK started to change, we have promoted modern British cuisine and high-quality gastro pub food”, Takeshima said.

“Many Japanese visitors have started to travel to areas beyond London and have come back with good experiences of local and seasonal food”.

“The stereotype about British food is simply not deserved today”.