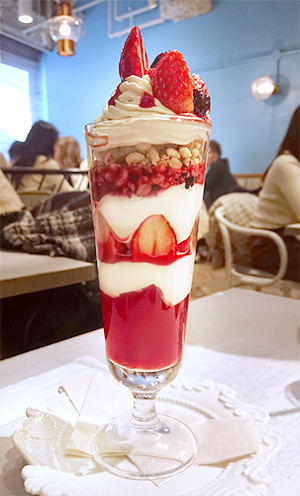 Famous for tofu and vegetable dishes, Japan is a country you might expect to be rich in options free of meat and dairy. But for vegetarians and vegans arriving as a result of Prime Minister Shinzo Abe’s tourism push, which aims for 40 million visitors per year by 2020, the culinary landscape might be difficult to navigate.

In reality, Japan is a nation hooked on meat—as excitement over the lifting of the 23-year ban on British beef and lamb shows. But as people around the globe start to move away from consuming meat—whether for health reasons, concern about the ethical treatment of animals or to reduce their environmental footprint, the number of visitors arriving in Japan with specific dietary needs will only increase. Can the country keep up?

To get a feel for the current situation, shifting attitudes and growing trends in Japan’s food industry, ACUMEN spoke with food-related businesses in Tokyo.

The practice of vegetarianism dates back to at least the first century BC. Surprisingly, so has veganism. Although the term itself is fairly new—coined by Donald Watson in 1944, when he founded The Vegan Society in Birmingham, England—there is evidence of the practice dating back more than 2,000 years. A key difference between vegetarians and vegans is that the latter strictly avoid all animal and dairy products.

A variety of studies have shown the health bene­fits that come with eating a plant-based diet, and the negative impact the agricultural industry has on the environment is a determining factor in the lifestyle choices of many people. 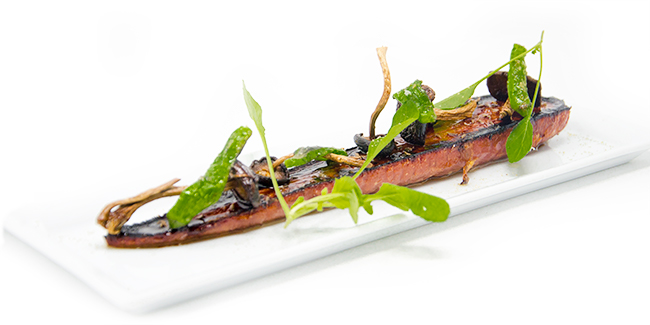 Animal husbandry is a proven contributor to climate change. The Food and Agriculture Organi­za­tion (FAO) of the United Nations esti­mates that raising live­stock for meat, eggs and milk accounts for 14.5% of human-generated green­­house gas emissions and uses about 70% of land suitable for agri­culture. This has led many people to adopt vegetarian, vegan or organic food life­styles as a way of reducing their personal carbon footprint.

Mie Project Co., Ltd. is a British Chamber of Com­merce in Japan member firm that imports organic food and drink products to Japan. Repre­sen­ting 21 brands from nine countries, the firm distri­­butes some 200 products to a broad spec­trum of retail and food service customers throughout the country.

One example is Provamel, a line of plant-based milks and desserts made from ingredients such as coconuts, hazelnuts, cashews, almonds and oats. The brand is produced by Belgian food maker Alpro, which introduced the UK’s first soya-based yoghurt in 2008.

The driving goal of Mie Project Co., Ltd. is to encourage conversation around sustainable, healthy, organic food and to contribute to sustaina­ble development and social responsibility.

Upcoming events such as the Rugby World Cup 2019 and the Tokyo 2020 Olympic and Paralympic Games, are expected to bring a sharp increase in inbound tourism. For vegetarian and vegan visitors, the stay in Japan could be a dietary dilemma.

Foodie Tours Japan, a Tokyo-based firm that offers food-focused walking tours, introduces tourists to vegan, vegetarian, Muslim-friendly and gluten-free options in English or German. Owner-operator Gizem Sakamaki explained the struggle that vegans and vegetarians face while in Japan. “A huge hurdle for tourists who are vegans or vegetarians is that Japanese foods tend to be sprinkled with meat or fish in many sneaky ways. For example, katsuo-bushi [flakes of dried bonito, a fish related to tuna] is used to season many soups and rice or noodle dishes. This makes it extremely difficult to find food without it”.

Abby Hall, a Foodie Tours Japan staff member and blogger from the UK, has been vegan for six years—a move she made after being raised vegetarian. She described her struggle to adhere to the diet in Japan. “Milk protein and its derivatives can be difficult to avoid here. I can go to an ice cream shop and order a soy-milk ice cream only to find out that there is cow’s milk in it, with just a soy base”.

This lack of understanding is common in Japan, and many people do not understand that vegans do not consume any form of animal product.

Sorting through the options that do exist can be difficult for tourists due to the language barrier. “Unlike in the US and UK, or in Australia or Europe, there are no easy labels that state if food is vegan or vegetarian. I think this stems from the root problem that—until very recently—veganism was basically an unknown topic in Japan,” said Jackie Jansen, head coordinator of the vegan tour team at Foodie Tours Japan.

The firm helps solve this problem by provi­ding helpful phrases in Japanese and tips on what visitors should be asking for in restaurants to ensure that what they are eating is vegan.

“We also take them into a convenience store and show them particular kanji—such as those which indicate meat, egg, dairy or fish—to look for on packages. Lastly, I point out some delicious Japanese foods that can easily be made vegan, as well as many vegan hotspots that we walk by on our tour”. 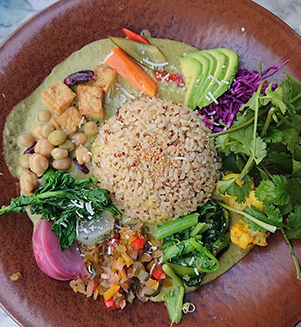 While Japan’s culinary landscape is far from friendly for those wishing to avoid animal products, progress is being made. HappyCow, a smart­phone app designed to help vegans and vegetarians find suitable dining establishments, lists 1,552 vegetarian and vegan restaurants in Japan, 445 of which are in Tokyo.

Hall mentioned the app, which has been down­loaded more than a million times, as a useful source of informa­tion and recommends that any incoming tourists add it to their list of resources when plan­ning their trip. “As long as you think ahead, you’ll be fine and you will enjoy the delicious food that Japan has to offer”.

Meat-free options can also be found in unex­pect­ed places. ECN Hospitality operates a number of restaurants in Tokyo, including Ruby Jack’s Steakhouse & Bar, Septième Brasserie & Bar, and Two Rooms Grill|Bar, the last of which offers a seasonal vegetarian tasting menu.

Matthew Crabbe, Two Rooms founding partner and chef director, explained what inspired him to create a vegetarian menu. “I saw a trend towards vege­tarianism and thought it would be nice to make those guests feel comfortable. Plus, there are so many options in Japan as far as produce is concerned. I thought it would be interesting to explore this growing movement—and Japan has always had a strong vegetarian element to its cuisine”. He added that the vegetarian options at Two Rooms are quite popular, mainly with tourists.

Hall mentioned the growth she has noticed in the five years since she arrived in Japan for a year of study at Keio University while working on her under­graduate degree at Cardiff University in Wales. “Convenience stores in Tokyo and Kyoto now sell vegan ramen, the number of vegan restaurants and cafés has grown dramatically and more every­­day establish­ments are increasing their vegan options,” she said. “TV shows about veganism have aired in relation to how Japan will cope with the influx of vegans and vegetarians during the 2020 Olympics, and I don’t doubt that this is one of the major driving forces of Japan’s vegan movement right now”.

Hall compared her experience in Japan with her life in the UK as she spoke enthusiastically about the variety on the market in Britain. “As far as the availability and widespread knowledge of veganism, the UK has Japan beat by a long shot,” she said.

“The stereotypical idea that vegans only eat salads—and are unhealthy as a result—has led to a vegan-junk-food boom in the UK,” she explained. “Businesses are trying to promote veganism by proving that vegans can eat just as much as non-vegans. I do believe that this is part of a positive transition, but it is very different to the options available here in Tokyo”.

As we wrapped up our talk with Crabbe, he looked to the future of his restaurant. “The life choice of vegetarianism tends to be more common in countries other than Japan. We will see what our guests demands are and take it from there. But with so many different types of produce in Japan, expanding our vegetarian options is most definitely on the cards”.