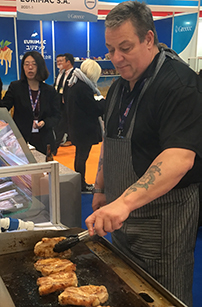 Tender and tasty British pork was served at Foodex.

Combined, the scent of tender British pork on the grill, the subtle yet refreshing tang of mints and the sound of whiskies, gins and beers being poured proved irresistible to visitors at Foodex Japan 2018, with UK exhibitors busy making contacts that—hopefully—will have led to deals throughout the event’s four-day run at the Makuhari Messe convention centre in mid-March.

Eleven UK-based food and drink makers displayed their wares at the event, the largest of its kind in Asia. Alongside were a similar number of Scottish firms on the neighbouring pavilion. Of the UK firms, five were taking part in the event for the first time, and had high expectations of making inroads into the Japanese market.

“This is a completely new experience for us because we have never done exports to Asia by ourselves before, but we do see Japan as potentially a very large and important market for us”, said Antony Keeble, founder of London-based Boggle Confectionery Ltd., which makes Boggle Mints.

“We only launched the brand in 2017, but the mints are already available in Spain, Dubai and China, and we are constantly looking at other possibilities”, he told BCCJ ACUMEN.

Even though the mints are manufactured in the UK—to a recipe that is gluten-free and suitable for vegetarians—Keeble says the products cannot be found on the shelves of British shops, primarily because of consumers’ objections to the price point for a premium product. That is not, however, an issue in other markets, he said.

“From our research, it looks very much as if the middle class in Japan is expanding and there is a growing elderly population, which fits with our product perfectly, because these are adult sweets rather than those aimed at children”, he said. 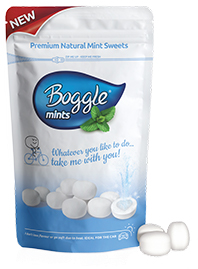 Boggle Mints previously has attracted attention from distributors in South Korea and Taiwan, and Keeble was looking forward to striking a similar arrangement with a Japanese business that has a firm grasp on the likes and dislikes of consumers here.

“It has quickly become clear that quality is a very high priority among the Japanese, but that is important to us as well, while a lot of the people we have been speaking to seem to like the fact that we are a family business and I operate with my wife”, he added.

Boggle mints are designed not to melt—which has helped their popularity in southern Europe and the Middle East—and are served by restaurants after meals and in the first-class cabins of airlines. And after seeing the prevalence of vending machines in Japan, Keeble has set his sights on exploiting a new sales route for his mints.

Jonathan Eckley, senior export manager for the Warwickshire-based Agriculture and Horticulture Development Board, was attending his third Foodex and emphasised the importance of an event with regional reach beyond Japan.

“It is important that we are here and we are pleased with the access that our pork products already have in Japan, although we are always keen to build on that”, he said.

Echoing the comments of other exhibitors, Eckley said quality and reliability are key concerns for potential Japanese partners, with British pork developing a reputation as a high-quality export.

“The UK punches above its weight in terms of protein exports, but we can always do more and we want to emphasise to Japanese consumers that we produce a quality product”, he said.

There is also growing optimism that British beef soon will be available again in Japan, Eckley said. That day “is inching closer”. His confidence rests on a whole series of stringent safety requirements that have been introduced in the UK since the BSE crisis hit the beef industry.

“Our standards from farm to fork are very high now and are independently audited to ensure those standards remain high. But we need to get that message out, and Japan is a key target for us going forward”, he said.

Japan will never be a large market in terms of volume, according to Eckley, although there are some prime British beef cuts that rival the best around the world and would be popular among, for example, those who enjoy Japanese wagyu beef.

“We need to add value to our exports in the same way that Japanese beef farmers have done, and we are aiming to get across that we produce beef with a fantastic taste because it is grass fed, not grain fed, and because the livestock are able to forage, which helps to give the meat a great flavour”.

Building trust
Along with assurances concerning quality, Martin Golding, regional director for Asia and the Americas for Tudor Rose International Limited, said it is necessary to build trust and a solid working relationship with a Japanese partner to succeed in this market.

“The Japanese people that we have been speaking with are, perhaps, a little more cautious than in other markets. They like to conduct their own research and learn about a firm that they are considering partnering with, rather than simply jumping in”, he said. “That can be a bit frustrating at times, but we just have to accept that is the way it is done here and look at that as an investment for the longer term”.

On the shelf
Marcus Pickering, founder and director of Pickering’s Gin, was also testing the waters in Japan with a tipple that is enjoying renewed popularity around the world.

“Gin is in around the world right now, and we can see that it is definitely growing in popularity here in Japan as well”, he said. “More cocktails are made with gin than any other spirit and a good degree of its popularity is a result of that versatility, but also the ‘cleanness’ of the drink”.

Pickering’s Gin is already selling well in North America, he said, while a number of big retailers in Japan have expressed an interest in having it on their shelves.

“I would say that gin drinking here is like it was in the UK four years ago, and we could very well be about to see sales take off here”, he added. 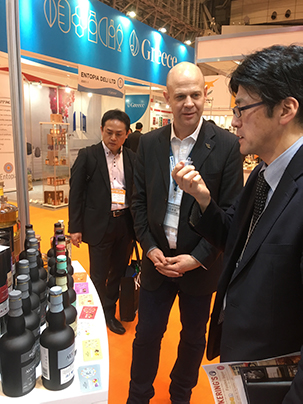 Whisky, on the other hand, has always had a devoted clientele in Japan, so one trick to raising the profile of a new arrival is to give it a unique and fascinating back story, believes Ken Rose, a founding partner in Crucial Drinks.

“In the past 100 years, more than half of Scotland’s distilleries have closed down and we have lost some excellent whiskies”, he said. “And that is a tragedy”.

Crucial Drinks was set up five years ago to carry out research into these “lost” distilleries, identifying the water they used, the source of the grain and even the barrels that the Scotch was aged in. And when the firm’s experts had identified the DNA of the whisky, as Rose described it, they then set about recreating the drink by blending existing single malt whiskies.

The result is resurrected Scotches such as Gerston, which has a peaty and oily flavour, along with Lossit, Jericho and Stratheden.

“We have a rich history with these whiskies and we know that the Japanese love brands with heritage and a back story”, he said. “And the reactions we have had from distributors across Asia so far has been very positive, so we hope to get the same sort of reaction in Japan”.