It’s not every day that some of the top chefs from Tokyo’s most celebrated restaurants are brought together to cook a sumptuous seven-course meal. But on 22 February just that happened at the British Embassy Tokyo, when chefs from Nobu, The White Fox, Kamogawa Grand Hotel’s The Gunjo Restaurant and the embassy staff joined forces for “The Dinner”, an event co-hosted by Paul Madden, UK Ambassador to Japan, and Christophe Ranchoux, president of Waterford Wedgwood Japan Limited.

The dinner began with expertly prepared canapés of poppy seed macaroons—just the right amount of chewiness and crunchiness—with smoked trout and wasabi, strong goat’s cheesecake with red onions, as well as densely flavoured goose and chestnut chipolatas prepared by Tanya Casson, a trained chef and wife of the embassy’s defence attaché. Guests mingled and chatted, sipped expressive and fruity wine provided by Berry Bros. & Rudd and admired the beautiful Wedgwood tableware on display. 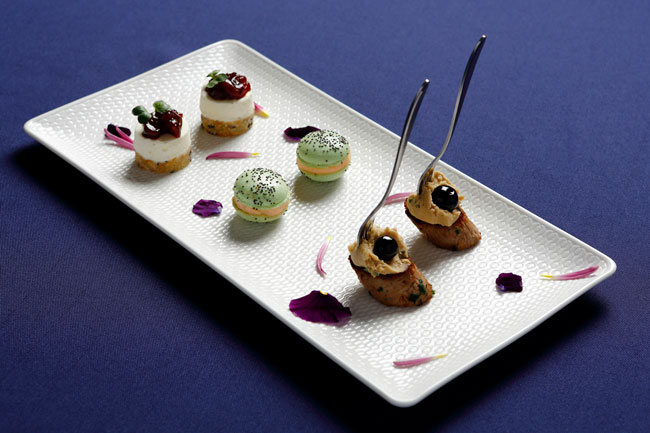 After guests had taken their seats, TV presenter and the embassy’s Food is GREAT Ambassador Harry Sugiyama, emblazoned in his signature Union Flag jacket, introduced the dishes. The first was an early spring carbonara prepared by Shusei Yogi, an embassy chef, served on a delightful plate featuring exotic Far Eastern flowers drawn in an 18th century style, the green colours complementing the fresh look and taste of the vegetables. 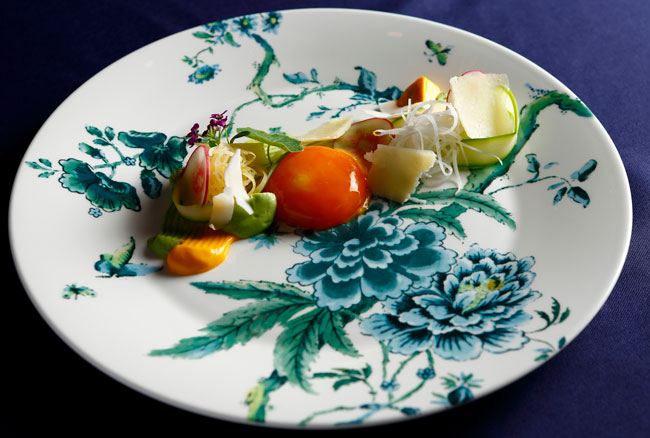 This was followed by akamutsu prosciutto with umami foam and Kamogawa greens, created by Kouichi Hamamura, executive chef at The Gunjo Restaurant, where the dish will be served in April. Set on a tasteful white plate, the ingredients were stacked on top of one another, giving Hamamura’s concoction an intriguing appearance. With the dish so thoughtfully presented, you almost felt bad for eating it—until you took your first bite, that is. 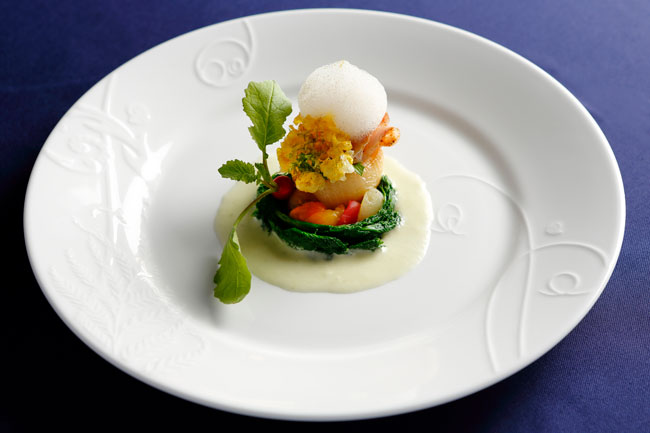 Next came the true showstopper—the genius consommé Wedgwood by the embassy’s executive chef, Frederik Walther. With a pure white egg balanced on a crispy piece of bread straddling a wonderfully decorated teacup containing oxtail soup, guests were delighted by the dish’s eccentric appearance, but initially a little confused about how to eat it. Lifting the egg, however, revealed that it had been hollowed out and stuffed with shredded vegetables, so it could be tipped into the soup. 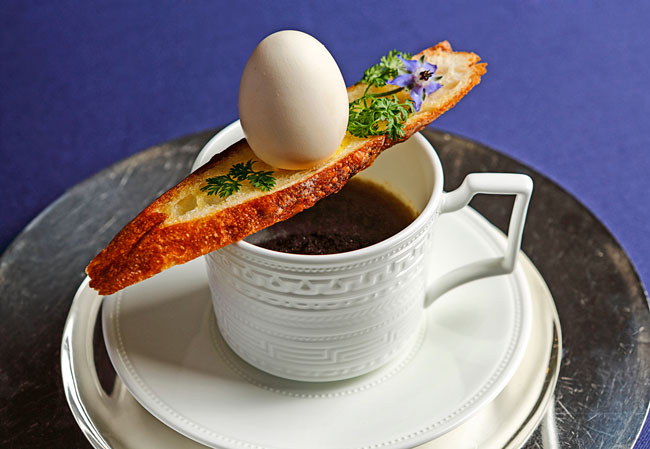 Equally exquisite dishes followed from Kazuhiro Yokoyama, executive chef at Nobu Tokyo, and Trevor Blyth, owner of The White Fox, previously located in Shinjuku. Yokoyama made use of slow-cooked Scottish salmon and “Nobu-style” kinki fish, an unlikely fusion of British and Japanese ingredients, which in many ways embodied the spirit of The Dinner. 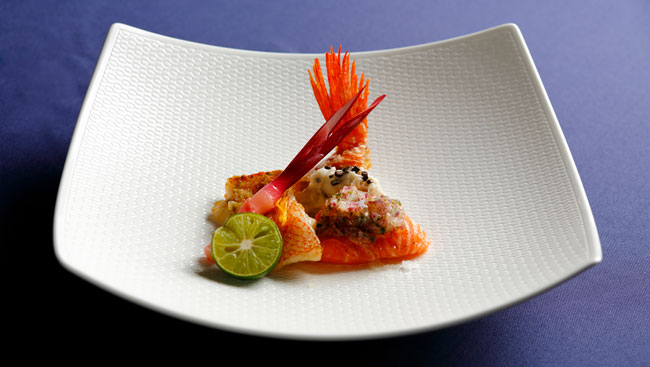 Meanwhile, Blyth prepared roasted and braised rabbit, in the context a more hearty and simpler dish packed with flavour that overturned any lingering preconceptions you might have had about this particular type of game. 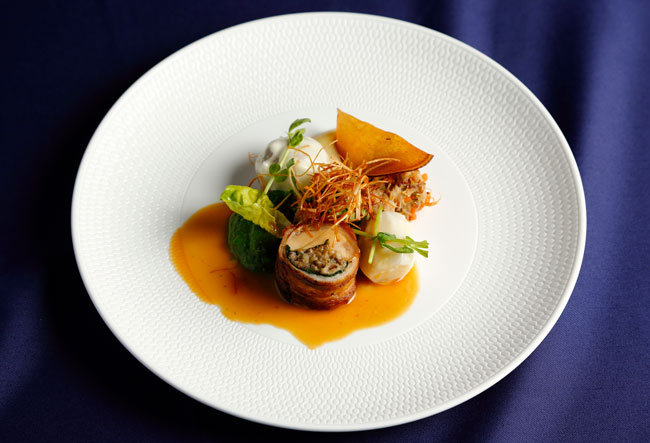 Roast and braised Rabbit and Mountain Potato by Trevor Blyth. 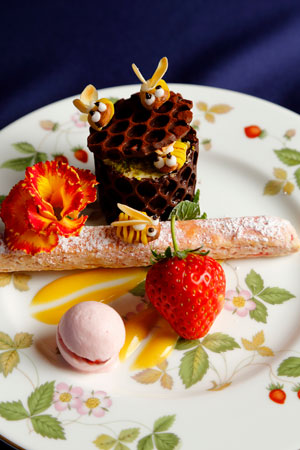 To cap off the stunning dinner, Tatsuki Yoshida from the embassy kitchen served up an intricately detailed dessert, which was a cornucopia of flavours. Made of strawberry scone with Cotswold honey chocolate and natsumikan curd, it was accompanied by a sweet and refreshing strawberry tea ginger ale. Upon being served, guests could not help whipping out their phones in order to get a snap of this wonderful creation, with many remarking on the inclusion of the small “bees”. A dish for social media if there ever was one.

Although the dinner contained plenty of recognisably British elements, it was a clear departure from stereotypical British food. That is in part because of Walther’s work to internationalise the food made by the embassy kitchen. But it is also a matter of ingredients, with many items that a chef in the UK might take for granted being unavailable in Japan. Nonetheless, Walther insisted, “you can cook in a British way”. In any case, progression is the key point.

“You are up against [the fact that] British food doesn’t have the best reputation in the world, so you really have to innovate”, Walther told BCCJ ACUMEN.

“I’ve had the idea for a long time to make a chef’s dinner where six or seven chefs made a course each”, he went on. “So when Wedgwood came with a new plate line I thought, ‘Wow, this is it—now I have a chance’”.

After convincing Wedgwood of his idea, Walther began assembling his team, no easy task given the busy schedules of the chefs involved. Then came the tricky part: assigning a particular plate to each chef. Walther said he “knew before we met who was going to take what plate. They didn’t know that, but I knew it”.

“I knew them all—not completely to the bone, but I had a feeling about what they represented and what kind of food they made and what would work”.

Indeed, as he mentioned, the choice of crockery can have a bigger impact than one might think.

“A plate can ruin a dish, and the dish can ruin the plate”, explained Walther. “When I make a dish, I build it up on the plate in my head, so when I make a menu, I visualise this on this and this plate, and that works together with that and that”.

But that wasn’t the only challenge.

Putting together an effective team is never easy, especially when those concerned are all used to being the boss. 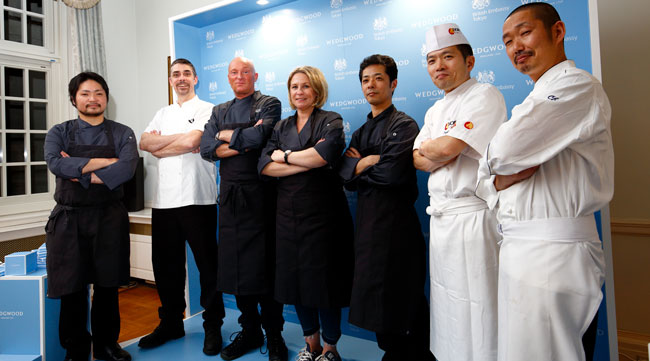 “Often you can put five chefs together and two of them can’t be in the same room”, said Walther. “These chefs are all main chefs. It means they are not used to really doing the dishes, they are only commanding. And suddenly they have to cook, themselves. That was very interesting to see; I learnt a lot as well.

“We turned out to be a cool team when working together, and that’s half the challenge”.

Indeed, the results spoke for themselves. And the embassy’s kitchen continues to grow in stature.

“I know that we are fierce competitors in the embassy world in Tokyo”, said Walther. “They’re talking about us, and I’m happy about that”.