More than 20 firms flew the flag for British cuisine at the Foodex 2016 international food and beverage exhibition in mid-March, with the attendants on the neighbouring French pavilion spotted more than once casting glances at displays of Scottish shortbread and salmon, jams, Welsh cheese, chocolate and—inevitably—craft beer.

The products came from the length and breadth of the British Isles, with the majority testing the waters of the Japanese market for the first time. And, given Japan’s adoration of all things cute, having a larger-than-life Shaun the Sheep gambolling around the stands further helped to attract the crowds.

“I only started the business nine months ago and this is my first trip to Japan, but the reaction in the first two days of the show has been brilliant and I’m very optimistic about this market for us”, said Robert Dark, director of Bath-based Buckingham Cakes. 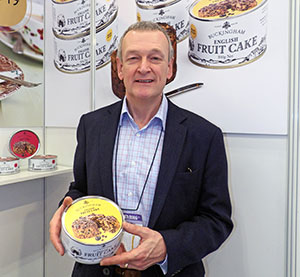 “I started out in the Chinese market and, at the moment, it’s all about promoting the Englishness of the product—its association with afternoon tea and so on—but the Japanese I have been speaking with really get that”, he said.

The firm makes three types of traditional English fruitcake, including a version infused with whisky. The innovation is that each cake is vacuum packed in an airtight tin. Sealing the product means that, “when it is opened, it is as fresh as when it was baked”, Dark told BCCJ ACUMEN. It has a shelf life of 15 months.

“We don’t manufacture for the domestic UK market at all and I’m focused on more distant markets. I’ll be in Singapore in a few weeks’ time, and there is a lot of interest in Thailand and Malaysia—and we need to be able to deliver tip-top products in resistant packaging”.

Dark agrees that much of his work at the moment is devoted to getting a sense of the specific needs of the market. He was surprised to find that Chinese consumers were somewhat put off by the sweetness of the classic British fruitcake.

“But the Japanese love it”, he said, cutting some more sample slices to hand out to the constant flow of food industry representatives past his booth.

“Ideally, I’m here to find a Japanese partner who will be able to distribute our products in Japan, but we are a high-end brand and it will need to be someone who serves the premium stores, the top department stores and the gift stores”, he added. “I’ve met someone who meets those criteria and I’m very optimistic we can reach an agreement”.

The paperwork required by the Japanese government may take a little while to get sorted out, but Dark believes the first shipment could be on its way to Japan soon.

British Ambassador to Japan Tim Hitchens CMG LVO attended the Foodex exhibition on the opening day. He had welcomed the trade delegation to Japan with a reception at the British Embassy Tokyo the previous day, and expressed his delight at news that the UK delegation at the show was to be the largest to date.

“British food and drink are going well in Japan at the moment, and I believe the efforts of these companies have gone a long way to changing perceptions here about our cuisine”, he said. 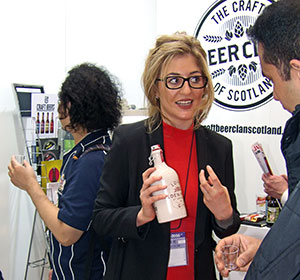 Vicky Miller of Eden Mill brewery and distillery in Scotland spoke to attendees.

At the pavilion, Vicky Miller of Eden Mill in Fife—Scotland’s only combined brewery and distillery—was busy pouring craft beers and samples of traditionally distilled gin for appreciative passers-by.

“We are here with The Craft Beer Clan of Scotland, who are helping us and more than 40 other craft beer breweries into overseas markets”, Miller told BCCJ ACUMEN. “We are very keen to have our brands available in Japan.

“This is our first time here, but it’s absolutely clear that the Japanese are on board with the craft beer movement. We have met a lot of people who have tried our beers and say it’s exactly what they want in their shops or bars”, she said.

“I think the gin market may be lagging behind a bit, but I hear that gin and tonic is starting to take off”, she added. “It may be something of a new concept, but we feel that the classic G&T has spread beyond the expat community in this part of the world and is being taken up by local people—and we are keen to drive that”. 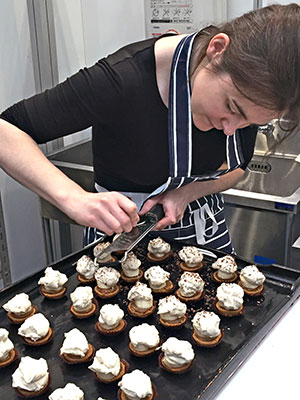 Visitors to the show, held at the Makuhari Messe international event complex east of Tokyo, were also treated to demonstrations of traditional British cake-making by Stacey Ward, founder of Mornington Crescent bakery and baking school in Minato Ward.

During one demonstration, she created an impressive Banoffee pie, which she followed up later in the day with a Battenberg cake.

“I have found that when Japanese people have an interest in something, they are completely into it heart and soul, and it’s the same with cake-making”, said Ward, who set up her firm in November 2013.

“I often have students come to me who have done all the research on a particular cake; they know more about the cake than most Brits do”, she said, adding that one student makes the trip from Okinawa while another regularly travels from Sendai in Miyagi Prefecture for the day.

“The reaction here today has been fantastic. I often get the sense that people are waiting to be disappointed by British food because of the reputation that we have; but I’ve seen here people being surprised at how much they have enjoyed the food on the British pavilion. Hopefully we’ve changed some perceptions today”.