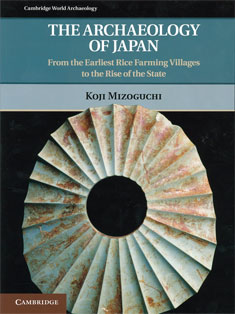 This impressive study covers an extraordinary stretch of Japan’s history, from around 600BC to AD700, embracing both the Yayoi and Kofun periods.

The Yayoi period (generally defined as 300BC–AD300) is named after the area of Tokyo in which relics of the age were discovered. These were principally items of pottery, which were evidently created using a potter’s wheel. Earlier, throughout the Jomon period (13,000–400BC), pots had been shaped by hand.

The Kofun period, which followed the Yayoi, is named for the burial mounds that proliferated at that time, and is generally considered the era when the imperial house of Japan was first established.

Dr Koji Mizoguchi is a professor of social archaeology in the Graduate School of Social and Cultural Studies at Kyushu University. He is considered one of the country’s leading archaeologists, particularly in connection with the Yayoi period and mortuary archaeology.

Scholars in the field probably know him from his many articles focusing on the post-colonial archaeologies of East Asia, with special emphasis on Japan. In January of last year, he was also elected president of the World Archaeological Congress.

This book—at over 350 pages—is a masterful examination of the process by which Japan developed from a rice-growing feudal society (with a technique adapted from the Korean Peninsula) into a national state.

It touches, too, on the mythological origin of the imperial family as set out in the two oldest chronicles, the Kojiki and the Nihonshoki.

Throughout the volume, the author employs a variety of sociological, anthropological and archaeological theories and methods to document a remarkable transition from what was a collection of hunter-gatherer communities to a true nation and, arguably, the creation of what we now consider the Japanese race.

The book is first and foremost a scholarly exploration of the aforementioned periods and a very detailed one at that. As such, it is not an easy read.

It demands close attention and could have benefited from some judicious editing, in terms of removing redundancies and in making the language more natural.

That said, what we get within the pages of this detailed publication is most probably Mizoguchi’s true voice.

The book is neatly conceived in 12 chapters and is heavily annotated throughout. It is also richly illustrated and contains a large number of carefully constructed tables designed to support the research that has gone into the body of the work.

The relatively high cost of this publication is a reflection of the fact that it is definitely not meant for the mass market. It is not a volume for the dilettante.

But we should be glad that the publisher saw fit to include it in the Cambridge World Archaeology series. Serious scholars and others with a genuine interest in the history of ancient Japan will find much food for thought between the covers.