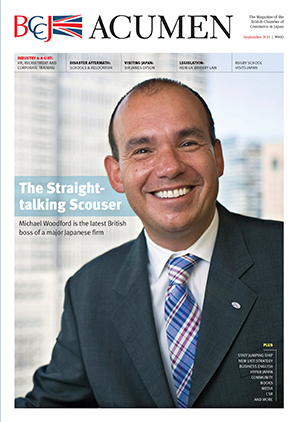 The December 2011 issue of ACUMEN featured an interview with Michael Woodford.

Just days after former Nissan Motor Co., Ltd. boss Carlos Ghosn was bailed after being indicted for alleged financial misconduct, Olympus Corporation’s UK subsidiary lost what may be its final case against Michael Woodford—who they sacked in 2011 after he exposed massive fraud by the firm— for alleged wrongdoing linked to his £64mn (¥9.4bn) pension. If you thought Ghosn was being discriminated against as a foreigner by being detained and unfairly treated before and during trial, you may find the statement on the next page interesting. Nissan has also been in the UK news over its plan to cut brands and jobs at Sunderland, and as Ghosn cannot give media interviews, ACUMEN heard—on the same day as the latest Olympus development—from one of the Japanese players in the Olympus scandal about what it’s like awaiting and undergoing trial for a very long period, accused of financial crimes that he says are trumped up by officials with private agendas.

When Woodford was suddenly ousted, I had been managing a venture capital fund on behalf of Olympus. That included moving the fund’s surplus cash assets about in accordance with instructions from the firm.

In February 2012, the police arrested me, three Olympus directors, and three other individuals from the securities industry.

The prosecutors questioned me and portrayed some of my activities as facilitating accounting fraud. Their case centred on whether I was aware of the accounting fraud at Olympus.

That was the focus of the initial investigation, and it became the focus of the legal arguments in the trial. The experience awakened me to the bizarre character of the officials responsible in Japan for law enforcement and judicial proceedings.

I was convicted and the Supreme Court rejected my appeal on 22 January this year, thereby finalising my four-year sentence. I will report to prison soon and serve my term, minus time already served and any probation—probably to be released after about 15 months.

This hostage justice is a serious blight on Japanese society. But I am writing this statement to describe an even more serious blight: the legal system that wrongly convicted us.

Media organisations based outside Japan have covered the current Carlos Ghosn case with a sense of incredulity. The stories describe the absence of a defence lawyer during interro­ga­tions and the length of the detention. 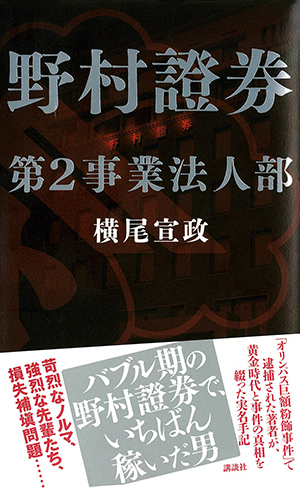 In my case, three Olympus executives confessed immediately to the charges against them, thereby winning release after 40 days of detention. They were later given suspended sentences.

However, Taku Hada, Hiroshi Ono and I protest­ed our innocence and remained in confine­ment. My detention lasted 966 days—two years and 10 months. Hada was held for an identical period, and Ono for 831 days. Detention means no contact with any visitors except lawyers. Detainees cannot have visits from family members or even exchange letters with their loved ones.

For the first 10 months, I made the trip to the court­room fitted with handcuffs and a rope around my waist. The ostensible reason for the physical constraints is to prevent escapes. But the all-too-obvious purpose is to wear down the will of detainees. Those of us who know that we are innocent, and who can withstand the intimidation, persist in refuting the spurious charges. Meanwhile, we lose our income and our social standing while in detention.

Please remember that the detainees in question have been convicted of no crimes whatsoever. The onerous detention is supposedly to prevent us from fleeing the country or destroying evidence. But the authorities could easily address those risks by deploying escorts or by fitting us with GPS tracking devices.

There are five troubling issues with Japan’s justice system regarding how it:

The three main problems are:

1. Fabrication of guilt by prosecutors

In the case against three former Olympus directors for falsifying securities filings, the prosecutors divided the fraud into two periods and arrested the former directors twice—once for each period.

My lawyer pointed out a decisive inconsis­tency in the deposition by the defendant and former Olympus Vice President Hideo Yamada. That was 16 months after my initial arrest, and my trial was to begin the next month.

But the additional charge and arrest, made four days after we cited the inconsistency in the deposition, delayed the start of the trial by five months.

That is how Japan’s prosecutors operate. They routinely fabricate new charges in response to unwelcome developments.

The case against me hinged on the claim that I knew in advance of the accounting fraud at Olympus. My lack of advance knowledge would negate the charge of aiding and abetting the falsi­fi­ca­tion of financial filings and the charges of fraud and money laundering.

The prosecutors offered two pieces of evidence to establish my guilt. One was that I had heard in 1992 that Olympus was carrying ¥45bn in un­realised losses. But knowing there are unrealised losses hardly constitutes knowing that fraud has been committed.

The prosecutors sought to emphasise fraud by asserting that Olympus was keeping the losses off the balance sheet. And the courts that handled the case accepted that claim in the first stage of my criminal trial and in my appeal.

In my criminal case, the prosecutors and judges applied retroactively a year-2000 revision in Japan’s accounting standards. That allowed them to portray me as having known of off-balance-sheet treatment in 1992.

The second piece of evidence that the prosecu­tors used to establish my guilt was the following testimony by an Olympus executive: That he had asked me to introduce a foreign bank that would provide off-balance-sheet financing, that I had there­upon introduced him to the head of LGT Bank’s Tokyo branch at a Roppongi restaurant, and that the Roppongi encounter was the first contact for Olympus with that bank.

However, we introduced evidence in the Gun Ei civil suit, which the court accepted, that refutes that testimony. That evidence is a record of an interview with Olympus’s then-Vice President Hisashi Mori by the firm’s corporate lawyers. The interview took place in November 2011, shortly after the accounting fraud came to light. The Weekly Economist obtained the record of the interview and posted it online in October 2017.

3. The conduct of trials

The December 2011 issue of ACUMEN
featured an interview with Michael Woodford.

Any objective observer can only gasp at how the judges accepted patently illicit presentations by the prosecutors and rendered verdicts based on those presentations.

Especially alarming is the judges’ complicity in establishing dangerous precedents that will allow similarly flawed outcomes in future cases.

As we have seen, the prosecutors’ case against me hinged on the claim that I knew in advance of the accounting fraud at Olympus. And as we have also seen, that claim evaporated in the face of evidence presented in the civil suit.

I deserve a new criminal trial on account of the repeated violations of my constitutional rights. Yet the Supreme Court ignored those rights and rejected my appeal.