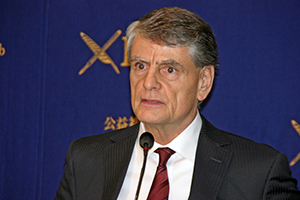 An under-cover investigation by a non-profit environmental group founded in London 31 years ago has revealed widespread fraud that is fuelling Japan’s illegal trade in ivory. Authorities are accused of failing to live up to their commitment to ensure that only legally acquired ivory is bought and sold nationwide.

In a report issued in December 2015, the group, the Environmental Investigation Agency (EIA), claims the system used in Japan to register tusks as legally obtained is “awash” with fraud, which encourages poachers and smugglers to carry on the slaughter of endangered elephants in Africa.

The report reveals that a suspiciously high number of tusks have been registered in recent years, with more than 5,500 of them having been certified as legally obtained and sold on the market in Japan over the past four years.

Under the terms of the United Nations Convention on International Trade in Endangered Species of Wild Fauna and Flora (CITES), Japan agreed to require that all whole ivory tusks imported prior to the 1989 international ban on ivory trade be registered with the government. The Japanese authorities also agreed to require proof of legal origin and acquisition.

An investigation carried out in the summer of 2015 by the EIA, however, indicates that the system is essentially useless, said Allan Thornton, president.

“The point of the scheme is to be able to detect illegal tusks that come onto the Japanese market”, he said.

The EIA began to become concerned at the increased number of tusks being registered, and set about “testing the integrity of the registration system”. The operation involved a woman contacting 37 firms that advertise themselves as ivory dealers.

Her cover story was that she had inherited an unregistered tusk from her father. Critically, the woman told the dealers that it had been acquired after the CITES ban.

“We expected to find a few bad apples and some illicit activity, but we were shocked to find that 80% of the companies we approached offered to provide some sort of illegal activity”, Thornton said.

The illegal proposals included offers to falsify paperwork to make the tusk meet registration requirements, have the tusk registered under a false name or ask the trader to purchase the tusk and immediately cut it, reselling the finished works.

All that is required is a written statement by a person who owns a tusk to say where and when they acquired it, and a document supporting that claim, which can be as simple as a statement by a third party. Beyond that, there are no further checks conducted to verify the registration.

“It was quite shocking”, Thornton said. “The registration system was put in place to identify and stop these tusks coming onto the market [in Japan], but it is actually facilitating that trade”.

Even more worrying, the Japanese government has been aware of the loopholes in its system. In 2001, the Japan Wildlife Research Center provided the Ministry of the Environment with details of the ways in which the system could be abused.

“We conclude”, Thornton added, “that the government of Japan has not met its legal obligation that it agreed by signing the convention on the trade in endangered species”.

According to a government report, issued in May 2014, there were 7,570 registered ivory retailers in Japan, as well as 300 firms that made items from ivory and more than 500 wholesalers.

Much of the trade today is carried out over the Internet, with Yahoo! Japan and Rakuten Ichiba listing tens of thousands of ivory items for sale.

A further study by the EIA monitored transactions on one site over 24 hours in August, and found more than 6,000 adverts for ivory products—such as hanko (name seals), netsuke (miniature figurines) or bachi (the plectrum used to play the biwa and shamisen)—with a sales value of ¥559.2mn.

“There seems to be an almost complete absence of control over the ivory trade here, and companies are operating quite openly”, Thornton said.

The CIE has submitted a dossier on its study to the Japanese police and is calling for an investigation into the firms that are operating illegally. Similar dossiers have been given to the ministries of the environment, trade and foreign affairs, according to Thornton.

Asked what their reactions were, he said they seemed “surprised”.

Environmental groups have reported another upsurge in poaching in Africa, with an estimated 50,000 elephants killed for their tusks annually. The rarer forest elephant species, which are found in just six African countries, suffered a “catastrophic decline” of 65% between 2002 and 2013, according to the EIA.

The distinctive “hard ivory” from these species is particularly sought in Japan.
“The situation is dire”, the EIA report concludes.