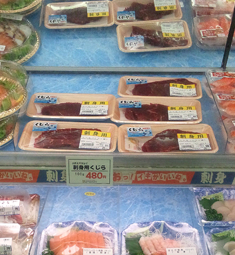 Whale meat sold at a Japanese market in 2012.

The research, carried out by Japanese firms, is the first to make use of official government statistics. It paints a very different picture from that which whaling authorities have presented, based on the same figures.

Entitled The Economics of Japanese Whaling: A Collapsing Industry Burdens Taxpayers, the report uses official statistics to disprove the claim that commercial whaling is a cultural and nutritional necessity for the country.

Also noted is the fact that, although Japan’s whaling fleet is subsidised to the tune of some ¥782mn per year, the non-profit Institute of Cetacean Research operates at an annual loss.

At the same time, today’s consumption of whale meat by members of the Japanese public is around 1% of its peak during the early 1960s. There are now nearly 5,000 tonnes of unsold whale meat—more than four times the amount stockpiled 15 years ago.

This is despite an advertising campaign and auctions that have failed to shift the surplus whale meat.

Further, the study claims that “the Japanese government has engaged in a concerted effort to change the direction of the International Whaling Commission [IWC] by recruiting new members to vote on its side”, by linking Official Development Assistance to support votes.

Atherton Martin, the former fisheries minister for the Commonwealth of Dominica, accused Tokyo of extortion and resigned in protest after his country voted in favour of Japan at the IWC.

The claim that Japan conducts valuable “scientific whaling” also is shown to be a lie. Despite Japan’s slaughter of some 14,000 whales since 1988, the IWC’s science committee found that the research hasn’t achieved any of its stated objectives.

A section of the study is devoted to the appropriation to the whaling industry of funds that had been designed to assist communities affected by the 2011 Tohoku earthquake and tsunami. It is pointed out that some ¥2.28bn was diverted to supporting “research whaling, stabilisation promotion and countermeasure expenses”.

Over the past 25 years, direct subsidies to the whaling industry from the Ministry of Agriculture, Forestry and Fisheries alone have cost the Japanese taxpayer more than ¥30bn.

In addition, the study shows that the Japanese public is not particularly keen on the final product.

Meanwhile, more than 54% of respondents are indifferent to whaling, while only 11% replied that they are strongly in favour of Japan continuing its whaling programme. Fully 89% have not purchased whale meat in the last 12 months, and 85% indicated that they were opposed to billions of taxpayers’ yen being spent on building a new factory ship.

“The good people of Japan are paying billions to support a dying industry”, said Patrick Ramage, director of the IFAW’s whaling programme. “If [the Japanese] government wants to generate income and help coastal communities, it should support whale watching instead.

“Whaling is an economic loser in the 21st century”, Ramage added.