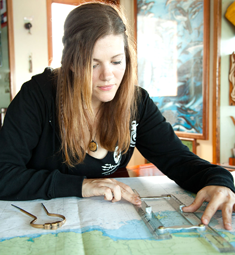 Gillian Graham spent Christmas away from her family saving the whales.

As her family unwrapped presents and enjoyed the other traditions of the festive season in Ramsgate, Kent, 28-year-old Graham was scouring the horizon of the Pacific Ocean from the bridge of the Sea Shepherd vessel the Steve Irwin.

It was tough to be away from home at that time of year, she admitted. But, if doing so resulted in frustrating the Japanese whaling fleet’s attempt to conduct its annual “scientific whaling” slaughter, it would be worthwhile.

“I’m very fortunate that my family support me 100% in what I do”, she told BCCJ ACUMEN from the Steve Irwin. “They know how important this is and that I love them dearly.

“But it has been a very challenging time for me as I was away from my daughter, Chloe, for the first time this Christmas”, Graham added. “She supports what I am doing and is a huge advocate of Sea Shepherd.

“She already wishes she was here. I hope that, when she is old enough, we will no longer need to travel to Antarctica to protect the whales”, she added.

Graham is on the board of directors of Sea Shepherd UK, an international non-profit, marine wildlife conservation organisation. Its mission is to end the destruction of habitats and slaughter of wildlife in the world’s oceans, in order to conserve and protect ecosystems and species.

As quartermaster on the Steve Irwin, her duties at sea include navigation, assisting in the co-ordination of small boats and a helicopter, the day-to-day running of the bridge, and keeping a constant look out for the whaling fleet.

Officially a member of the organisation since January 2012, Graham’s first foray into the front lines with Sea Shepherd is with their biggest campaign yet—Operation Zero Tolerance. It aims to send the whalers home without them killing a single whale.

She also works with other UK-based marine organisations, including the British Divers Marine Life Rescue, as a marine mammal medic and instructor for new medics. While volunteering as co-ordinator for the charity UK Cetacean Stranding Investigation Research, she earned an income working for Lush Co., Ltd. and outdoor goods store Blacks Outdoor Retail Ltd.

After returning from Operation Zero Tolerance, she will continue working to fulfil her ambition of becoming a marine biologist and zoologist.

Asked why she supports an environmental organisation that has a reputation for being more direct in its actions than other groups, which also seek to halt Japan’s whaling programme, Graham said she believes there is a huge difference in the way in which Sea Shepherd operates.

“I know and can trust that every penny raised by Sea Shepherd goes directly into raising awareness about, and the funding of campaigns to protect—and prevent the illegal slaughter of—whales in the Southern Ocean Whale Sanctuary”, she said.

“Many other anti-whaling organisations spend a huge part of their funds on staff, advertising and other expenses”, she explained.
“Those outlays leave very little in the way of funds for the intended cause.

“When it comes down to the simple truth of it, Sea Shepherd is the only anti-poaching organisation that is actively going to the Southern Ocean Whale Sanctuary to protect whales and prevent the illegal slaughter of endangered and protected species”.

Graham also refutes the claim that Sea Shepherd’s methods are designed to cause injury to whalers.

“The phrase ‘direct action’ can sometimes be looked at in a negative light. People ask how far the crew are willing to go to stop the Japanese whaling fleet”, she said.

“We respect all forms of life, and have no intention of causing harm to human or animal life, and will always work to the best of our abilities to protect all living things.

“We will continue to uphold maritime law and do all we can to protect our oceans”, she added. “To go too far would mean causing deliberate harm to others and breaching the laws that we are upholding. We have no desire to do that”. 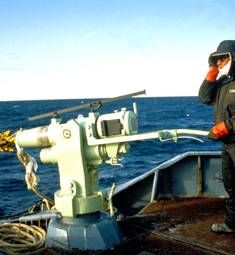 Whalers on the Kyo Maru No. 1 use high-powered harpoons to hunt in the Southern Ocean Sanctuary.

Sea Shepherd’s actions have saved an estimated 3,600 whales in the Southern Ocean Whale Sanctuary—a 50mn2 km area of ocean where all forms of commercial whaling are banned by the International Whaling Commission (IWC).

Japan evades the ban by claiming that the whales its fleet harpoons are part of its research programme.

“I find their ‘scientific research’ frustrating, to say the very least”, said Graham. “They use the loophole within the IWC’s moratorium to illegally slaughter thousands of endangered whales in the name of science.

“There are scientists all over the world who study whale diet, behaviour, species numbers and so much more”, she pointed out.
“Yet they do this all without harming a single whale. They also openly discuss their findings and will give a breakdown of the exact purpose of their research.

“In my opinion, the Japanese whaling fleet and government use scientific whaling as a way to get the by-product of their scientific research—whale meat—to sell at low cost and encourage the public to eat more [whale meat] in the hope that they will support their plans to bring back commercial whaling”.

The Steve Irwin and Sea Shepherd’s other vessels left port on 5 November with morale “high” aboard the flotilla, according to Graham.

“We all are positive that this year we once more can stop the whaling fleet meeting their quota. We sincerely hope that they will come away with zero kills this season”, she said.