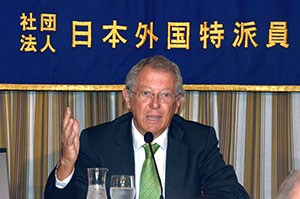 Nothing less than “the future of our civilisation” hung on the United Nations Climate Change Conference in December, said Sir David King, the British foreign secretary’s special representative on climate change, ahead of the landmark meeting.

King was in Tokyo in July for a series of meetings with his Japanese counterparts, during which he stressed that safeguarding our natural environment is “the single most important diplomatic issue—not of the year, but of the era”.

There was added significance to the Paris meeting, given the squabbling that had erupted during the 2009 Copenhagen Conference on carbon-induced climate change.

“The world cannot afford another Copenhagen”, said King, who was the chief scientific advisor to the British government between 2000 and 2007. “We have a chance in Paris of reaching agreement on what is civilisation’s biggest challenge”.

Advances in healthcare mean the planet’s population is growing by one billion people every 12 years, with better living conditions being the second-biggest factor in the decline in child mortality. By the middle of the century, earth will have nine billion residents, and it’s really a question of the planet’s ability to operate with that number, King said.

“The challenges are multiple”, he added. “It’s providing food, fresh water, and using landmass carefully so we can manage these processes.

“So, as we move through this century, we have a series of new, 21st-century challenges”, he said, adding that, “the global growth model of the 20th century that we were so comfortable with is actually not fit for purpose in the 21st century. We need to be operating a totally different approach”.

Greenhouse gases are causing temperatures to rise, resulting in the melting of ice caps, rising of sea levels and inundation of coastal regions. A total of 196 nations have agreed to the Copenhagen and Beyond agreement, under which global warming needs to be kept below 2 degrees Celsius.

Failing to act on climate change now—following the business-as-usual model—is projected to raise global temperatures by as much as 6 degrees in the next 100 years. If that happens, King said, “Frankly, we’re cooked”.

Aside from rising temperatures, the major worry is rising sea levels.

“We are an island nation, like Japan, and as the sea level rises we lose landmass”, he said. “London is not only on the ocean front but it is also on the Thames River. When we have storms at sea, when we have storms inland, our major rivers flood and this can lead to major flooding of our cities. As we move through this century, the defence of major cities sitting on coastlines around the world will become more and more challenging”.

Models suggest that Calcutta will be the first major city to be inundated, followed by Shanghai and London.

The threat is increasing, he said. Initially, the problem was due to the oceans expanding. Now, however the ice at the poles is melting.

“If all the ice in Antarctica and Greenland melted, we’re talking about a 100 meter sea-level rise. But if only the ice on Greenland melts, then we will see a seven-meter rise in water levels all around the world and all our coastal cities will go under water”.

The conservative estimate of sea level rises by the end of the century is close to half a meter, while a recent paper on the loss of the Greenland ice cover suggests it is reaching a tipping point beyond which existing technology would not be able to reverse the loss of all Greenland’s ice cover.

This tipping point is between 450 and 550 parts per million of greenhouse gases in the atmosphere. At present, King said, we are at 400ppm. Even stopping at 450ppm is already “teasing into the region where we would begin to lose all Greenland ice”, he said.

Nevertheless, King was hopeful—with caveats—that the UN meeting in Paris would be a success. At first glance, those hopes appear to have been borne out.

“I don’t think we are likely to see a repeat of Copenhagen and I say that because we have had China and the US jointly agreeing on action to reduce emissions”, he said ahead of the meeting.

“Delegates at the G7 and heads of government meeting in June said they would decarbonise the global economy this century; we are stating that this is the end of the fossil fuel era”, he said.

“A second statement—which I believe is more important—was the announcement of the coordination of research and development into renewable energy sources, energy storage and smart grids, so we can create electricity more cheaply for all parts of the world than with fossil fuels.

“If we achieve that objective within 10 years, then we will be winning the game”, he said.