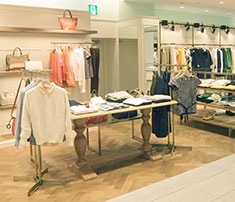 Shops are decorated with the brand’s signature hues.

In 2007, apparel manufacturer Sanyo Trading concluded a licencing contract with Mackintosh. The Nikkei Marketing Journal (18 April) reports the UK brand, established in 1823, is becoming especially popular among consumers in their 30s.

At the end of February, a shop in Fukuoka City was redesigned to project the Japanese distributor’s new “Mackintosh philosophy”. The interior walls are draped with the brand’s signature red, navy blue and beige tartan pattern, which has been used in items such as scarves and slippers.

Sanyo began selling women’s products in spring 2008, but demand for menswear was initially disappointing. However, Trotter jackets, which were introduced in 2010, scored a hit among men, and a total of 50,000 have been sold. The item proved particularly popular with businessmen and has helped to boost brand familiarity.

After expanding the men’s collection to include trousers and shirts, the firm began receiving requests to set up sales spaces in department stores. By the end of 2011, there were 36 such outlets, and sales had nearly doubled from the previous year, when only 20 department store units had been in operation.

This autumn, retailers will offer coats priced from ¥44,000 to ¥140,000. Next on the agenda is a new licencing contract for the Mackintosh London line of deluxe men’s and women’s garments, scheduled to make their appearance in shops by autumn 2015. 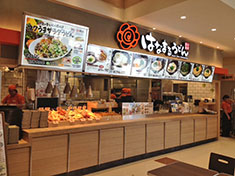 To stimulate demand and keep consumer morale from flagging following the increase in the consumption tax rate from 5% to 8% on 1 April, retailers and service providers have been adopting a variety of promotional gimmicks.

Nikkan Gendai (5 April) reported that at branches of Seiyu supermarkets, customers were informed that if they were dissatisfied with any merchandise, on presentation of the receipt they would be given an immediate refund. The programme applies to such fresh food items as meat, fish and vegetables.

“The full refund programme was initiated by Walmart stores in the US and was the first of its kind in the world”, a Seiyu spokesperson was quoted as saying. He added that the system has subsequently been adopted by supermarkets in Canada, Mexico and the UK.

Meanwhile, until 8 June, patrons at Suntory-operated restaurants will be eligible for a drawing with a top prize of ¥100,000. During the first six days of April, Sogo-Seibu department stores offered lucky bags marking the advent of spring (and called haru no fukubukoro), a practice normally only conducted to mark the New Year holiday.

Seven-Eleven convenience stores issued double points for users of Seven & I Holdings Co. electronic payment service cards, called “nanaco”, during the month of April. And Megane Ichiba, a retail chain (with 56 outlets in Tokyo) that sells eyewear, offered a ¥1,000 discount on purchases of two or more items. The offer ended on 6 May.

QB House barbers have targeted seniors; those who can show ID proving they are over 65 can waive the ¥80 consumption tax on services costing ¥1,000.

In one of the most creative promotional efforts so far, until 13 April, the Hanamaru Udon noodle restaurant chain offered customers 8% more noodles per serving, but kept prices the same. 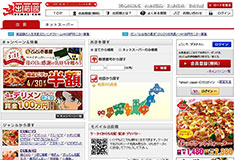 One of the fastest-growing businesses you’ve probably never heard of is Demae-can, an internet-based home delivery food service founded in Osaka in 1999. The online business currently operates 12,000 outlets nationwide, with subsidiaries in Seoul and Beijing. Its sales revenues last year, reports Nikkei Business (24 March), were nearly double those of 2012.

While standard fare ranges from bento to burgers, the firm said its sweets division grew the fastest last year. Orders of pancakes, an item particularly popular with women, nearly tripled in 2013, and demand has also been steady for “ethnic” dishes and kamameshi (individual portions of rice, meat and vegetables steamed together in a small pot).

Menu diversification is serving to banish the widespread impression that home delivery foods are confined to sushi and pizza.

Demae-can’s main appeal to consumers is that it gives them the sense of eating out while dining at home. Another key factor behind the site’s success is its offering of single portions, with no minimum fee per order. One-person orders have grown from around 10% of total demand 10 years ago to 25% at present.

The firm has even created a special menu for single diners; Chinese-style dishes and curry with rice are currently the most popular items.

Earlier this year, Demae-can launched an experimental campaign that extended hours of operation to cater to late-night snackers. Whereas previously orders were accepted up to 11:45pm, about one-fourth of Demae-can’s outlets agreed to extend deliveries to as late as 2am.

The move was aimed at catering to students cramming for university entrance examinations, but also found unexpected favour with company employees who get home late after working overtime. The campaign proved so popular it was extended for an additional 30 days, until the end of March.

Two other firms, Tokyo-based Thali-ya (specialising in Indian cuisine) and Hokkaido-based Co-op Sapporo (part of an agricultural cooperative) have also been making headway in their respective markets.

While Japan’s food and beverage industry continues to struggle, services delivering prepared and semi-prepared foods to customers’ homes have been growing around 4% annually. 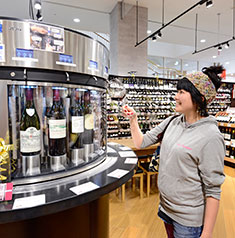 Premium labels can be tasted by the glass in Aeon supermarkets.

Although overall consumption of alcohol has been declining in Japan for some time, sales of wine in 2014 are projected to rise for the sixth consecutive year, with demand exceeding 350,000kl. A key factor behind the growth, reports Nikkei Marketing Journal (11 April), is increased consumption in homes.

Direct imports by major retail chains such as Aeon supermarkets have made it possible to keep prices low. The chain has also installed a large wine dispenser in its store in Makuhari, Chiba, where premium labels may be tasted by the glass.

“We have more opportunities to drink wine at home with our evening meals”, a 45-year-old housewife is quoted as saying while shopping.

Seijo Ishii, another supermarket operator, has some 1.5mn bottles in climate-controlled storage at any given time.

Considering that wine accounts for only 5% of Japan’s total consumption of alcoholic beverages, considerable potential remains for future growth.