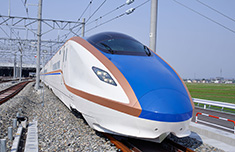 The Hokuriku Shinkansen is set to launch in March.

Nikkei Trendy (December) has forecast products and services it expects to be most successful in 2015. The predictions focus on key words that marketers will use to sell their products this year.

“Yuru & toku health”
The system discouraging labelling that makes health claims is expected to be dropped. This would open the way for the sale of functional foods, a term used to indicate the item contains ingredients that aid specific positive bodily functions.

“Enjoyable penny-pinching”
Local governments and businesses are seeking new ways to be frugal while still achieving their aims. To thank taxpayers, who are producing goods that contribute to the local economy, towns and villages are holding parties at the cost of ¥2,000 per guest.

In an attempt to attract customers, businesses in cities are adding touches of sophistication that require only small outlays.

“Magic for customers”
New goods requiring little effort are available for the self-indulgent. From House Foods Corp. comes Mazete Magic, a seasoning designed to be mixed with leftovers to make them more palatable.

Kewpie Corporation has introduced an egg salad mix that can be simply squeezed on the plate from a pouch.

Mitsubishi Electric Corporation has its SH-JX1 humidifier, designed for use at night next to a sleeper’s bed. Demand for the humidifier is seen as reflecting the self-focused phenomenon.

Orders for smartphones designed for self-photography are also expected to soar this year.

“Evolution of ‘better’”
A good example of this would be the PREMIUMTM cup, developed in a tie-up between Nippon Paper Industries Co., Ltd. and Dixie Japan Ltd.

The cup eliminates nearly all the characteristic smell of paper, thereby allowing the natural aroma of beverages to be more easily appreciated.

Some 80% of those who took part in sensory tests expressed satisfaction with the new cup.

“Long-awaited sure winner”
Toyota Motor Corporation’s FCV, the first passenger car to be powered by fuel-cell batteries, carries the hope that Japan will wrest back market share from its rivals.

The December issue of the magazine devoted two pages to the expected impact of the planned increase in the consumption tax rate to 10%, albeit its implementation has been indefinitely postponed.

The January issue of DIME, another magazine that covers trends, also ran its predictions of products expected to enjoy high consumer demand this year.

They include televisions with 8K resolution, the highest ultra high definition available; hydrogen-powered fuel-cell vehicles; Taiwan-style confections; multi-sensory entertainment, such as theatres where the seats oscillate violently in sync with action scenes; and the new Hokuriku Shinkansen.

The service between Tokyo and Kanazawa, Ishikawa Prefecture, is set to commence on 14 March, cutting travel time from nearly four hours to two hours and 28 minutes, and daily passenger numbers are projected to reach 23,000 during periods of high demand.

They include Morinomiya Q’s MALL BASE, built on the former site of a baseball stadium in Osaka’s Chuo Ward; an aquarium and marine park in Sendai, Miyagi Prefecture; and a shopping centre with 240 commercial businesses in Tokyo’s suburb of Tachikawa City.

The Dai Nagoya Building, adjacent to the main railway station, is expected to reopen in October following reconstruction.

The Hotel Okura Tokyo will close its doors on 31 August. It will be demolished, replaced by a new hotel and commercial space, and reopen in spring 2019 ahead of the Tokyo 2020 Olympic and Paralympic Games. 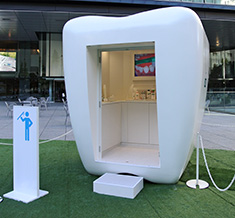 The “G·U·M CUBE” is produced by Sunstar.

an oral care star is born

It has become a common practice for office workers, particularly women, to brush their teeth following their midday meal.

To promote its oral care products, Osaka-based toiletries manufacturer Sunstar Group set up what may be the world’s first free “Public Brushing Booth” on 2–3 December, in an open space adjacent to the Tokyo Sankei Building in the Otemachi business district.

Operating hours were 11am–8pm, with the busiest period following lunch.

In addition to running water and mirrors, the space featured a monitor screen on the wall that explained proper brushing techniques.

The firm also made available 2,000 complimentary sets of its G·U·M toothbrushes and toothpaste, and used the booth to promote its G·U·M liquid dental rinse and interdental Soft–Picks®.

According to a spokesperson for Sunstar, “Many of the users were people away from their workplaces, who would otherwise have had difficulty finding a place to brush their teeth”.

As in previous years, Nikkei Business (3 November) published a special feature on the subject of customer satisfaction in 2014, with a focus on after-sales service.

Although the phrase carries an image of repairing defective or broken products, its meaning can include developing a rapport with customers.

Take WOWOW, a movie channel that initiated “thanks calls” by telephone to selected new subscribers. The service introduces them to programmes they are likely to want to see, and notifies them of the most convenient viewing times.

Thanks calls are said to have helped to pare down considerably the number of subscriber cancellations.

The same system had already been launched by Amazon subsidiaries in other national markets.

Nikkei Business sees these innovations as typical of the firm’s assertive business strategy, which explains the remarkably high 92.2% favourable response in terms of customer satisfaction.

More attentive customer support will be a prerequisite for Amazon’s expansion through business tie-ups, such as the agreement with the consortium of 30 furniture manufacturers in Kyushu that supplies items to www.okawakagu.com.

The collaboration has even led to development of a new type of post box that can accommodate deliveries when the recipient is not home to accept the package from the delivery agent.

Meanwhile, last May, in an attempt to address possible problems, Sharp Corporation set up a call centre that customers can contact when they have problems with their flat-screen TV or Blu-ray recorder.

The service was initiated as more purchasers of TVs have begun to connect their TV receivers to the Internet. The firm claims the new service has reduced the average time spent consulting customers on their problems from 14 minutes to seven.