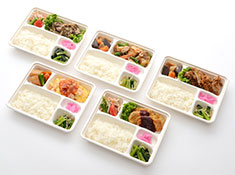 Japanese people have taken to the e-commerce market with a vengeance. Total revenues in 2013 reached ¥15.9trn, surpassing the ¥12.7trn in sales for supermarkets and general retailers, ¥9.4trn for convenience stores and ¥6.2trn for department stores.

Over the next two years, sales by the two market leaders, Rakuten Ichiba—the online site of Rakuten, Inc.—and Amazon Japan, are expected to increase from ¥1.7trn and ¥1.1trn to ¥2.5trn and ¥1.6trn, respectively.

By 2015, e-commerce transactions are projected to increase to ¥20.1trn. With ¥4trn in growth at stake in 2014–15, Nikkei Business (11–18 August) is predicting anarchy in the e-commerce sector, as established players contend with new entries.

Driving growth will be business via smartphones. One example is Line Mall. Launched in December 2013 by Line Corporation—a provider of message texting and other applications that claims to have 480mn users worldwide and 52mn in Japan—the service is still in a tentative testing stage.

However, more than two million applications are reported to be available for downloading, despite the firm not having engaged in advertising or sales promotion.

The message service provider has also diversified into distribution.

From 30 July, in a tie-up with mail-order firm Felissimo, Line began “Line Delivery” services that charge a uniform rate for nationwide deliveries. The charges vary according to dimensions but, if width and depth measurements are in total less than 60cm, the charge is ¥650. This is cheaper than fees charged by major transport firms.

“In a few years, sales via smartphones will eclipse sales via personal computers”, said Takeshi Shimamura, Line’s senior executive director and head of commerce and media.

The resale shopping app Mercari was launched by Shintaro Yamada, Mercari’s president and chief executive in July. Its key feature is a furima (flea market) that permits the seller and potential purchaser to haggle over the price.

The firm began its TV advertising in May and claims it had surpassed 4mn downloads by July. Monthly turnover has already exceeded ¥1bn, with over 100,000 items moved each business day.

Another new type of business can be found at the website bento.jp. Its ¥800 bento (boxed meals)—the menus of which are changed daily—can be delivered to the home or office of the customer within 20 minutes of receiving an order.

The service has been in operation since April in the Roppongi and Shibuya districts of Tokyo, and gets several hundred orders a day. Sales margins are slim, however, since the firm outsources production of the meals. Its chief executive, Atsumasa Kobayashi, explained that bento are merely a test item to give his new firm experience in the field.

Bento.jp is striving for extremely fast distribution of orders of other products from customers located close by, as well as innovative ways to pare its costs. 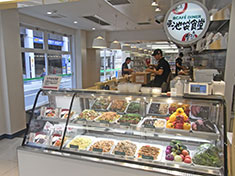 Dishes from snack bars can be consumed on the premises or taken away.

According to the Weekly Diamond (6 September) this sector of retailing accounts for ¥10trn in annual turnovers. With a total of 50,000 outlets nationwide, some analysts have voiced the opinion that the growth of convenience stores has peaked.

But moves to diversify may soon alter that view. One growth trend over the past half decade has been the setting up of convenience stores in rail stations.

In the past, the firm had resisted invitations for such business ventures, since such a move would not allow the firm to operate around-the-clock as stations close after train services have ended.

As convenience stores in Japan are limited by statute to a fixed floor area, another new and growing trend is to have korabo (collaboration) shops.

In the case of Lawson, the stores are joined to pharmacies that, in addition to sales of over-the-counter medications, are also licensed to dispense prescription drugs. At Lawson’s Yushima station outlet, in Tokyo’s Bunkyo ward, the number of items for sale has more than doubled—to about 5,600—compared with standard-sized outlets.

Management apparently is content to use the pharmacies to attract customers, who purchase take-out food and other merchandise. Since its conversion to a korabo enterprise in September 2013, the shop’s sales have reportedly risen 1.5-fold. Lawson management has announced plans to have 500 such outlets in operation over the next three years.

Familymart has adopted a different collaboration strategy of not limiting tie-ups to any one retail sector. For instance, in April of this year, the firm tied up with Daiichi Kosho Co. Ltd. to install self-service Karaoke Club Dam units.

The arrangement permits customers to take in and consume items purchased in the convenience store on the premises. Another scheme, initiated in July, is a tie-up with Fujio Food System Co. Ltd. to operate Maido Okini Shokudo snack bars. Dishes prepared in open kitchens on the premises can be consumed there or taken away to be eaten at home.

Initially concerns surfaced that the snack bars on the premises would drain off convenience stores’ sales of boxed meals and other prepared food; but, according to a spokesperson for the firm, that has not been the case.

Apparently, people who dine there in the evenings pick up bread and other items for their breakfast the next morning so, if anything, sales have increased. Familymart aims to have 300 collaboration outlets in operation over the next five years. 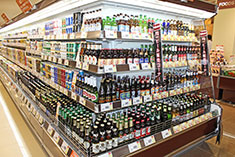 Over the past decade, sales channels for beer have been changing, suggesting shifts in preferences and consumer segments, reports the Nikkei Marketing Journal (5 September). In recent years, the younger age groups have been showing greater preference for wines and whiskeys.

One factor in supermarket sales growth is believed to be the relatively long shelf life of beer, which means purchasing it from supermarkets by the six-pack or case brings cost benefits.

But, beer firms nevertheless feel that convenience store channels bring them benefits in terms of greater brand or label recognition. In the future, therefore, breweries will be emphasising development of new limited-edition products and specialty labels.

The 8 September issue of the same publication reports that imported beer labels are also gaining sales. Some medium-sized supermarkets, such as Yaoko Co., Ltd., based in Kawagoe City, Saitama Prefecture, which operates 133 outlets, stock up to 60 varieties of beer from Europe and South East Asia.

Although imported bottled or canned beer typically costs from ¥300 to ¥500—as much as double the price of domestic brews—the firm reports that by offering products not sold in convenience stores, it has increased beer sales by more than 40% on the previous year.

Earlier in 2014, Seiyu shops, part of the US’s Wal-Mart Stores, Inc., began sales of imported beers from UK supermarket chain ASDA. The firm sells Extra Special Golden Ale in a 500ml bottle at the bargain price of ¥150, and Spitfire Premium Kentish Ale at an affordable ¥189.